Octogenarian takes to the skies for charity wing walk

An 89-year-old former paratrooper took to the skies to celebrate his birthday, completing a wing walk in aid of Bristol Children’s Hospital.

John Wilkins has been supporting the hospital’s Grand Appeal for more than 20 years – raising more than £350,000 to support sick babies and children across the South West and South Wales. 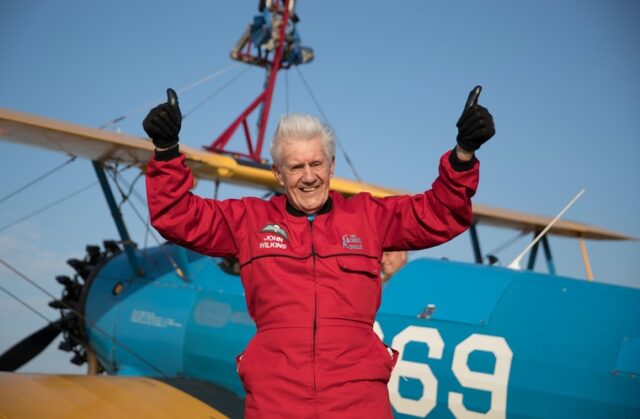 He had been due to complete his latest fundraising challenge on his birthday in April, but it was postponed because he was shielding.

Mr Wilkins said: “After a strange few months, it has been great to be able to take to the skies again and start fundraising for this amazing charity again.

“It’s been an honour to work so closely with the charity over the years and I hope to inspire more people to try something a bit different to help raise money for The Grand Appeal, a charity that despite the challenges of the pandemic, has continued to provide incredible services to support the patients, families and staff at the children’s hospital.”

Previous challenges Mr Wilkins has completed include abseils, zip wires and skydiving. Mr Wilkins also set up the charity’s parachute jump in the late 90s, and more than 550 people have joined him in the skies over the years.

Alongside this, he has spent 19 years running a charity stall in the foyer of the hospital.

Steph Benson, community fundraiser for Wallace and Gromit’s Grand Appeal said: “It is incredible to see John’s continued dedication to raising money for the charity and we really enjoyed sharing his belated birthday celebrations with him in true adrenaline-fuelled style.

“Our charity skydives and wing walks are the first in-person fundraising events we’ve been able to host since lockdown so we’re incredibly grateful to all our fundraisers who are taking to the skies this weekend.”

Donations in support of his wing walk can still be made online: https://www.justgiving.com/fundraising/rachel-ferris9?

Coronavirus vaccine unlikely to be available in Britain before spring - adviser