Team Gibraltar women’s cycling team were dealt an early blow when Elaine Pratt was caught in a collision towards the end of the first lap which eventually saw the pairing of Pratts and Lett reduced to just the latter.
Olivia Lett was, however to provide a fine performance in endurance and resilience keeping pace with the main peloton for the better part of the 112km course. Only falling behind in the final leg as the top runners pushed in harder to end with a sprint finish which was to be won by Australia’s Barker.
Elaine Pratt, who had been doing well keeping alongside Lett in the first lap was caught in a collision as they rode as a pack in the early part of the second lap.
Frustratingly for her she had to wait for a wheel change which saw her fall behind some two minutes, enough to see her lose contact with the main peloton. A gap she would not be able to regain.
The pack had been riding closely together throughout the first lap with the two Gibraltar riders staying at the rear end of the pack but within it throughout.
The accident saw Elaine get back up after a wheel change and took on the rear end riders and passed several of them to try and work her way to rejoin the back of the pack which was to prove to be a tough challenge. Already three of the five who had been involved in the collision had worked their way away from her making her journey a tough one, riding alongside the Jamaica rider to cross the line at the end of the second lap together.
In the meantime Olivia Lett kept pace with the main pack still sitting at the rear of the pack.
At the front groups of riders tested for a break away from early on accelerating the pace at times but seeing the chasing peloton bringing the pack together again as they worked tactically to stop break aways.

Into the second lap the attempted breakaways saw the pace increased the main peloton saw a bigger gap between the front runners and the rear although still working as a pack.
Olivia Lett was to keep up with this peloton sitting comfortably in the rear of the pack.
This allowed her to ride outside the tightly packed centre of the peloton which posed a risk for riders not used to riding at this pace together

Elaine Pratts competition came to an end as she was pulled out of the race as they entered the third lap. The fall having cost her dearly as she fell back and had a long way to catching up with the main peloton who were now some distance ahead.

An injection of pace in the third lap by the Canadian team and then the Isle of Man and England’s Henderson fractured the peloton and started to have an effect on the main pack.
Although the main peloton seemed to continue working tactically and like an elastic band soon chased down the breakaways and closed distances.

With 40km to go and with the peloton steading it’s pace for a while as the heat and tiredness kicked in Olivia Lett maintained her pace keeping up with the main peloton in what was a great display by the Gibraltar rider.
As they entered the countryside roads there was a breakaway by riders from some of the top nations which split the pack.
The breakaway five threatened to keep their distance.
The breakaway impacted the rear as the chasing peloton started to split. The breakaway five were caught up by the main peloton but with a split of the same which now saw the rear end with a small gap opened up.
Olivia Lett did well to keep pace with the rear split group of the peloton which had lost ground with the main front group for a short while before they too were chased down.
With 28km to go the peloton having passed through the town centre roads was once again together as a pack with Olivia Lett still going strong within the pack and holding her own.
For Gibraltar viewers her presence in the main peloton meant that Gibraltar’s participation in the event was closely followed by live on BBC or via iplayer, a once in a lifetime chance to see a Gibraltar rider in a long distance competition.
Entering the country lanes with 23km to go a couple of breakaway attempts saw a further split which saw Olivia Lett once again fall back but sticking with the rear group as they chased the main peloton.
Having kept up with the main peloton it was in the last lap that Olivia Lett fell back a bit as the front runners started to push harder for what was to end as a sprint finish.
Gibraltar’s sole finisher Olivia Lett finished 42nd just five minutes 44 seconds behind the leaders in what was a gruelling 112km course.
Lett making Gibraltar history as the first finisher Gibraltar rider in womens cycling road racing Commonwealth Games competition in her debut at the games. 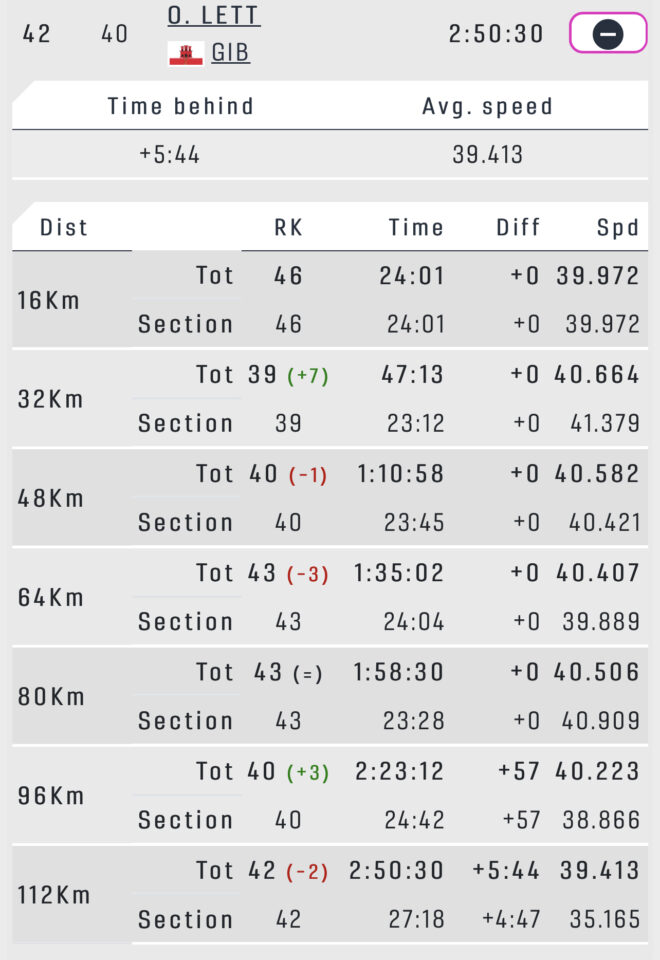