One of the RGP’s youngest Sergeants, Tanya McLeod

Meet Tanya McLeod who, at the age of 28, is one of the RGP’s youngest and brightest Sergeants.

The former Westside School pupil joined the force at the age of 19 in October 2011 — and hasn’t looked back since.
“I had done work experience at 14 with the RGP and I absolutely loved it,” she said.

“Joining the RGP was something I had always wanted to do. I wanted a career where I could do something different every day and be able to make a difference to people lives.”

But despite only having recently left college, Tanya still found the RGP’s Training School quite tough.

She explained: “We had Mr Lutkin training us and he was really on top of the discipline. I remember it was such a shock being expected to stand up for everyone who walked in and making sure our uniform was always perfect. If anyone hadn’t ironed anything or came in late, then we would all be punished collectively. So we would all have to come in early in the morning. But we got on really, really well as a group and built so many good friendships. I’m still really good friends with the people from my training school.” 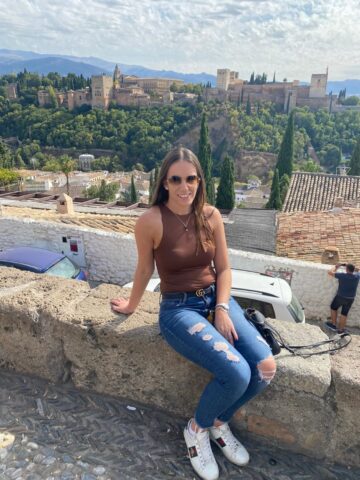 But don’t mention the word ‘marching’ to Tanya.

She said: “I really struggled with the marching side of it. I am the worst you have probably ever seen marching, so that was the thing I hated the most.”

After her Passing Out ceremony, Tanya went to Neighbourhood Policing for a year and a half before joining shift officers and becoming the patrol car driver.

“When you take on the role of the car driver, you are pretty much responding to everything that is going on,” she explained.

“Then I became an Acting Sergeant at 21, which was quite a senior role. I had people on my shift that were getting ready for retirement and they had been working for nearly 30 years, but I had a really good rapport with them and I never had any issues. They were really receptive, supportive and helpful. I never got a bad reaction from it.

"The first week or two of Acting I remember being quite nervous, as you are leading the shift and making the decisions on the ground. But I really enjoyed it and the variety of never knowing what job you are going to. I really enjoyed my time on shift.”

After a few years as a uniformed officer, Tanya joined the Safeguarding Team, whose role is to look after vulnerable children and adults.

She was then promoted to Sergeant at the age of 25 in November 2019.

She recalled: “It was a really proud moment. I was really proud of what I had achieved at quite a young age. It was one of those mixed emotions. I was really happy to get promoted, but I was also sad because I knew my time as a Detective in Safeguarding was going to be up and I was going to move on to a completely different role and leave behind the team that I’d worked with.”

Since her promotion, Tanya has gone on to work in the Designated Risk Management team (who monitor Gibraltar’s sex offenders) and has had attachments in Professional Standards (the anti-corruption unit) and Money Laundering.
She also holds a number of qualifications, which include being a Specialist Child Abuse Investigator.

And when asked what her favourite role has been in a career stretching back almost 10 years, she replied: “I would say my favourite role was as a Detective Constable in the Safeguarding team. It’s where you really make a difference. You are protecting the most vulnerable children, or adults, who can’t protect themselves. It can be very challenging and emotionally draining as you get very attached to the families that you work with. You have to dedicate a lot of time to them, compared to Drug Squad, where you don’t have any interaction with the victims, or in Financial Crime, where your victims are normally corporate companies.”

Tanya added that the camaraderie at work was another positive aspect of the job.

“Over time, a handful of my workmates have become some of my closest friends, in and out of work,” she added.
“In terms of friendships, my friends that I had before I joined the RGP are still my friends. I’ve never had a situation where I’ve had to arrest a friend.”

And as for the negatives?
She said: “You are on duty 24/7, particularly in Gibraltar, where it’s such a small community, if you go out you are always aware of what’s going on around you and the public know who you are. If you go out to eat or anything with friends, all eyes are on you. And if anything happens, they know you are an officer and you have to react.”
As for funny stories, Tanya said there have been quite a few over the years. But one that stuck in her mind happened on a Friday night, when following a big incident, most of the detectives from the Crime Division were called in.

She recalled: “It got to about 4am and I saw one of my workmates at her desk wearing her going out gear and covered in glitter — as she had to come straight to work. It was just a hilarious sight to see at that time in the morning.”

And when asked what it was like being a female officer in the RGP, she said: “Honestly, I have never felt that I am treated any differently to my male colleagues in any department that I’ve been in. I’ve only ever had positive experiences, I don’t think there’s any divide. I’ve done all the jobs my male colleagues have done, including violent ones. The only thing I would say is that if we are going to a fight, they tend to always go in beforehand, they’re not saying that I shouldn’t go in, or that I’m not good enough to go in, they are just looking after the females.”

Tanya was also asked her opinion on why there has still not been a female officer above the rank of Sergeant so far.

“I’d love to see a female become Inspector, and not only an Inspector, but further up the ranks,” she replied.
“But I am a firm believer that you get it on your merit, not because you are a female. I would personally never want to be promoted just because I am a female, I want to be promoted because I deserve the promotion. I hope it happens soon because it would be great to have one.”

As for her future, Tanya is the first to admit that she is focussed on wanting further promotions.

She said: “I’m still quite young, but in the future I’d like to make it to Chief Inspector, and if at all possible, above that. But certainly I’d like to go up a couple more ranks than where I am now.”

And when Tanya, who is currently a Sergeant on shift again, isn’t busy working, she does have time for a few hobbies.

She added: “I love travelling. Any time I can get away I take that opportunity, even if it’s only a short break. I’ve been getting withdrawal symptoms from not being able to travel during the Covid lockdown.

“My favourite place I’ve been to, hands down, is Dubai. I just love everything about it, the atmosphere, all the activities there are to do there and the people are really friendly. I love being in cities and places that are modern, and Dubai is all that. If we are talking short weekend breaks, then Granada is another one of my favourite places.

“I also really enjoy cooking and baking when I have the time. Everyone’s favourite thing that I make is cheesecake, but don’t tell everyone that or they’ll all want me to make them one.”