The discrete meeting, described by Spain as informal and held away from the Spanish minister’s programme during her first official visit to the Campo de Gibraltar, was the first time the two had met face-to-face to discuss the complex issues arising from the Rock’s departure from the EU alongside the UK.

It is also the first time a Spanish Foreign Minister has met bilaterally with a Chief Minister of the Government of Gibraltar.

Earlier in the visit, Mrs González Laya had said the UK was “my interlocutor” in the negotiations about the Rock’s future relations with its nearest neighbour, reflecting the fact that Gibraltar’s membership of the EU is through the UK, and it is the UK that is leaving the bloc.

But on Thursday, it was Mr Picardo and Mrs González Laya who were sat across the table from each other in a one-to-one meeting held in the Spanish government representative's office in Algeciras, away from the media glare.

It came as the UK and the European Union aired mixed messages over the likelihood of a post-Brexit trade deal following the conclusion of their latest London-round of talks.

The European Union’s chief negotiator Michel Barnier said a deal looked “unlikely” and that the two sides remained at a stalemate.

As they spoke in London, Mrs González Laya in Algeciras was positive about negotiations in respect of future relations with Gibraltar, but less so about the progress of the wider UK/EU agreement.

And she was clear about the implications of a ‘no deal’ Brexit at the end of the transition period on December 31.

“It will be lose-lose,” she told the Chronicle during a press conference.

The 40-minute meeting with the Chief Minister was revealed by Mrs González Laya herself, who tweeted a photo with a brief message.

“During my visit to the #Campo de Gibraltar #Algeciras I met with @FabianPicardo [and] we spoke about progress in the implementation of the Memorandums of Understanding on the environment, citizens, police/customs cooperation, tobacco and tax and about a future of shared prosperity,” she wrote.

Mr Picardo also replied on Twitter and wrote: “Delighted to meet @AranchaGlezLaya during her visit to the #CampodeGibraltar. We reviewed the excellent work of the committees established under the Memorandums of Understanding fo the Withdrawal Agreement and discussed turning #Brexit into a rainbow of opportunities of prosperity for all.”

Later in a statement issued by No.6 Convent Place, Mr Picardo underscored the urgency of the discussions, given that the transition period agreed under the Withdrawal Agreement expires on December 31.

“We have recorded our deep satisfaction with the progress that has been achieved by the committees established under the MoUs,” he said.

“They have addressed important practical issues and created a climate of confidence between us.”

“The second round of meetings takes place in Gibraltar next week.”

“We have also talked about the many opportunities that Gibraltar and the Campo de Gibraltar can seize from the challenges that Brexit presents to all of us.”

“We agreed that working together we can turn this into a rainbow of opportunities which can turn this region into an arc of prosperity for all of the people who live in and around it.”

“There is a lot of work to do. There is not much time to do it.”

“I have committed my government, my team and myself to provide all of our ability, capacity and enthusiasm in the determination to finalise ambitious arrangements that can deliver the future area of shared prosperity which we all want to see.”

“We want a win-win and together we can deliver it.” 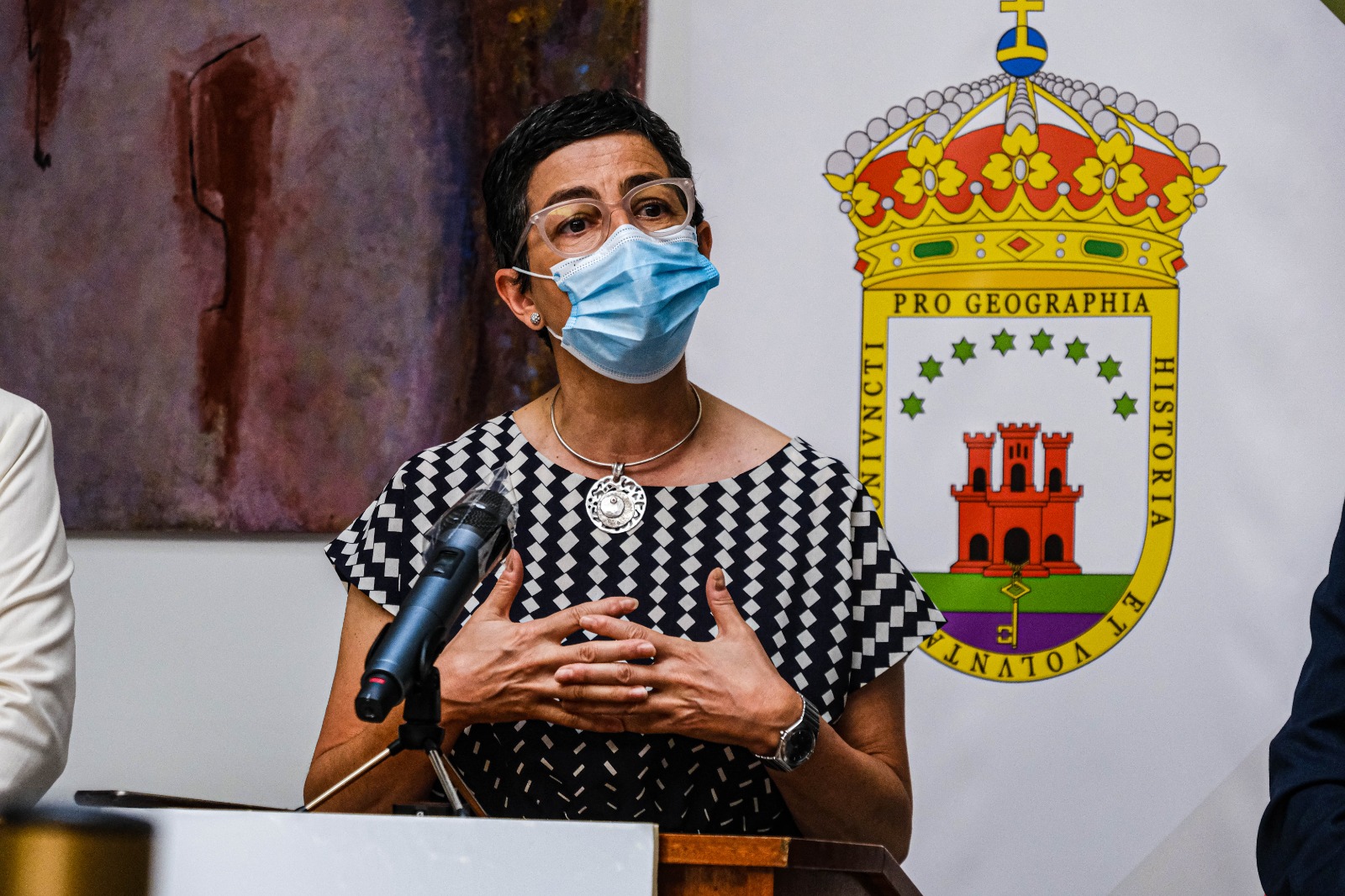 The Spanish minister’s talks with the Chief Minister were the final meeting in a packed programme over two days during which she visited La Linea and the border and held talks with the Campo’s mayors to hear their views on Brexit and the challenges it poses for communities on both sides of the border.

“I want to listen, understand and see with my own eyes so that we are in a better position in the negotiations with the United Kingdom and the relations with Gibraltar,” she said on Wednesday.

On Thursday morning, Mrs González Laya visited the Port of Algeciras, Spain’s busiest port, before holding a two-hour session with the Campo mayors in the headquarters of the Mancomunidad de Municipios, which brings together all the Campo’s municipalities.

She promised a boost to investment in the region and said Spain would earmark EU funds for projects aimed at promoting business and trade in a region plagued by high unemployment.

But while the minister’s visit was focused on learning about the Campo's concerns at first hand and delivering a message of reassurance from Madrid, it was her comments on Brexit that will resonate most both in Gibraltar and in London.

She sent the message in English in response to questions from the Chronicle and GBC during a press conference in the Mancomunidad ahead of her bilateral meeting with Mr Picardo, which at that point was known only to officials from the Spanish, Gibraltar and UK governments.

Using the same language employed later by the Chief Minister, Mrs González Laya set out her government’s hopes to to create “an area of shared prosperity” with Gibraltar.

“We do not see a negotiation with the UK in respect of Gibraltar as being a zero sum game,” she said.

“We see this as having the potential to be a win-win negotiation with a win-win result.”

“That is how we approach this negotiation. But of course it takes two to tango.”

“I can share only our approach because in an interdependent world, a negotiation has to be always that you win, but the other side also wins.”

The wider backdrop to the Spanish minister’s comments are the fraught negotiations between the UK and the EU for a future relationship.

As she was speaking in Algeciras, Britain and the EU clashed on Thursday over the chances of securing a free trade agreement, with Brussels deeming it "unlikely" but London holding out hope one could be reached in September.

Since Britain left the bloc in January, talks on the trade agreement and other future ties have all but stalled, with each side accusing the other of failing to compromise before a transition period runs out at the end of this year.

Those accusations grew louder after the latest round this week, with the EU's negotiator Michel Barnier saying London had shown no willingness to break the deadlock and his British counterpart David Frost describing the bloc's proposals as failing to meet the government's demand to be treated as an independent country.

But both sides agreed on one thing: there had been no movement on the main stumbling blocks to a deal on fair competition guarantees - the so-called level playing field - or on fisheries.

Without a deal to govern future trade flows, some companies fear costly disruption and confusion at the border from next year, which would hit at a time when many are already struggling with the impact of the coronavirus crisis.

"By its current refusal to commit to conditions of open and fair competition and to a balanced agreement on fisheries, the UK makes a trade agreement - at this point - unlikely," Mr Barnier told a news conference after the face to face talks in London.

"The time for answers is quickly running out," he said. "If we do not reach an agreement on our future partnership, there will be more friction."

Pressed on this point by the Chronicle, Mrs González Laya would not be drawn on whether a deal in respect of Gibraltar was possible if there was no wider EU/UK agreement.

But she left no doubt that Spain believes a hard Brexit will be bad for all.

“And what happens if the UK leaves without a negotiation with Spain in the aspects relating to Gibraltar?"

“So this is why I do not think that the most prudent approach today will be to bet on a no deal future between the EU and the UK."

“I think the most intelligent thing to do in world that is going through incredible fragility and through incredible vulnerabilities as a result of this Covid crisis, the most intelligent thing to do today would be to negotiate, to agree a future relationship, to give it a framework and to make sure that we respond to the aspirations of our respective citizens.”

EDITOR'S NOTE: This article has been corrected to reflect the location of the meeting in Algeciras, which had originally been described as the Spanish Ministry of Employment's office in that city.

GHA Board to host public meeting