This feature prepared by the Royal Gibraltar Police focuses on the work of police dog Ness and is written from a dog's point of view.

‘Hi everyone, I’m Police Dog Ness, you’ve probably seen me around. I’m the good-looking German Shepherd that usually has PC Janssen Olivero on the other end of his lead. I’ll tell you more about him later.

‘Just so that you can get to know me a bit better, I am 6 years old and I grew up in Sheffield as part of the South Yorkshire Police puppy-breeding programme, one of the best training schools in the UK.

‘It was at Sheffield that I first met Janssen who was there specially to train with me – and we are still working together six years later. It just shows how well I trained him! 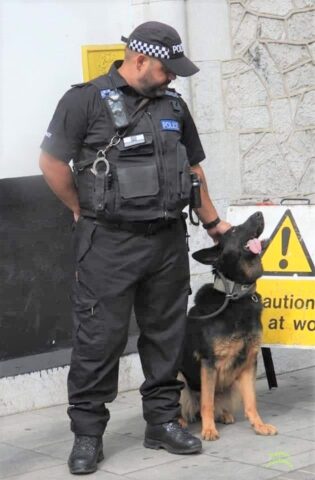 ‘And I have a longer title than Janssen so I’m probably more important. Officially I am a General Purpose Police Dog and I am trained and licensed to carry out three main tasks:

Detection Work – which means I can track, search houses and buildings and even open spaces for bad people, missing people and even special objects of interest. 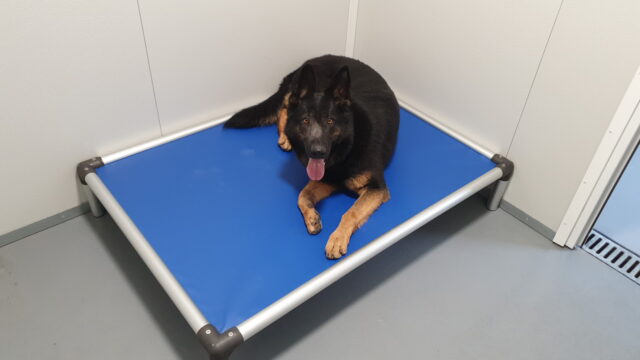 Public Protection and High Visibility Patrolling.
Stop and Detain by biting. I am trained not to release the target person until I am commanded to do so but, when I’m around, everyone tends to behave themselves so, in my entire career, I have never needed to bite anyone for real.

‘Every year I need to pass an exam to show that I can still carry out each of these roles. I’ll probably retire when I am 7 or 8 because it’s RGP policy that I should have a long and happy retirement at the end of my working life.

‘I’ve had quite a few success stories in my career. I remember a couple of years ago that a bad man had used a screwdriver as a weapon during a fight in the Upper Town. The screwdriver was a vital piece of evidence but no-one could find where it had been
hidden. Then they remembered that I had a good nose for finding things and, within a few minutes, I had found the screwdriver hidden underneath a pile of builders’ rubble. I also remember making Janssen really happy one night whilst we were taking a walk by the beach. Janssen didn’t know it but I could smell loads of people hiding in the dark nearby ..... I remember barking so loudly at them that they all came out from where they were hiding and ran away, some of them even jumped into the water, which looked really cold. 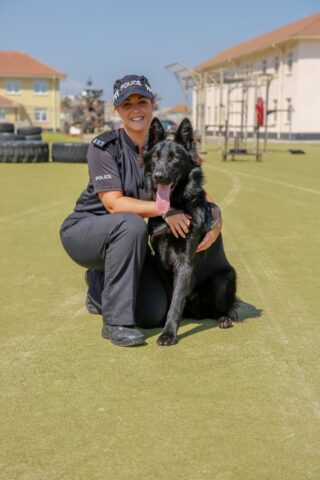 ‘You may have seen that I now have a new friend in the kennels. Young Police Dog Stitch is being trained to be a Drug Detection dog but, of course, I have lots of good experience which I can pass on to him. Janssen says that I am an excellent role model for Stitch.

‘The big news from Stitch and me is that we are soon to move into some excellent new kennels up near the frontier. These new kennels are so brilliant that they must have been designed by a dog. They have proper beds, baths, grooming areas, exercise runs, vet areas – all designed to give us lots of shade when the sun is out. Nothing has been forgotten. They really are 5 Star luxury and we can’t wait to move in.

‘I think it’s now time for me to introduce you to my man handler, PC Janssen Olivero. He has been a police officer for 24 years and he carried out several types of work before he successfully applied to join the Dog Section about 8 years ago. Janssen and I work really hard together to be the best team we can be so that we can help to keep Gibraltar safe. When I’m not working, I love to play ‘Fetch’ with Janssen. He throws the ball out for me to chase and I always bring it back to him so he can throw it out some more. Janssen must really like playing this game. When he finishes work he then goes off to teach the Gibraltar Women’s Football Team to play with a ball, but they all run after the same one instead of each having their own ball! And, instead of picking it up, they kick the ball around and run after it again .....crazy humans! 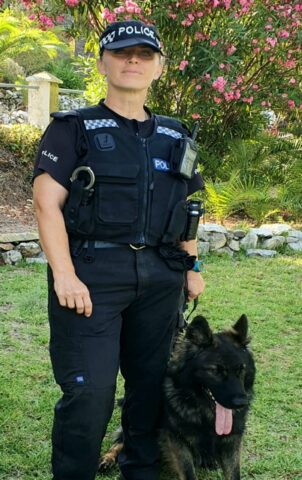 Janssen says, ‘I really love working with the dogs. It is very rewarding work because dogs do not tell any lies. You get out of the dogs exactly what you put into the job’.

Police Dog Ness is keen to include a mention for the other officers in the Dog Section, PC Emma Rowbottom and PC Radka Almeida. ‘They help with our training and our exercise,’ says Ness. ‘They also feed us and generally take care of us, especially when Janssen isn’t around.

‘Stitch and I are getting on really well and it would be good if we could get some more new dogs to join us. Hopefully, Emma and Radka can soon have their own General Purpose Police Dogs and I reckon we could always use another Drug Detection dog to help young Stitch. It would be great to have two new friends to play with and I might even ask for early retirement.... they say Florida is nice this time of year.’ 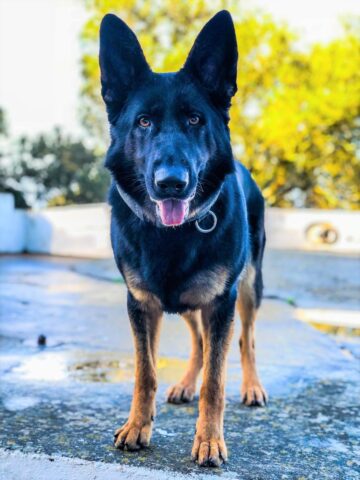 So next time you see Police Dog Ness, do say ‘Hello’ but remember that when she is out in the street, she is always working. She might be Tracking, Patrolling or preparing to Stop and Detain. Oh yes, and please say ‘Hello’ to her man handler, too. 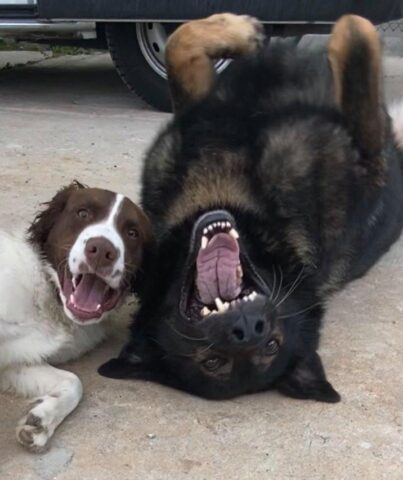