Prime Minister Johnson promises Brexit with 'no ifs or buts'

By William James and Kylie MacLellan

Boris Johnson took office as British Prime Minister on Wednesday, vowing to implement the result of the 2016 Brexit referendum and lead Britain out of the European Union on October 31 with "no ifs or buts".
Mr Johnson enters Downing Street at one of the most perilous junctures in post-World War Two British history - the United Kingdom is divided over its divorce from the EU and weakened by the three-year political crisis that has gripped it since that referendum.
One of Britain's most prominent Brexit campaigners, Mr Johnson has repeatedly pledged to leave the EU by October 31 - "do or die" - and to inject a new optimism and energy into the divorce, which he argues will bring a host of opportunities.
But his strategy sets the United Kingdom up for a showdown with the EU and thrusts it towards a potential constitutional crisis, or an election, at home.
"The people who bet against Britain are going to lose their shirts because we are going to restore trust in our democracy, and we are going to fulfil the repeated promises of parliament to the people and come out of the EU on October 31, no ifs or buts," Mr Johnson, 55, said after arriving at his new residence, No.10 Downing Street.
One of the issues that prevented his predecessor Theresa May getting a divorce deal through parliament was the Irish "backstop" - a provision that would maintain a customs union with the EU if no better solution was found.
Mr Johnson was bullish, however. "Never mind the backstop. The buck stops here," he said, watched by his girlfriend, Carrie Symonds, and his staff.
He said he would ensure "the people" were his bosses, and that he would accelerate preparations for a "no-deal" Brexit - the threat he intends to use to force a reluctant EU to renegotiate the exit deal it agreed with Mrs May.
To implement Brexit, Mr Johnson will appoint Dominic Cummings, the campaign director of the official Brexit Vote Leave campaign, as a senior adviser in Downing Street.
Wednesday's events combined arcane British political choreography with the realpolitik of appointing a new government - likely to be heavy on Brexit supporters.
Theresa May left Downing Street after a three-year premiership that was marred by crises over Brexit. She formally tendered her resignation to Queen Elizabeth.
Mrs May appeared to be fighting back tears as she was applauded out of the House of Commons chamber. Her Chancellor, Philip Hammond, resigned.
Mr Johnson had a possible foretaste of turmoil ahead when, as he drove to his audience with the queen, Greenpeace protesters tried - but failed - to block the path of his car as his chauffeur drove around them.
The queen requested he form an administration. His formal title is now "Prime Minister and First Lord of the Treasury".
His first task was to appoint key members of the government - names that will give a hint of how he will handle Brexit, Britain's most significant decision in decades. 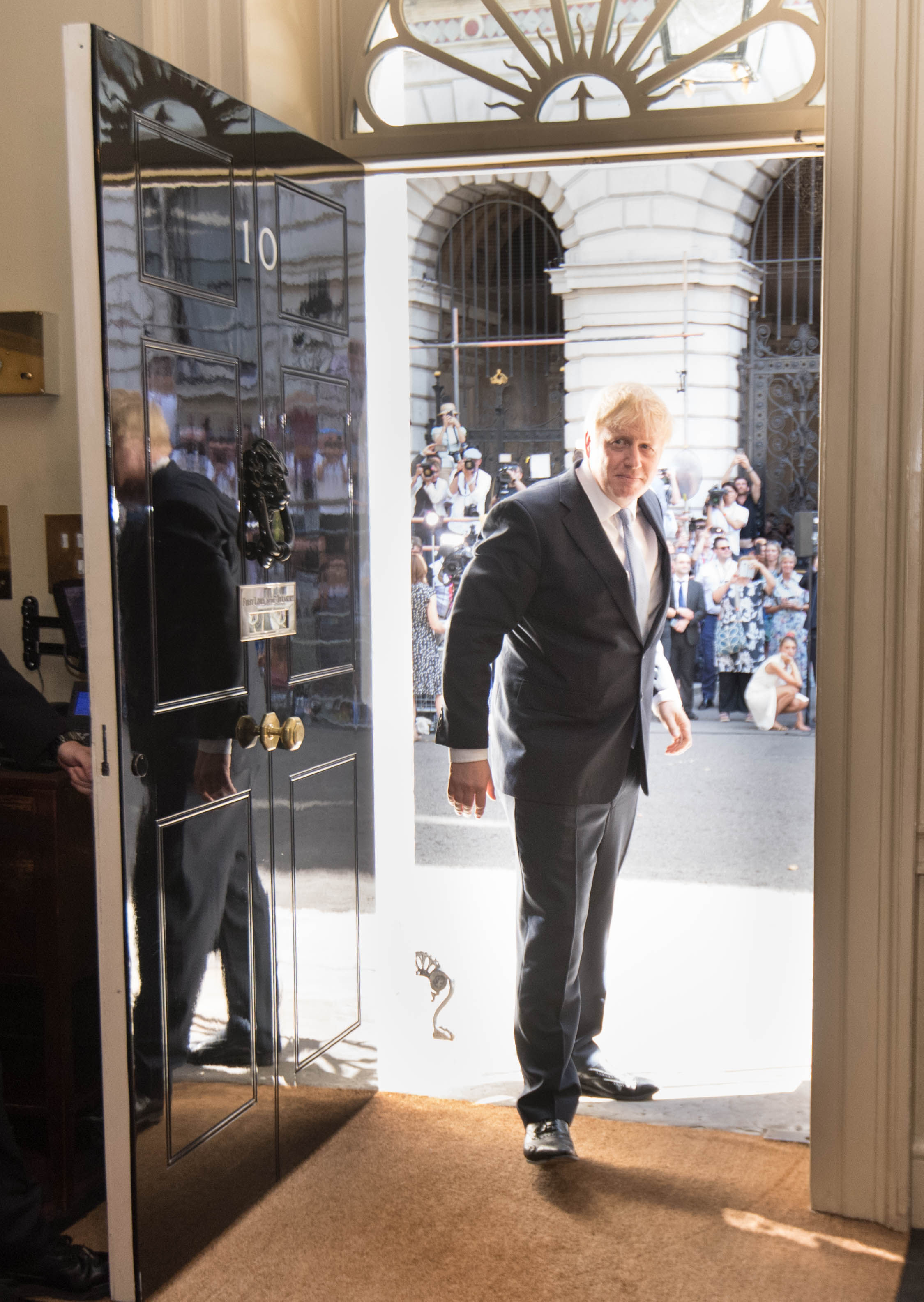 BREXIT GOVERNMENT?
But 'Prime Minister Johnson' - a man known for his ambition, blond hair, flowery oratory and cursory command of detail - must solve a series of riddles if he is to succeed where Mrs May failed.
The 2016 Brexit referendum showed a United Kingdom divided about much more than the EU, and has fuelled soul-searching about everything from secession and immigration to capitalism, the legacy of empire and modern Britishness.
The pound is weak, the economy at risk of recession, allies are in despair at the Brexit crisis and foes are testing Britain's vulnerability.
Mr Johnson's Conservatives have no majority in parliament and so can only govern with the support of 10 lawmakers from the Brexit-backing Democratic Unionist Party in Northern Ireland.
While Mr Johnson has said he does not want an early election, some lawmakers have vowed to thwart any attempt to leave the EU without a divorce deal. Brexit Party leader Nigel Farage said he was open to an electoral pact with Mr Johnson.
The appointment of Mr Cummings, known for his campaign skills but also for a combative style that challenges the consensus, indicates Mr Johnson is serious about going in hard on Brexit and wants a first-class political campaigner close.
Mr Cummings, who graduated with a top degree from Oxford, says Britain's political system is broken and Brexit negotiations have been botched by officials and politicians who have thwarted the will of the people.
Interior minister Sajid Javid is widely tipped to stay in a top job - possibly as finance minister - and was spotted flanking Mr Johnson as he arrived to meet MPs.
There is talk that Mr Johnson will appoint career diplomat David Frost as adviser on Europe.
A record number of ethnic minority politicians are expected to serve as ministers including Priti Patel, the former aid minister who resigned in 2017 over undisclosed meetings with Israeli officials, and current employment minister Alok Sharma.
Foreign Secretary Jeremy Hunt, Mr Johnson's rival for the leadership, was offered the job of defence minister but turned it down, Sky News TV reported.
NO DEAL?
Mr Johnson has pledged to negotiate a new Brexit deal with the EU before October 31 but if the bloc refuses, he has promised to leave that day without a deal.
Many investors say that would send shock waves through the world economy and tip the world's fifth largest economic power into recession or even chaos.
Brexit without a divorce deal would roil financial markets and potentially weaken London’s position as the pre-eminent international financial centre.
Brexit supporters say those fears are overblown and the United Kingdom will thrive if cut loose from the European project, which they cast as a German-dominated bloc that is falling far behind its global competitors such as the United States and China.
"If he really wants a 'no-deal', he will get it. We will never push an EU member out, but we can’t stop him," one EU diplomat said.
"More likely, his own parliament would."