Queen Elizabeth II during the Remembrance Sunday service at the Cenotaph, in Whitehall, London. Photo by Aaron Chown/PA Wire

The Queen has led the nation in marking Remembrance Sunday, as people around the UK privately paid their respects at home due to the coronavirus pandemic.

The 94-year-old monarch was joined by family members and the Prime Minister in commemorating the nation’s war dead at the scaled-back service at the Cenotaph in London.

The Prince of Wales, Duke of Cambridge, Princess Royal and Earl of Wessex laid wreaths at the ceremony, which was held outdoors with guests required to observe social distancing.

The public were unable to attend this year, with the event taking place during a second national lockdown in England, and were instead encouraged to take part in the two-minute silence at 11am at home.

In other years, Whitehall is usually packed with thousands of veterans and military, but on Sunday less than 30 veterans were in attendance.

The Queen, dressed in a black hat and coat, looked on from a balcony at the Foreign, Commonwealth and Development Office building, as Charles laid a wreath on her behalf.

The Duchess of Cambridge and Duchess of Cornwall looked on from a separate balcony, while the Countess of Wessex and Vice Admiral Sir Tim Laurence were on a third balcony.

The Duke of York did not take part in the event, having stepped down from official royal duties following fierce criticism after his Panorama interview about his friendship with sex offender Jeffrey Epstein.

The Duke of Sussex, who stepped down as a working member of the royal family and now lives in California, was not at the ceremony but spoke about what serving his country means to him. 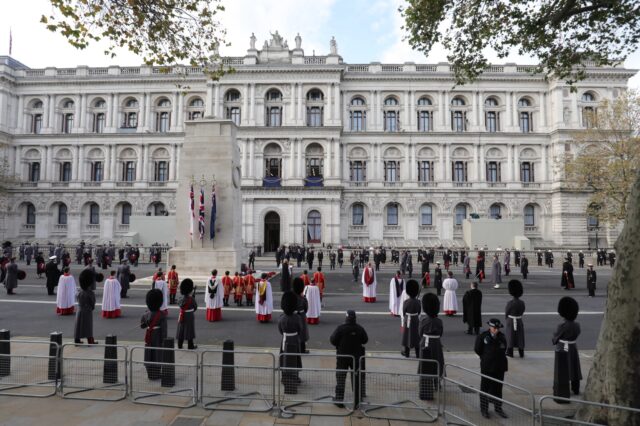 The Remembrance Sunday service at the Cenotaph, in Whitehall, London.
Photo by Aaron Chown/PA Wire

In a podcast to mark Remembrance Sunday, Harry, who spent 10 years in the armed forces, said: “Being able to wear my uniform, being able to stand up in service of one’s country, these are amongst the greatest honours there are in life.

“To me, the uniform is a symbol of something much bigger, it’s symbolic of our commitment to protecting our country, as well as protecting our values.

“These values are put in action through service, and service is what happens in the quiet and in the chaos.”

General Sir Nick Carter, Chief of the Defence Staff, said some veterans might find Remembrance Sunday a lonely experience this year due to the Covid-19 restrictions in place.

Sir Nick told the BBC One’s Andrew Marr Show the guidelines would be “particularly tough on our veterans”, adding: “They traditionally have had the opportunity to get together and talk about their memories and their reflections, but equally to strut their stuff.”

Vice-Marshal Chris Elliot, controller of the RAF Benevolent Fund, said: “Services across the UK will sadly look and feel very different this year but what’s important is the significance of Remembrance Sunday has not changed.

“Today remains a poignant reminder to reflect on the bravery and sacrifice of all those who served.

“The tenacity and comradery of previous generations in their struggles should serve as an inspiration to us all as we deal with new challenges Covid-19 presents.

“It should also remind us of the great debt we owe to our veterans, to keep their memories alive.”

There were scaled back events in Gibraltar too, with numbers restricted as a result of Covid-19 restrictions. 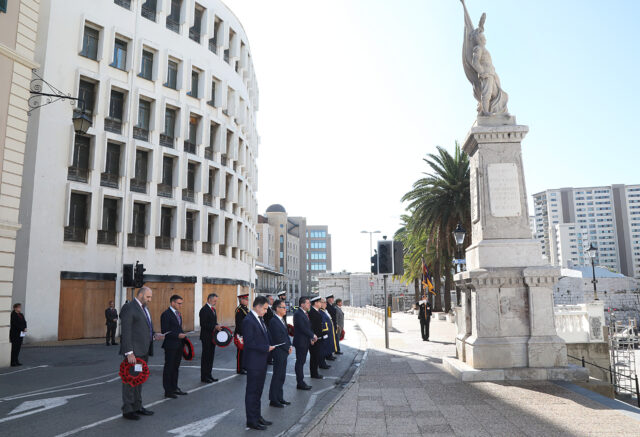 Bars and restaurants reopen for first time this year