The Governor, Vice Admiral Sir David Steel, watched by the Dean of Gibraltar, Reverend Canon Ian Tarrant, addresses the congregation during a remembrance service for Queen Elizabeth II in the Cathedral of the Holy Trinity on Thursday. Photos by Johnny Bugeja

Queen Elizabeth II’s life, sense of duty and service were honoured on Thursday during an Anglican Service of Remembrance in the Holy Trinity Cathedral.

The well-attended service saw churchgoers pay their respects to the Queen, a week after her death and just days before her state funeral.

For 70 years as reigning monarch, she was the head of the Church of England.

The Governor of Gibraltar, Vice Admiral Sir David Steel, Chief Minister Fabian Picardo, his wife Justine, and Deputy Chief Minister Dr Joseph Garcia, Leader of the Opposition Keith Azopardi, Leader of Together Gibraltar Marlene Hassan Nahon, Speaker of the House Melvin Farrell, and Mayor of Gibraltar Christian Santos, were amongst the local dignitaries who attended the service alongside senior representatives of other churches in the Christian faith. 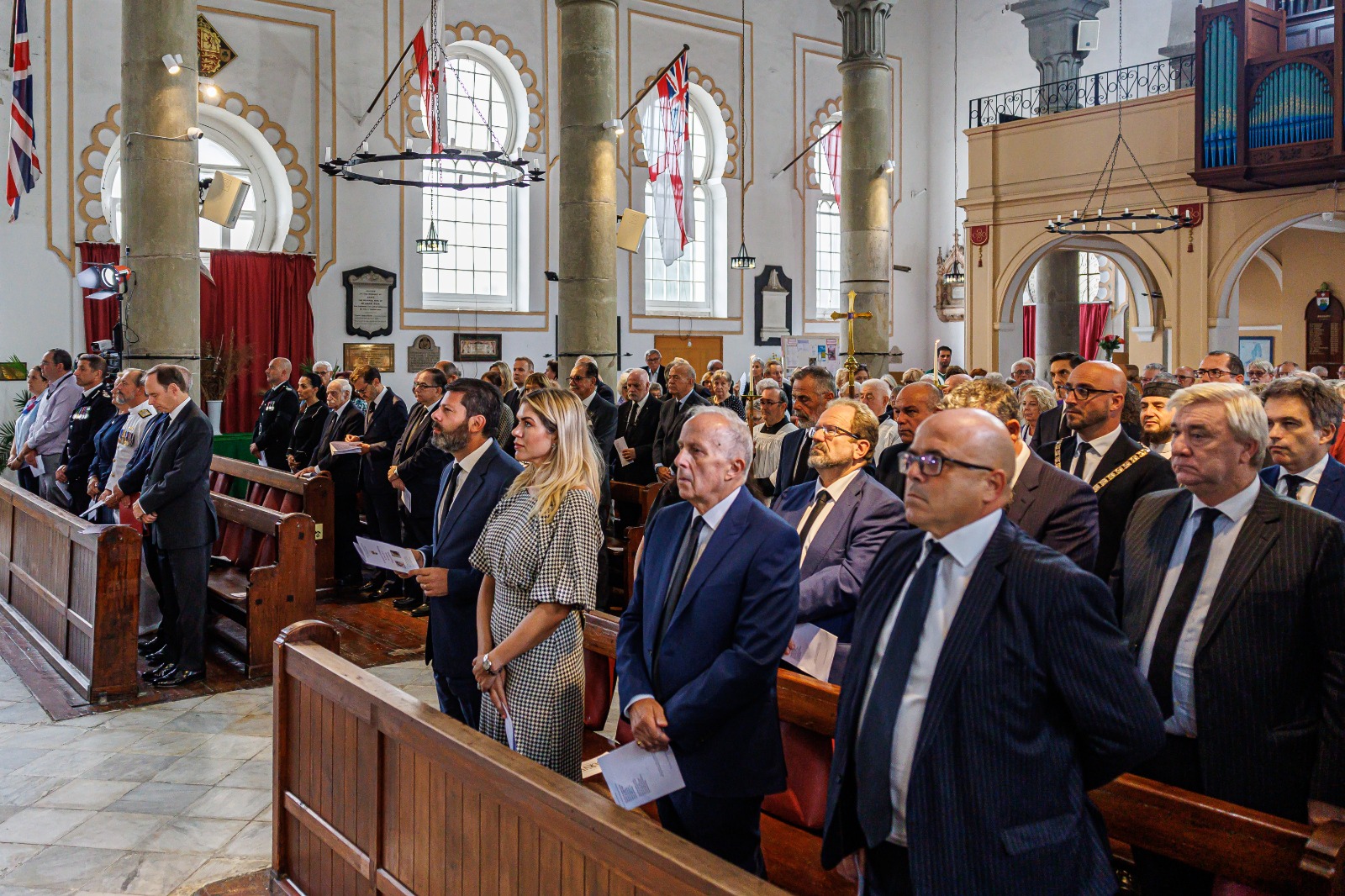 The Dean of Gibraltar, Reverend Canon Ian Tarrant, spoke of the monarchy in religious texts, adding a king governs under the authority of God and how leadership is service.

At 21 years old, the Queen had said in a speech that her “whole life, whether it be long or short, shall be devoted to your service”. An audio recording of her words were played during the service.

Rev Tarrant described how the young Queen dedicated herself to service and carried her vow with “unsurpassed devotion” for so many years.

“Her life was very long but she fulfilled that vow in every possible way, right up to the time that she was called to be with the God she worshipped constantly throughout her life,” Sir David said, addressing the congregation.

“So much has been said about Queen Elizabeth over recent days that it would be impertinent of me to try to embellish the words of others with insignificant personal anecdotes.”

“Her life has meant so much to so many people in so many ways, and she has given us so many gifts - perhaps one of the most important being her example, and how we might possibly live our own lives, trying our best to emulate hers.”

He described her as “dignified but relaxed...regal but never out of touch” and, above all, “human”.

She was “serious but not too serious”, and known for her warm words.

He recalled lighter moments in the Queen’s life too, such as her acting alongside James Bond actor Daniel Craig for the London Olympics in 2012, or her Platinum Jubilee video with Paddington Bear.

“She only had the chance to visit Gibraltar once, in 1954,” Sir David said. 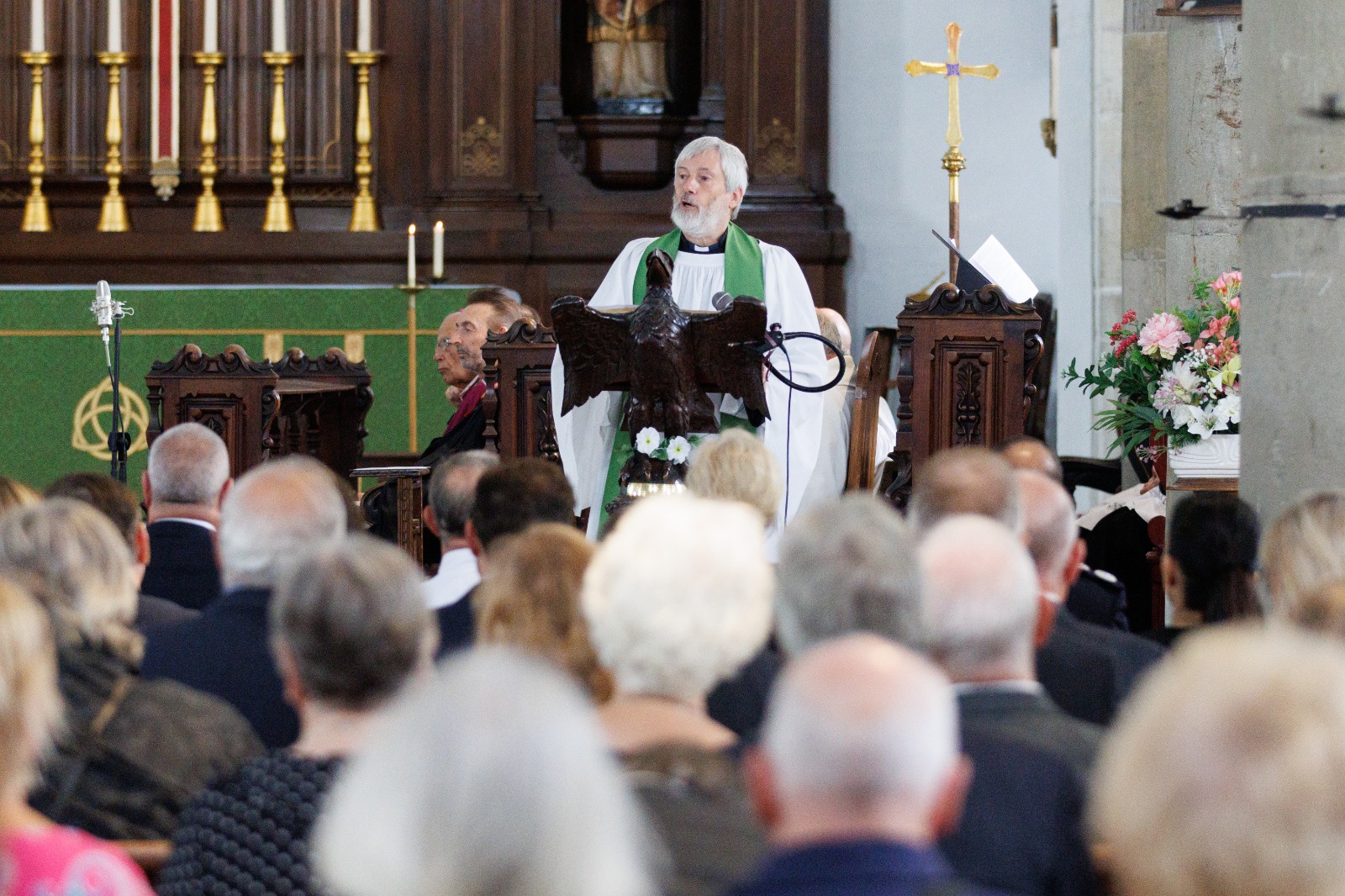 “But when Gibraltar came to Her home in Windsor Castle in March of this year, in the form of Her Royal Gibraltar Regiment, She made sure that She was at home to receive Gibraltar, and to look out of a window to watch Her youngest son, The Earl of Wessex present Her colours to Her Regiment and Her Gibraltar.”

“In the last year of her long life, She could have granted Gibraltar no greater honour.”

“The last few days have been incredibly sad and difficult for us all but how fortunate we have been to live during the reign of Queen Elizabeth II.”

“We must rejoice in that knowledge, but also in knowing that her passion for and commitment to her subjects is shared by her beloved son King Charles III. Our Queen is at eternal peace. God save, and long live the King.”

Mr Picardo also delivered a speech during the service, describing Gibraltar as “her Rock” and the Queen being ours.

“I have no doubt that Queen Elizabeth The Second was the modern embodiment of Britannia in many a mind’s eye,” Mr Picardo said.

“Even the embodiment of ‘Cool Britannia’ in Her stints with 007 and that funny Peruvian bear who popped into Buckingham Palace and stole Her marmalade sandwiches.”

“And in Her official duties we never heard Her give us an opinion. She did not need to. She spoke through the leadership of Her example.”

“I think that to understand who we have lost we must nonetheless also go behind the Crown and the sovereign.”

He described how “the people of the Rock will forever mourn” the Queen’s passing. 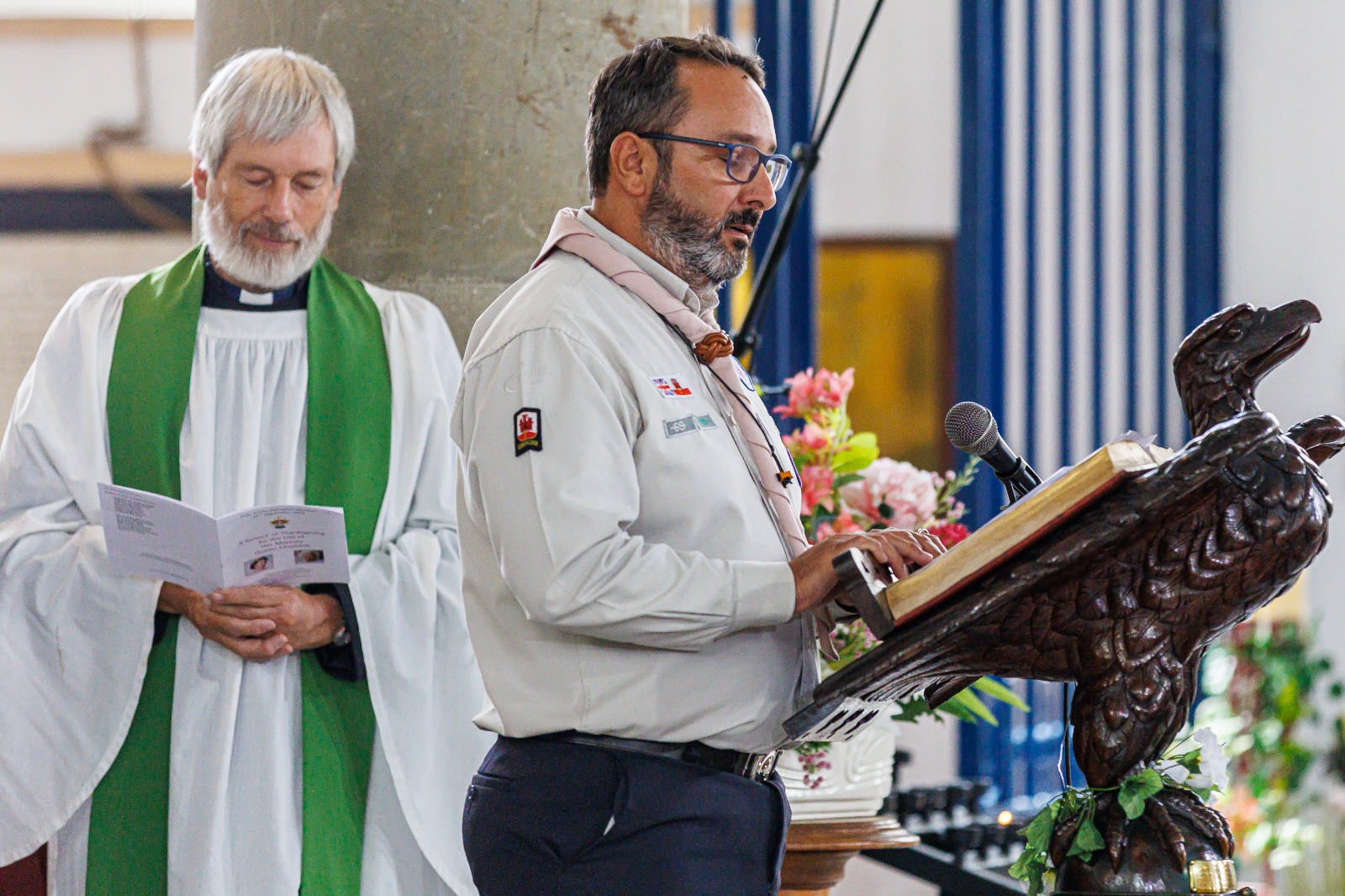 Scout Chief Commissioner, Mark Rodriguez, said the Scouts were united in sorrow over the loss of their Patron the Queen.

“We remember her and give thanks for her kindness and the unwavering support she showed our movement over many decades,” Mr Rodriguez said.

“For 70 years Her Majesty the Queen has stood at our side, encouraging our volunteers and our young people to learn skills for life, help others, and create a better world.”

“She was truly a friend to Scouts everywhere.”

“It will take time for our moment to recover from this loss, but we owe it to her to pick ourselves up and to carry her legacy of hope and promise forward for future generations.”

Mr Rodriguez added “no better” role model could have been found for the Scouts. 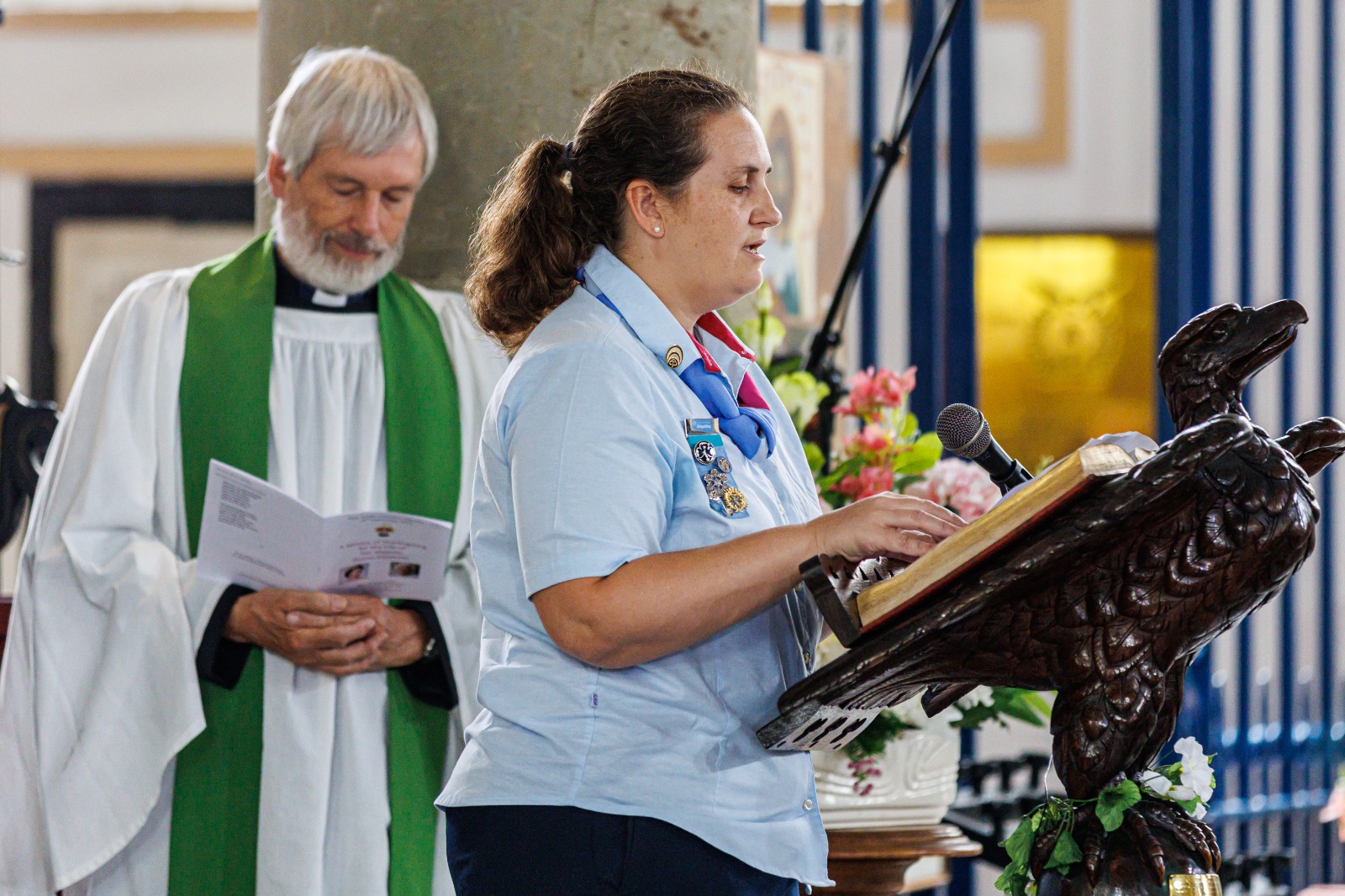 Mrs Montado said as a young girl the Queen would’ve completed tasks to receive her badges.

“Locally her impact has been unparalleled, the pride of the Associations involvement in her 1954 visit to the Rock lives on in the collective memory as part of our history,” Mrs Montado said.

“Throughout her life the Queen embodied the spirit of Guiding and the values that we live through the promise that all rainbow, brownies, rangers and their leaders make.”

“The promise is central to the Girlguiding ethos. We promise to do our best, to serve our community and our Queen, now King, to be true to ourselves, know our beliefs and help other people.”

“The Queen embodied these principles through the exceptional life that she led.”

“Girlguiding is honoured that the Queen was part of our organisation and is now part of our rich legacy and heritage that will continue to inspire young people to be the best they can be.” 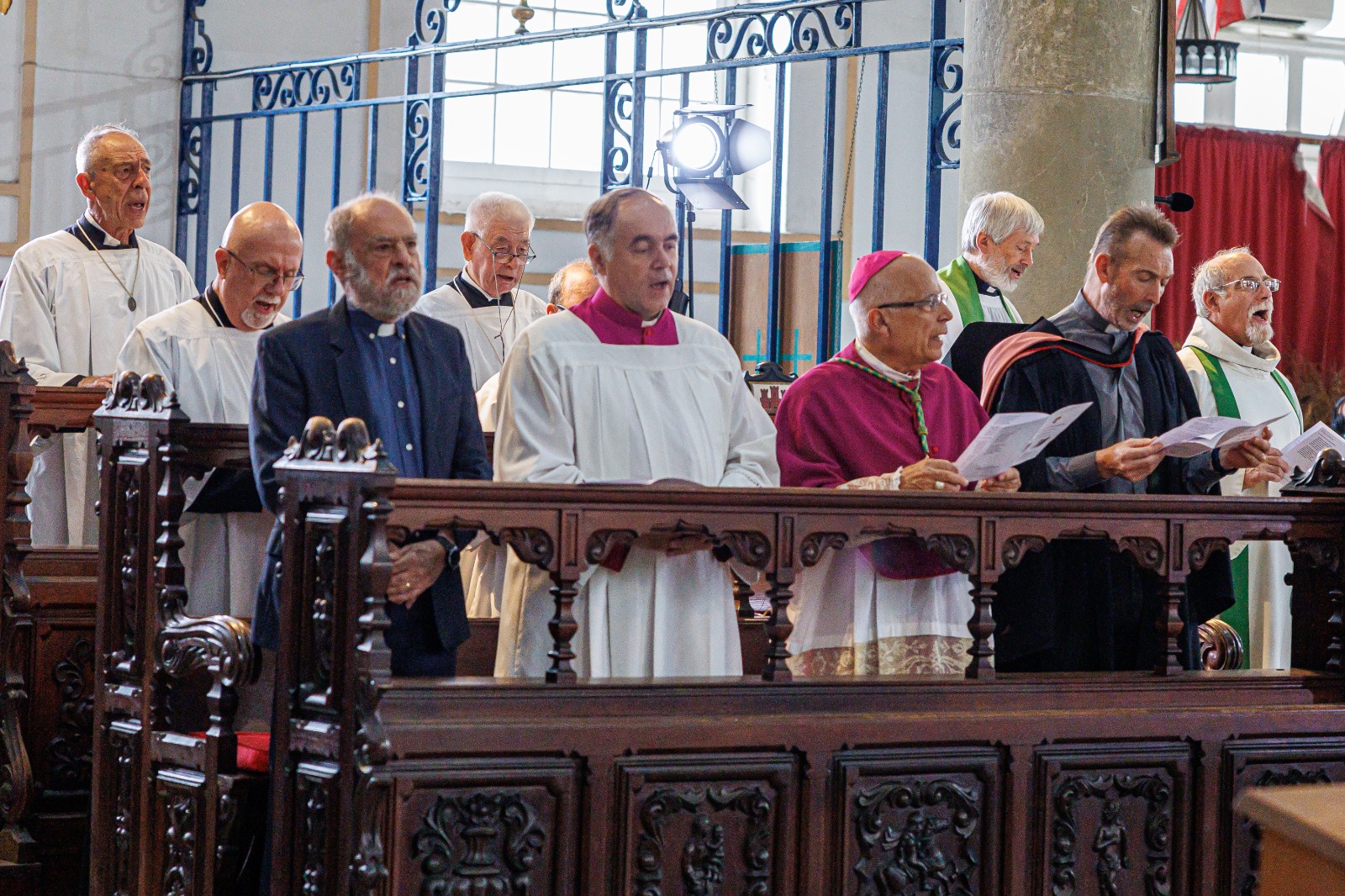 On behalf of the Order of St John, Richard Labrador, remembered he met the Queen in St Paul’s Cathedral and of his time as a Queen’s Scout.

“I just couldn’t believe it when I was stood in front of her chatting to her,” Mr Labrador said.

He added the Queen was the Sovereign head of the Order of St John and since 1952 had approved every recipient to the Order.

The Bishop of Gibraltar, Carmel Zammit, and Reverend Fidel Patron of the Methodist Church, both also gave a reading during the service.