Members of GHITA held a rally outside No.6 Convent Place yesterday where the Chief Minister, Fabian Picardo, met them and learnt of their concerns via a British Sign Language (BSL) interpreter.

One of the main issues discussed was the fact that for many people, BSL is their primary language.

Subtitles on TV screens, for example, were not the answer in ensuring inclusivity, because for them, English was a second language.

Speaking after the Chief Minister returned to his office, the Chair of GHITA, Edgar Triay, said Mr Picardo had been very approachable.

“You could tell that he has been listening carefully,” he said.

“He asked very good questions and he showed some misunderstanding on what is the difference between BSL and Makaton, as he thought sign language was being taught in schools via Makaton.”

Makaton is a teaching tool for teachers to teach English to children with a learning difficulty or who are non-verbal. It is a visual aid.

“It is a tool but the signs in that tool are limited, there are about 100 or so,” Mr Triay said.

“But in sign language, it has its own grammar and thousands of different signs, to the extent that there are actual colloquial differences.”

“There might be a dialect in the South of England that is different to the North of England and that gives it character because the signers can tell where that person comes from, like an accent does.”

Firstly, to remind Gibraltar that whenever they see campaigns in the UK for various types of BSL help, that the Rock is no different.

“We have a small community here of BSL users who want the same and not to be different,” said Mr Triay.

The second reason is to show people in the UK that Gibraltar and Great Britain are joined by BSL as well as their nationality.

“At the moment the Disability Act recognised that BSL should be used for someone who is deaf and is recommended to communicate with that someone, be it via an organisation or department within Government,” said Mr Triay.

“But, there is no law saying that it has to be BSL for Gibraltar, but that is the language that is being used in Gibraltar.”

“And, there is no obligation for the Government or Government organisations in every official communique to have that same information available in sign language in real time.”

“There is no point for Government to give an important communique in full for the hearing and then and for the not hearing to read about it three or four hours later.”

“In a language which is not their first language,” he added. 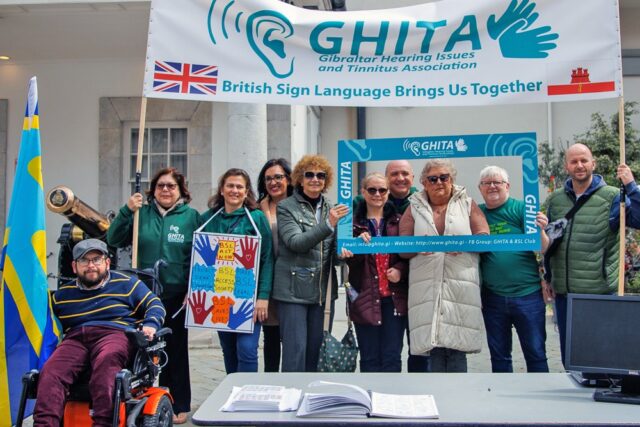 GHITA wants more people in Gibraltar to have access to a BSL interpreter whenever needed.

He cited, by way of example, medical cases in which a person has to wait for an interpreter to be flown in from the UK to attend a meeting with a doctor or surgeon, making it both expensive and slower when treatment is required more rapidly for whatever reason.

In emergency situations, this would be carried out online if possible or in writing, but as written English can be hard for the patient to read, this is not ideal.

“Maybe they [the Government] need a team that absolutely resources the Government, schools, GBC to basically provide the service for the community,” said Mr Triay.

“But, those few people in Gibraltar have the same rights as the rest.”

“In addition, these professionals are not here only to translate what is being said to a BSL user but to also get the message from the BSL user to the hearing,

“It is a two way interaction.”

“Our view is that Gibraltar is all for equality and it is all for inclusion, but as it is now, someone who is profoundly deaf and relies on BSL, they do not achieve their full potential.”

“They can never be a Chief Minister, it is not possible,” Mr Triay added.

Mr Picardo told Mr Triay and those gathered that he would look at the existing acts in the Scotland and Wales, which are ahead of the one in England.

“And for me he is actually considering and taking our recommendations at heart and I am very hopeful that he is actually moving to change,” said Mr Triay.

Supporting the rally was the GSD’s Shadow Minister for Health Elliott Phillips who earlier this year filed a Motion in Parliament asking the Government to promote a Bill for an Act to make provision for the recognition of British Sign Language on the terms introduced in the UK adapted to Gibraltar’s particular circumstances.

At the time he filed the motion he said: “It is clear to me that our deaf community has suffered systemic discrimination in access to basic interpretation and communication services across all public services particularly critical and acute services such as healthcare.”

“Our deaf and those with hearing difficulties cannot continue to be ignored and be socially excluded because of the lack of provision of critical interpreter resources.”

“I bring this Motion as a member of the Opposition to encourage full agreement with the Government in righting this longstanding discrimination.”