The newly-discovered Comet Neowise will transit the inner solar system for the first time in 6,800 years over the coming days and will be clearly visible from Gibraltar.

Neowise is currently hurtling through space nearly 200 million kilometres away from the Earth. On July 23, it will come closest to our planet.

The comet has been getting brighter and brighter in the early morning sky, and in the coming days, it is making an appearance in the evening after sunset.

“Neowise is one of the few comets visible to the unaided eye this century, an inner-solar system ‘intruder’ that might become known as the Great Comet of 2020,” said William Recagno of the Gibraltar Astronomical Society.

Mr Recagno said that although the comet is visible with the naked eye, a simple telescope or pair of binoculars can reveal more details, especially after twilight in the evening.

The comet survived its recent closest approach to the sun, and is now headed back toward the outer solar system.

Measuring about 5km across, Neowise is considered a fairly large comet providing sky watchers with a spectacular view from Earth.

In a statement alerting stargazers to Neowise, Mr Recagno explained the science behind comets, which are essentially dusty snowballs which orbit the Sun.

They are made of ices, such as water, carbon dioxide, ammonia and methane, mixed with dust.

These materials came from the time when the Solar System was formed. Comets have an icy centre (nucleus) surrounded by a large cloud of gas and dust (called the coma).

The coma is created as the ice in the nucleus is warmed by the Sun and vaporises.

Comets can develop two tails as they travel closer to the Sun: a straight gas tail and a curved dust tail.

The gas tail is created by the solar wind, pushing gas away from the comet's coma and pointing straight back from the Sun.

The dust in the coma is not affected by magnetic fields but is vaporised by the Sun's heat, and forms a curved tail which follows the comet's orbit.

WHERE TO LOOK OUT FOR THE COMET? 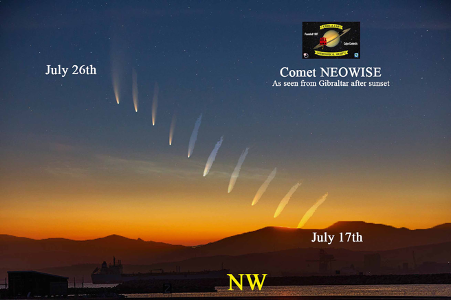 Picture of the bay where to spot Comet Neowise in the coming days.

To see the comet, start looking about one hour after sunset (10; 35pm), when you’ll find it just over the northwest horizon as the last of twilight fades into darkness. Look about three fists below the of the Plough, which is hanging by its handle high above, and perhaps a little to the right.
The best days to view the comet during the evening will come during the evening and is already visible. Thursday 23rd July will be the day it comes closest to the Earth.