On Wednesday we will be commemorating Armistice Day. The “Armistice” (Latin for “to stand arms still”) was an agreement to end the fighting of the First World War as a prelude to peace negotiations, which began at 11am on 11 November 1918.

It is therefore fitting that we should remember the service and sacrifice made by the many Gibraltarians who fought and died in all theatres of operations on land, sea and in the air during “The Great War”.

Let me start by redressing the misconception that Gibraltarian participation in WW1 was limited to a few individuals.

Without taking in account those who volunteered to serve in the Gibraltar Volunteer Corps (close to 500), I have documented over 170 others. Most served in the Army but quite a few in the Royal Navy and some even in the nascent Air Force. Eight served with the Canadian Expeditionary Force; four with the Australians (one Pte Alfred Ruggier was killed in action in France), one each with the New Zealand and South African forces and seven with the US Army.

These are all “bona fide” Gibraltarians - that is, those born and raised in Gibraltar with both or one parent also born here. That is a very high percentage of “fighting age” males out of a total population of just under 18,000 at the time. If we were to include those born in Gibraltar but of UK parentage – most of whom were the children of servicemen posted here at the time – the number would go up by another 200.

At the outbreak of the war, there were Gibraltarians already serving in both the Army and Royal Navy – these were in the main officers and senior ranks – professionals all, many of whom were veterans of the South African (Boer) wars at the start of the 20th century.

Amongst these was Captain (later Lt Col) Wilfred Mosley. The scion of an influential local family (his father was Sir Alexander Mosley-coal merchant and banker, Sanitary Commissioner, Chairman of the Chamber of Commerce and Maria de las Mercedes Francia). 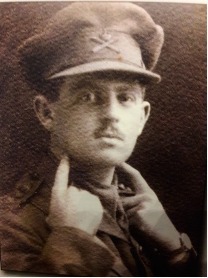 Commissioned into the Wiltshire Regiment, Wilfred was in command of a rifle company when he was deployed in the first wave of the British Expeditionary Force (BEF) to France in August 1914.

He served throughout the war, transferring first to the Machine Gun Corps (MGC) - a unit that appears to have been very popular Gibraltarians - and later to the fledgling Tank Corps. He was awarded the Military Cross (MC) for his actions at the Battle of Ypres (June 1915), three Mention-in Dispatches (MiDs) and later the Distinguished Service Order (DSO) whilst in command of 11th Battalion, The Northumberland Fusiliers during the Battle of Vittorio Veneto and the passage of the Piave River in the Italian Front.

He retired on account of ill health contracted on active service in 1922 and returned to live in Gibraltar where he died in his house (Marble House, 15 Bomb House Lane) in March 1949.

Mosley remains our most decorated soldier to date and lies buried in North Front cemetery.

Wilfred’s cousin, Louis Francis Sprague (son of Horatio Sprague US Consul and Antonia Francia), was also a regular army officer with the Royal Irish Rifles with service in South Africa and Aden.

A graduate of the Army Staff College, he took over command of the 2nd Battalion in the trenches in the vicinity of Hooge and Bellewaarde Lake in October 1915 leading them in the battles of Vimy Ridge and the Sommem.

He was in temporary command of 74th Infantry Brigade during the battles of Ancre Heights & the capture of Regina Ridge in September 1916 – to my knowledge the only Gibraltarian to have ever commanded an operational level formation (Brigade) in battle.

Unfortunately, he was severely gassed in November of that year and invalided back to England. He never recovered from his injuries and died in December 1924 at the Queen Alexandra Military Hospital in London.

Both Battery Quarter Master Sergeant (BQMS)Thomas Mannion and Sergeant Michael Pitman, were seasoned veterans serving with the Royal Artillery (RA) at the onset of the war. Mannion (his brother Frederick was an officer also with the RA) was awarded a MiD for service in Mesopotamia (modern day Iraq) whilst Pitman (of Pitmans Alley) was killed in action whilst serving with 89 Siege Battery in France in August 1917 and is buried at Trois Arbes cemetery.

Another regular soldier, John Undery (Son of William Undery, Port Officer) enlisted in the Royal Fusiliers 1901 and was a Company Sergeant Major by the outbreak of the war.

Commissioned in the field later that year-he was killed leading his men into action in October 1914. He is commemorated in the Menin Gate memorial, Ypres. Corporal Albert Jones Lancashire Fusiliers (son of Henry and Louisa Jones of Lopez Ramp) who landed in France on 20 Aug 1914 with the BEF, fought at Battles of the Marne and Aisne and was killed in the trenches in October 1914.

Of course, the vast majority who took up arms were volunteers, swept up by the great surge in patriotic fervour and eagerness to demonstrate their loyalty to the Crown.

When the two resident infantry battalions of the garrison were withdrawn in August 1914 and despatched to the Front, they took a number of young Gibraltarians with them, amongst them Privates Henry Balloqui; John Cerisola; Charles Picasso; Ernest Rice; Leonard Risso and Julio Wink who all enlisted with the Middlesex Regiment. Privates Leopoldo Bossano and Francis Pirie who both joined the Royal Fusiliers were tragically killed in action. Leopoldo (an uncle of Sir Joe Bossano) during the battle of The Somme in September 1916 and Francis a year later at Arras. Felix Benzimra originally enlisted as a clerk with the Army Service Corps in Gibraltar in February 1915 but he soon transferred to the Infantry (Dorsets) and by 1916 was a Lieutenant in the MGC with whom he earned the MC.

Others joined Regiments with Gibraltar connections like the Dorsetshire or Bedfordshire Regiments who had the “Castle and Key” on their cap badge or their father’s former unit like the Ross brothers who enlisted with the Seaforth Highlanders. Rifleman Kenneth Forbes was another. He distinguished himself whilst in action with the 4th battalion of The Rifle Brigade at Hooge from 9-11 May 1915 and was awarded the Distinguished Conduct Medal (DCM) – second only in merit to the Victoria Cross for gallantry. Forbes survived the war and returned to Gibraltar where he was well known for his work as a caterer/steward and within local Masonic circles. He died in 1949 and is also buried at North Front cemetery.

Many others joined whilst working or studying in England like Joseph Patron (later Sir Joseph Patron MC OBE JP, Speaker of the Gibraltar Legislative Assembly 1958-64) who enlisted in the Imperial Yeomanry (London Rough Riders) whilst at university. He was later commissioned and transferred to the MGC. He was awarded the MC whilst in command of a mounted machine gun detachment providing covering fire for the cavalry advance at the Battle of El Mughar during the Palestine campaign. He was shortly afterwards shot by a Turkish sniper through the throat but survived to fight another day! Incidentally his elder brother Alfred who was a Captain with the Bedfordshire Regiment was seconded at the time to the Egyptian Army in Cairo.

The story of Lieutenant Solomon Benzecry Royal Fusiliers, the “hero of Bourlon Wood” is relatively well known and his memorial inside the Lobby of Parliament rightly takes pride of place at all our Armistice Day commemorations. What is not that well know is that his younger brother, Abraham, also took part in the war and was decorated with the MC for his gallantry and initiative in pushing his machine gun section forward under heavy fire to support the infantry's advance at the engagement at El Tireh in Palestine in September 1918.

Part two of this article continues in tomorrow’s edition.