The Royal Gibraltar Police on Tuesday marked three years since the formal launch in Gibraltar of an intelligence-led policing strategy developed by experts in the UK to tackle a cross-section of crimes, including terrorism, while strengthening public engagement as a key tool in protecting communities.

Project Servator was launched in Gibraltar on June 1 2018, following a six-month trial and specialist training for a number of RGP officers.

It involves unpredictable, highly-visible deployments using a variety of specialist resources as part of an inclusive collaborative community strategy designed to deter, disrupt and detect a wide range of criminal activity including terrorism.

Project Servator was researched and developed in 2012 by experts from the UK Centre for the Protection of National Infrastructure together with the City of London Police, which began using this tactic in 2014.

Gibraltar was the first location outside the mainland UK where this project was licensed to operate, followed by Australia’s New South Wales Police in September 2019.

“Since we launched Project Servator in 2018, we have gone from strength to strength, building up networks with partners, delivering security awareness presentations and increasing our engagement with residents, visitors to Gibraltar and our business community,” said Richard Ullger, the Commissioner of Police.

“The pandemic has understandably adversely affected our engagement due to additional policing commitments, Gibraltar’s lockdown, no public events and border restrictions.”

“However, we have recently resumed Project Servator deployments in parallel to activity by our Traffic Taskforce, Operation Trojan Anti-Social Behaviour deployments and joint working with the Department of the Environment.”

“The Servator vigilance network is supported by the use of specialist police resources such as uniformed teams, armed officers and police dogs, as well as less visible measures, including plain-clothes officers and CCTV, the latter being a fantastic tool in the fight against crime.”

“Since adopting this tactic, we have invested significantly in specialist training for officers locally and in the UK and will continue to do so.”

Project Servator features as one of several Key Performance Indicators within the RGP’s Annual Policing Plan under the sections ‘Protecting our National Security’ and ‘A Safer Gibraltar’.

Over the past three years, Project Servator officers have engaged with hundreds of persons during their deployments at Gibraltar’s points of entry, crowded spaces and critical national infrastructure.

Some of those interactions resulted in individuals arrested for offences relating to the possession of drugs, stolen property, offensive weapons and forged documents, with others issued with fixed penalty notices for various traffic offences.

No individuals have been dealt with under Gibraltar’s Terrorism legislation. 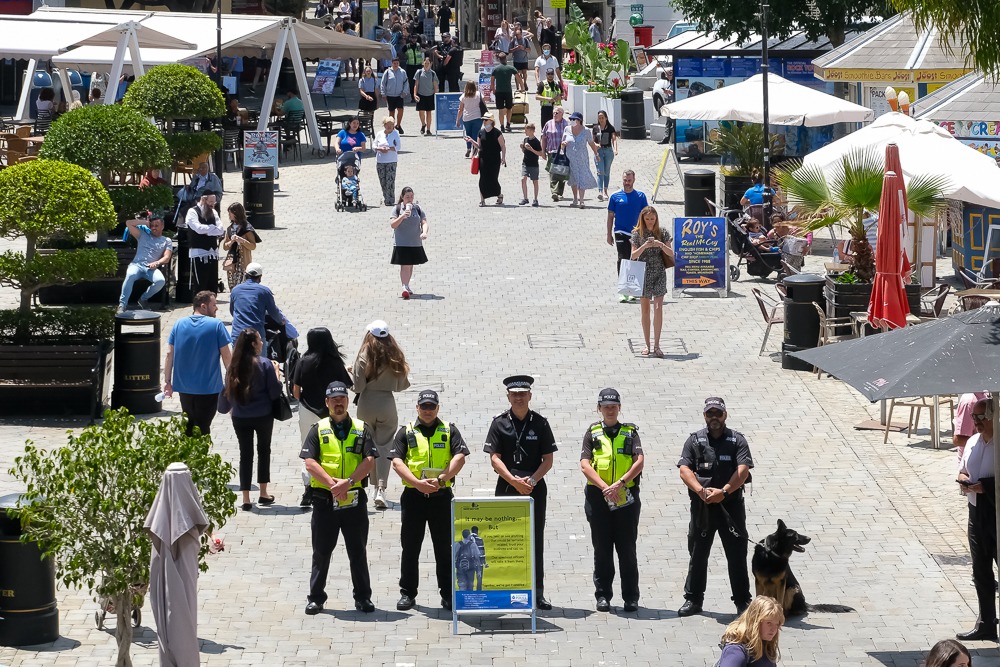 “These deployments are vital in creating a network of vigilance and a difficult environment for terrorists considering their targets or individuals looking to commit crime.”

“Project Servator tactics are not in response to a specific threat or recent tragic events across Europe.”

“This work forms part of wider efforts to keep Gibraltar safe through ongoing collaboration with a range of local, regional and international partners.”

“Each of us can play a part in keeping Gibraltar safe by being alert [but] not alarmed, reporting any suspicious behaviour either to security staff or a police officer in your area, through our online reporting portal: www.police.gi/reportonline or calling 20072500 if not urgent.”