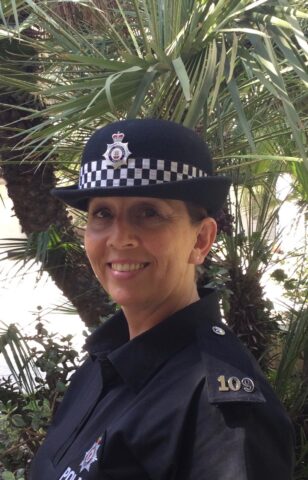 The Continuous Professional Development and Awards conference was a two-day event which provided an opportunity for delegates to hear from and to meet several inspirational female leaders in the police service.

“There were various amazing keynote speakers during the event and the BAWP award ceremony consisted of presentations being made for Bravery, Community Service, Excellence in Performance, an Inspirational award, Leadership and many more,” said Ms Berini.

“I am grateful for this experience, which left me feeling motivated and hugely inspired by these strong female leaders and, to top it off, the weather in Chester was great. I loved it!”

The British Association of Women in Policing is the only national organisation to embrace all women of ranks and grades. It supports the diverse roles that women play in British police forces and it now has members from forces across the UK as well as from the British Transport Police, the Royal Navy Police and the Isle of Man Constabulary.

Following the conference, Superintendent Jenny Bristow and PC Tiffany MacedoDine, from Devon and Cornwall Police will be arriving in Gibraltar next week to help the RGP’s Women in Policing group to move their agenda forward.

One of their initiatives is a mentoring initiative for Women in Policing, which will help to support and encourage women to progress through the ranks of the RGP. In this initiative, all the RGP’s female officers who have signed up to the scheme will be mentored by female police officers and staff from Gloucestershire and the South West Region.