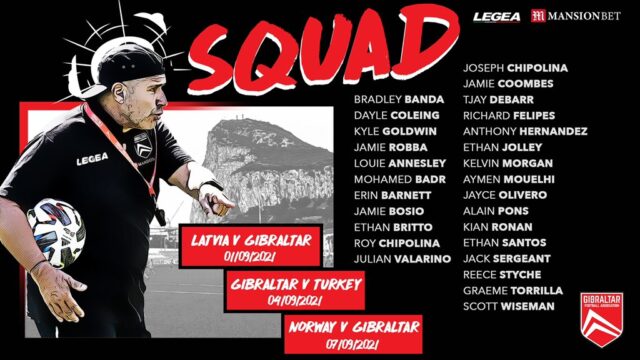 Gibraltar national team coach Julio Ribas has named his squad for the forthcoming triple header with the uncertainty on whether Tjay De Barr would be joining the squad now brushed to one side.
The squad includes new player in Richard Felipes along with the return of Joseph Chipolina.
Missing from the squad are Lee Casciaro and Liam Walker both of whom are presently injured but could join at a later date after the match against Latvia.

Gibraltar FA national beach coach Julio Ribas led a training session this Friday ahead of the international against Latvia on Wednesday and prior to his announcement.
Players were also assessed by the medical teams especially after the tough summer Lincoln Red Imps players have undergone.
With the Europa Conference League playoff now out of the way the national team selector had a chance to have many of his players present.
Not all players joined the training session with many of the Lincoln Red Imps players who had played last night making their presence at the start but not joining in.
Among those who did participate were Roy Chipolina and Joseph Chipolina, the latter making his return to national squad after over a year of absence due to injury.

Some of the others also present at the training session included

Kelvin Morgan now with St Joseph whose physical strengths are seen as one which challenge Reece Styche’s for a position upfront the latter also present. Both have been included

Jayce Oliver’s who returns from injury

Kyle Goldwin who is now competing for first spot in goal

Mohammed Badr whose move to Mons Calpe has reignited his season after a bit-part season with Europa after his move from lynx
All of which made it into the squad.

Others also making their presence were Scott wiseman, Kian Ronan, Erin Barnett, Joseph Chipolina, Ethan Jolley, Graeme Torilla and Jamie Robba plus players from the Under 19s.
This was turn out was significant with the numbers exceeding those attending in other sessions.
Notable for his absence was Tjay De Barr who this week played for Wycombe Wanderers in the Carabao Cup becoming an instant hero with his goals. Although many expected him to join the team tomorrow when they enter their social Bubble ahead of the match it was not known until this evenings announcement whether he was included in the squad. Tjay making it once again into the squad as expected.