Gibraltar was to start the second half with some optimism as Casciaro stole to put some pressure on Bulgaria. However, just as soon they lost possession and it was Gibraltar’s goal that was placed under pressure. First with Despodov seeing a shot deflected to corner, and next Gibraltar facing a second corner with less than five minutes of the second half played.
Kirilov was to lift the pressure off Bulgaria’s shoulders as he latched onto a rebound to send a thundering drive to the top of the net for the 3-1 on the 51st minute after Histrov had ploughed his way to the byline to send the ball into the goal mouth.
Just three minutes later Gibraltar’s hopes came crumbling down as Stefanov met well Despodov’s cross with a header and reacted quickest to have a second attempt as his first header was blocked by Coleing. Gibraltar’s defence was slow in reacting to clear the rebound allowing Stefanov with a second header just off the post and making it 4-1.
It was Bulgaria who was to start making changes to their team on the hour mark. Ribas was not to wait too long making three changes as the pace of the game flattened and tired legs were seen among Gibraltar players.
Surprisingly the changes saw just one offensive change with Lee Casciaro making way for Reece Styche. The other changes seeing Torrilla who was playing in midfield replaced by Sergeant, a defender, and Annesley replaced by Ethan Jolley.
Gibraltar lived dangerously as miscommunication between club mates Coleing and Lope saw the latter attempt a clearance sending the ball over Coleing as the latter came away from his line. The ball luckily cleared away from danger but leaving Gibraltar’s goal momentarily exposed as Bulgaria piled the pressure in the final third of the field.
With few real offensive options and a mainly defensive looking team on the field Gibraltar were being penned inside their half with Reece Styche as the lone figure upfront. Frustrations also seen emerging at times as the link up between midfield and the frontline looked inexistent.
Ribas was to make another change on the 71st minute as Walker gave way for youngster Nicholas Pozo to get another cap under his belt. The young player, playing in Spain this season, getting a second chance to get competitive international experience with his second appearance in the Nations League for Gibraltar.
Pozo’s first intervention saw him cleverly earn Gibraltar a set piece chance as he forced a foul up the field inside Bulgaria’s half. Bulgaria was to clear but only as far as providing a throw in which saw Wiseman put their defence under pressure with his long throw. The hosts, however, closing down well and preventing Gibraltar from any chance at goal.
Fully in control of the game Bulgaria added a fifth on the 80th minute as Petkov was put through by a well timed through ball down the left, leaving the Bulgarian to drive the ball past Coleing on the first touch.
Ribas was to make another change with eight minutes left introducing Joseph Chipolina, another defender, on for Britto. Gibraltar defended deep with a goal mouth scramble on the final minute of the official 90 minutes preventing a sixth for Bulgaria.
Gibraltar now face a final Nations League group match against Georgia with no prospect of lifting themselves from the bottom of the table and facing the prospect of a play-off against one of the other three bottom of the group table teams in League C if they are to maintain themselves in League C for the next edition.
Gibraltar’s defensive tactics from early in the match in what was a crucial Nations League group match and facing survival was highly criticised once again as Gibraltar faced another heavy defeat. Gibraltar finishing with eight defenders and with hardly any goal attempts registered in the 90 minutes.
Gibraltar now face a Georgia side on Monday who will be looking to secure their unbeaten run after securing top of the table after their victory against North Macedonia. 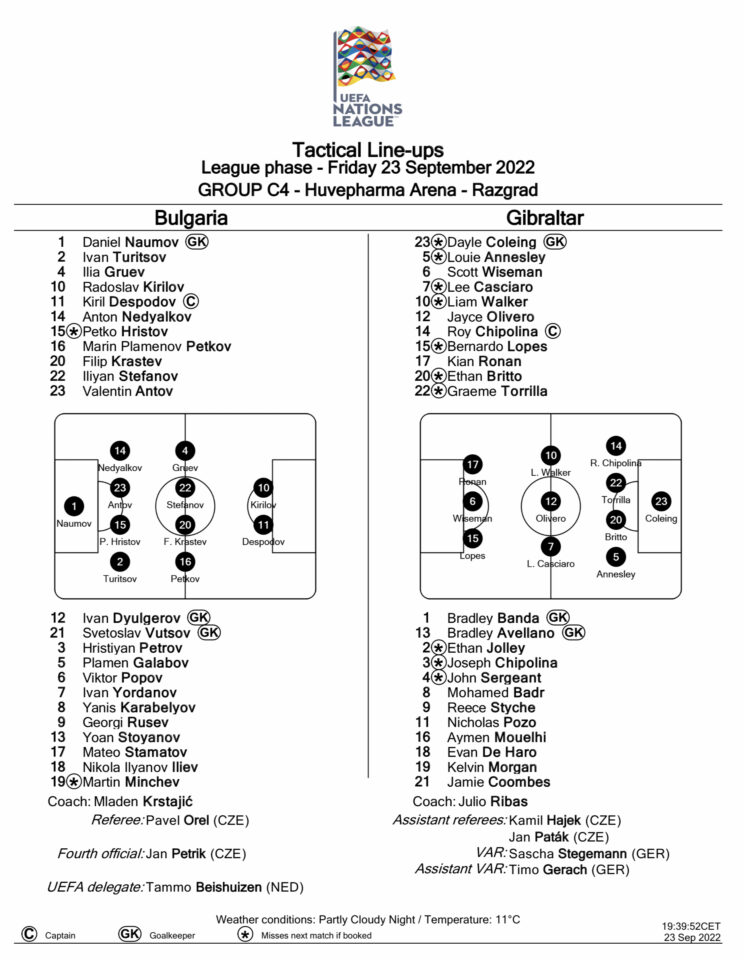