Gibraltar head coach Julio Ribas has announced his long squad from which the final selection for the first of Gibraltar’s Nations League C squad will be chosen.
With players training these past days the squad is getting ready to fly to Georgia where they begin their campaign on June 2.
Notable among those listed is the return of Dayle Coleing and the additional option of Harry Victor.
Lee Coombes who has performed well for Bruno Magpies is also included in the long squad. Bilal Douah, Nicholas Pozo, Omar Salah, Stefan Thorne, Ellis Wilson and Adam Garcia are among others named Adding to the number of youth players getting experience with the senior squad.
Some of the players have previously joined the senior squad, although for some it is their first official time they have been named.
A total of thirty-eight players have been named for the start of the Nations League campaign.

Gibraltar’s football national squads, both the U21s and seniors returned to the training grounds after a short break following the end of season.
Both squads will be in action next week with the Under 21s involved in three matches this June whilst the senior squad face an unprecedented fixture schedule with four Nations League C matches in a period between June 2nd and June 12. During this period they play Georgia away from home first, North Macedonia both home and away and Bulgaria at home.
The under 21s play Netherlands 7th June(away), Bulgaria 11th June (home) and Wales 14th June (away). 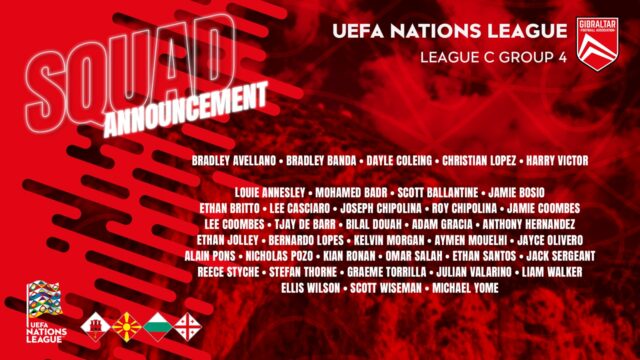