The Gibraltar FA confirms that a full fixture list for the remainder of the domestic season has been agreeed. Fixtures in the Championship and Challenge Groups of the National League, together with matches in the Rock Cup, were due to be published online.

The association has stated that it is now envisaged that the final match in the National League will take place on the May 16 with the cup final due to be played three days later on May 19.

“Extraordinarily this season, and owing to the severe disruption caused by the COVID pandemic, a single draw was carried out for the Rock Cup earlier this week. The draw included matches in the First Round of the competition, but also the draws for the Quarter Finals and Semi Finals of the Cup. As there will be a quick turnover of matches in the Rock Cup, it was imperative that participating clubs could plan their progress in the competition and know who would they be playing and when.”

“The fixture list has been compiled with the assistance and support of the Gibraltar Football League Association, and the Gibraltar FA is grateful for the positive and constructive spirit in which discussions between both parties have always been held. Both the Gibraltar FA and the GFLA are mindful of the fact that this is an extraordinary season, in extraordinary times, and that all members of the Gibraltarian football community have pulled together to ensure we can complete our domestic obligations and thus protect the sporting integrity of our competitions. This is particularly important this year given that, for the first time, Gibraltar will have four representatives in UEFA club competitions this summer.”

The Rock Cup fixtures (which can be viewed below) were originally scheduled to start play during the international break, however, objections to the times scheduled has since seen the fixtures moved to start immediately after the international break in the first week of April.
St Joseph’s will be playing Bruno’s Magpies with Europa playing Europa Point in the first round. The winners of these two matches will meet in the quarter finals setting up a possible early encounter in the cup between Europa and St Joseph’s.
Lincoln Red Imps will have a tough match against a very defensive looking Lions in the first round. The winner of which will go on to meet Lynx in the quarter finals.
With the five of top teams likely to face each other by the quarter final stage the doors will be open for deep competition in the league for the top three spots guaranteeing European competition action this summer. 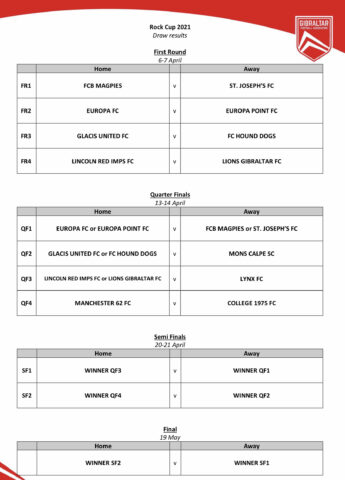 Gibraltar FA signs up to UEFA’s condemnation of Super League