The Rock Cup returns to the Victoria Stadium after a year’s absence. Last season’s Rock Cup was terminated abruptly due to the Covid-19 pandemic which at the semi-final stage.
The cup, which provides the winner with an automatic place in the Europa League is among one of the key objectives of Gibraltar national league clubs trying to make a bid for the financially beneficial European club competitions.
This evening will see St Joseph’s open up the cup competitions against Bruno Magpies. The latter come into the game after a 5-1 defeat at the hands of Challenge group rivals Glacis United. Having dropped into the Challenge group Bruno’s only hope for European club competition is through the Rock Cup making this evening’s match crucial for them.
St Joseph’s, who started 2021 on the wrong foot with defeats against Lincoln Red Imps and Europa turned the tide with a convincing 4-0 win in their first Championship Group match against Mons Calpe. They will be looking at maintaining their momentum which has seen them keep to the top three in the league throughout.
The second Rock Cup match tonight sees second placed Europa take on bottom of the league Europa Point. The latter have seen a decline in their performances after internal problems at the club has seen the departure of coach Steven Cummings and disruptions among key local players.
Europa surrendered their lead at the top of the league table prior to the Easter break in a 3-0 defeat at the hands of a Lincoln Red Imps. They will be looking to show that the defeat was a momentary lapse as they bid for all the titles once again this season.
The club were boosted last week by the selection of one of its youngest players into the national squad as Dylan Borge made his debut for the national team. They will also be looking closely at the injury sustained by Jayce Olivero which kept him on the bench in the match against the Netherlands.
Tomorrow will see two further matches as Glacis United take on Hound Dogs and Lincoln Red Imps square up to Lions.
This latter match is likely to prove one of the main matches in this round with Lions already proving they have the capacity to disrupt effectively attacking sides such as Lincoln Red Imps.
Commenting before the match Lincoln Red Imps head coach Mick McElwee told the official Lincoln Red Imps online page that this was a “tricky match.”
“As we come out of the International break, we now start a run of six weeks where we will be playing continuously from here until the conclusion of the season,” commented Head Coach, Mick McElwee in Lincoln Red Imps official website . “We just want to get cracking now; the first game is a very tricky Rock Cup clash with Lions Gibraltar.
“They will make it difficult for us and we will have to be at our best and reach some high standards if we are to progress into the next round.
“I know that the players are looking forward to it. We want to continue the good form that we have been in and pick up from where we left off before the break.” 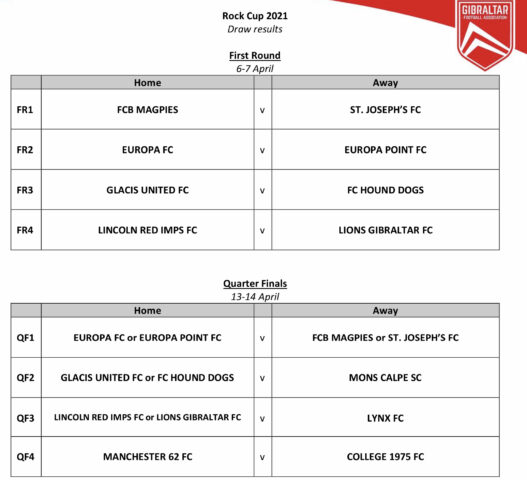