Camaraderie and support surrounded Wayne Warwick and his stepdaughter Sofia Camporese, 17, on Saturday morning as they completed a half-marathon distance of 21.1km in aid of the Stroke Association in the UK.

Mr Warwick’s son Wesley suffered a stroke on August 29 and the family wanted to give back and help raise much-needed awareness of strokes and funds for the UK-based charity.

Setting off from Casemates at 9.30am, the duo were followed by approximately 15 fellow runners, many wearing purple, the stroke awareness colour.

As they ran with social distancing in mind, Mr Warwick full of energy laughingly celebrated having completed the first km as they crossed the runway. 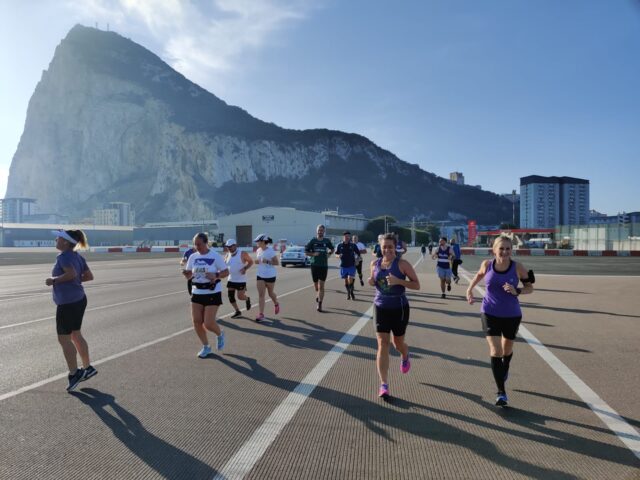 Never without someone by his side including close friends and parents of his son’s friends, Mr Warwick also had family located at various spots cheering him on.

With the heat of Saturday morning being somewhat warm for this time of the year, the run was not an easy one, especially for 800m sprinter Ms Camporese who had never run a distance further than 10km before. 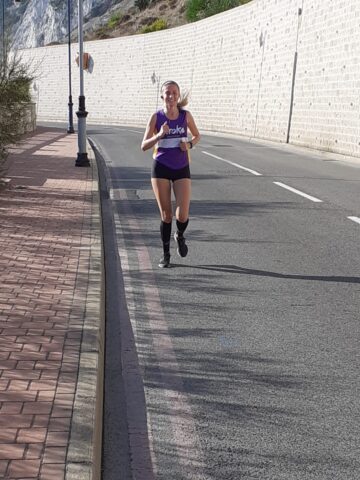 By the 15km her legs, especially her quads were on fire, but she did not stop, she was determined to complete the half marathon for Wesley.

Flanked by fellow runners who paced her the remainder of the way as she battled through the pain, she somehow found it in herself to sprint across the finish line in Casemates to a group of welcoming friends and family.

Sometime later, Mr Warwick and his entourage of supporters also crossed the same finish line to a guard of honour and a Mexican wave.

As is often the case when you complete a challenge, you are overcome with emotion. This was the case for Mr Warwick but his emotion was twofold: he had his son in his mind every kilometre of the run.

“I am a bit overwhelmed,” he said, as he gathered his thoughts and emotions moments after he crossed the finish line.

“All the support, the people running with me, all of the runners. I wasn’t expecting so many people.”

“The family and everyone else cheering us along all the way.”

“I’m just here thinking ‘OK it was two hours and 54 minutes but that is nothing compared to what a stroke survivor has to go through for the rest of their lives’.”

“In a half hour, I will be fine but they still have a lot to go through and if we have raised some awareness, I am really excited and happy about that,” he said.

Mr Warwick pointed out that the irony of the fact that the main thing to remember for stroke victims, is FAST, something he described himself as anything but.

“S for speech, can they speak or is it slurred?”

“T for time because time is important.”

Anyone wishing to donate to the fund can do so at https://www.justgiving.com/fundraising/wayne-warwick?fbclid=IwAR0rF3EePw7uQ2XG5ixiuriq0re65euxkqHT8wKus43LcAV1yX3cIfGqp-M&utm_id=124 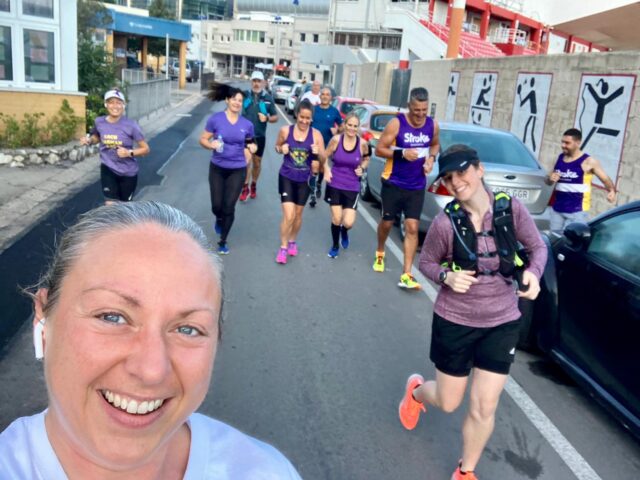 Both of the Warwick men played for the local rugby team, Buccaneers, and the unity of the sport was recently seen when members from all of the Rock’s rugby teams joined Mr Warwick, and stroke survivor John Shephard, on a walk to the top of the Rock.

With Wesley still in their minds, the rugby fraternity set up a Just Giving page to help fund new specialised physiotherapy equipment for him.

With a quiver in his voice Mr Warwick apologised for being emotional and said, “in two days it has got to over £10,000.”

“My family and me are just extremely grateful for all the support we are getting and not just financial, emotional and physical support, there is someone there all the time,” he said.

“There is always someone to talk to, someone to have a coffee with. Family, friends, work colleagues everybody.”

“You know what the Gibraltar community is like. When it comes to it, everyone pulls together.”

“It is a bad time now when you think about it, the crisis and people losing jobs, furloughed, businesses closing and to receive that in 48 hours is absolutely overwhelming.”

The Just Giving page has now received over £12,000 and anyone wishing to donate can do so at

Pics in order of appearance in the story by Emma Foy, Christine Montes and Zoe Fidock.

Andalucia seals off region in Covid-19 move, with knock-on impact at border with Gibraltar

Couple who found love in lockdown tie knot in Gibraltar, ‘the new United Nations of marriage’