Sam had been growing his curly brown hair for two years and has donated his hair to ‘The Little Princess Trust’, a UK based charity that provides free real hair wigs to children with cancer.

The charity relies on people, just like Sam, to donate their hair to their cause and has provided over 12,000 wigs to children over the years.

On Friday morning at Prior Park School, Lauren Lavelle from Classic Cuts began to snip at Sam’s hair, with the shave-off held during the school’s fundraising coffee morning at Cancer Relief. 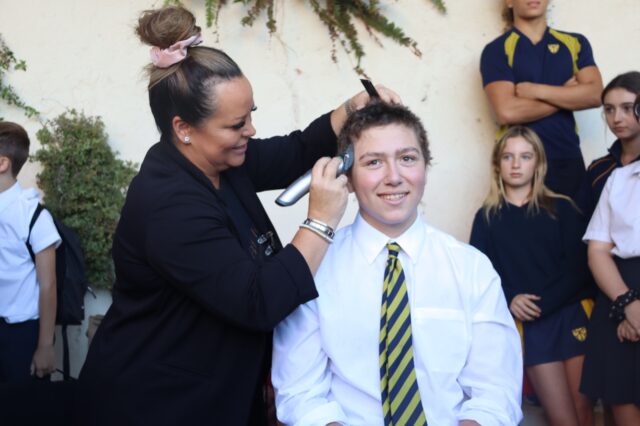 Although initially excited about the idea, he found himself nervous that morning at the prospect of losing his hair.

“When I decided last month to cut my hair, initially it was to cut it a little bit shorter,” Sam told the Chronicle.

“I thought about donating my hair to the Princess Trust when I saw a celebrity had done something similar for charity.”

“When I looked up the charity and all the work it does for children with cancer and no hair, I immediately decided I was going to shave all my hair off and donate it to the princess trust who make wigs made from real hair for those children than need it.”

He added his friend Ruby Brooks came up with the idea of raising money for Cancer research on top of my initial idea of donating his hair to the Princess Trust.

“I never dreamed in a million years I could raise so much for this amazing charity and would like to thank everyone who has donated to this incredible cause,” he said.

Sam is going to keep his online donation page on JustGiving open for the next week.

“Hopefully I can raise some extra donations for cancer research,” he said.

Donations can be made online via: https://justgiving.com/fundraising/sam-robinson48