This is the second article in the Impressions of Italy series. We have explored Bologna. We are now leaving Pisa in a coach for Siena and on the way we shall stop at San Gimignano. The one striking feature of this enchanting town is its many massive towers which break the skyline and give it the appearance of an impregnable fortress.

Towers are a common feature of many Italian towns. They were constructed to keep foreign enemies at bay, but also, sadly, for the internecine struggles which characterised Italian life. The taller and sturdier your tower the more sway you had over your neighbours. They literally had to look up to you to see what you were up to!
The main church in San Gimignano is the cathedral of the Collegiata. The facade has the odd feature of two side doors but no main entrance. It is full of art treasures, but we are going to concentrate on one particular aspect of the collection: the chapel, altar and paintings of Santa Fina, the patron saint of the town. It is, in a way, paradoxical that a town bristling with towers should have chosen so frail and innocent a patroness as Santa Serafina, usually referred to as Santa Fina. 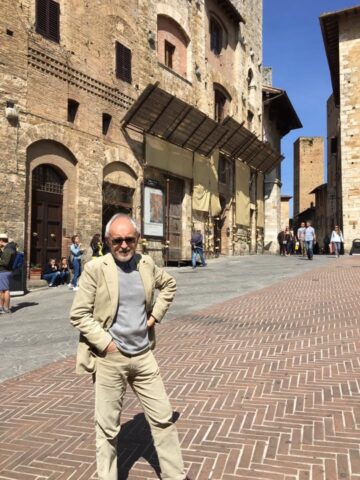 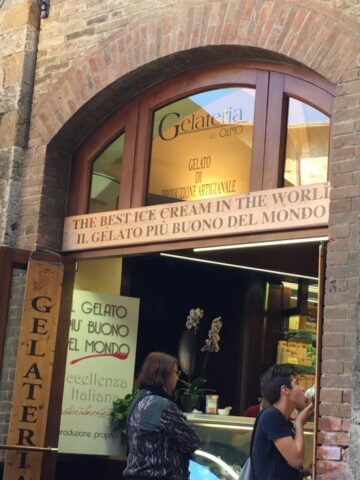 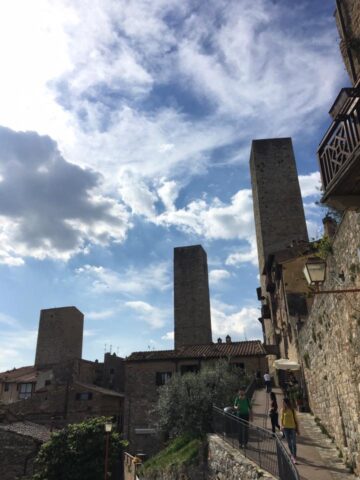 When we stood outside the railings of her chapel, we noticed there was a plank of wood leaning against the side wall. Was this an example of a poor medieval saint practising some harsh penance? The truth was not as masochistic as that. Poor Santa Fina became paralysed in childhood and took to sleeping on a pallet of wood; whether this was a conscious decision to mortify herself or just that the hard surface of the pallet made it easier for her to sleep, we shall never know.

Santa Fina’s bones now rest under the altar of her chapel. This exquisite Renaissance architectural jewel was designed by Giuliano da Maiano. More strikingly, the two side walls bear frescoes by Ghirlandaio. The legend claims that Santa Fina had a vision of the pope, St Gregory, who told the poor ailing girl when she would die. Ghirlandaio has not only painted a reposeful Fina, her hands joined in prayer, but has included a kind of ‘still life’ with a gold platter resting against wall and a wine flask and fruit on a dish. The painter seemed to want to emphasise that Fina’s holiness was firmly anchored to this earth. The other fresco, the Burial Scene, is more pompous: prelates and nobles surround the body of the young girl lying on her bier.

A visit to the Palace of the Commune is de rigueur for anyone interested in Dante. Here, in the great General Council Hall, on the 8th May, Dante, as Florentine ambassador, urged the citizens of San Gimignano, to join the Guelph league. The hall is dominated by a great Madonna and Child (a Maesta) surrounded by a crowd of angels and saints and venerated by the kneeling Podesta Nello di Mino dei Tolomei. The great fresco is dated 1317 and signed by Lippo Memmi: Lippus Memi de Senis Me Pinxit.

The Palace of the Podesta has a tower known as the ‘Rognosa’ (Scurvy). It is 51 metres high and statutes of 1255 established that no other tower should surpass the ‘Rognosa’. However, statutes are made to be broken and the tower of the palace of the Commune, appropriately called ‘la Grossa’, is 53 metres high!
In E.M. Forster’s Where Angels Fear To Tread, San Gigminano appears disguised as Monteriano and Santa Fina becomes Santa Deodata.

We recall having an appetising lunch consisting of delicate fish, crowned by a succulent ice-cream, bought at ‘il gelato piu buono del mondo’; but then all the ice-cream parlours in Italy make the same boast! 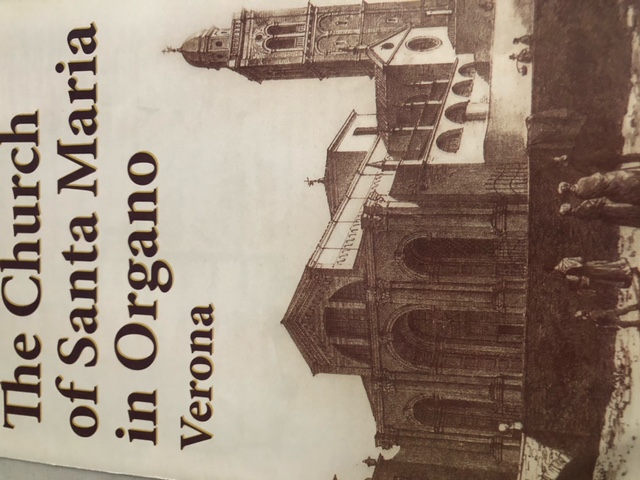 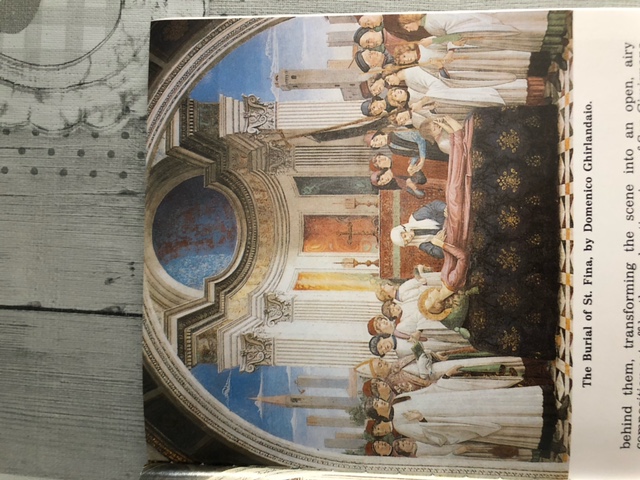 The day we arrived we found a chic cafeteria in Piazza Bra, where the Arena is situated. Bra is the Veronese dialect version of braida, meaning ‘meadow’. We sat down and became aware a huge eye belonging to some wooden pharaoh was glowering at us. There had been a recent performance of Verdi’s Aida and the props had been dismantled and were stacked up outside the theatre.

As you walk past the great Roman arena or along the embankments or over the bridges that span the broad curves of the Adige, you are struck by the spaciousness of Verona. Verona is also a very beautiful city-no church or building is unpleasant to the discerning eye of the pilgrim or informed traveller.

As often happens in Italian cities, the magnificent buildings and rich artistic creations are expressions of the iron rule of one family. In 1263, the Scaligeri began their successful 127-rule of Verona. They used ruthless tactics in their rise to power, earning nicknames like Mastino (Mastiff) and Cangrande (Big Dog). Once in power the Scaligeri brought peace to a city racked by strife and inter-family rivalry. When we read about them, we forgave them their misdeeds when we learnt they had welcomed the exiled Dante! In fact, Dante dedicated his Paradiso, the final part of the Divine Comedy, to Cangrande I. Castelvecchio, the spectacular castle built by Cangrande II is now one of the Veneto’s finest art galleries.

Two churches are particularly impressive: San Zeno Maggiore which was built between 1120 and 1138 to house the shrine of Verona’s patron saint, San Zeno. It is northern Italy’s most ornate Romanesque church. The striped brickwork is typical of similar churches in Verona. Santa Maria in Organo has very fine inlaid woodwork-the best in all Italy. The artist was Fra Giovanni da Verona, who worked for nearly 25 years on these stunning examples of illusionistic marquetry. You should look for the little animal pictures: the rabbit on the lectern and the owl and cockerel in the sacristy.

The hub of Verona’s social life is the Piazza delle Erbe. This used to be the city’s old herb market; now it has become a buzzing piazza lined with art galleries, upmarket boutiques and inviting pavement cafes. The Venetian lion which stands on top of a column to the north of the square marks the absorption of Verona in 1405 into the Venetian empire. There’s also a fountain in the middle of the square: worth a look as the statue at the centre dates from Roman times and is a reminder that Verona was first colonized by the Romans.

Everyone associates Verona with Shakespeare’s romantic tragedy: Romeo and Juliet. ‘In fair Verona we lay our scene.....’ It comes as no surprise that there is a Casa di Giulietta, though the connection with Juliet is based on nothing more than its picturesque courtyard and balcony. Though the Capulets and Montagues did exist, there is no record that they were at loggerheads. The bronze Juliet has been shoved into a corner, her right breast polished bright by the groping hands of eager lovers. Our daughter, whose name is Giulietta, was given a special certificate just because of her name! 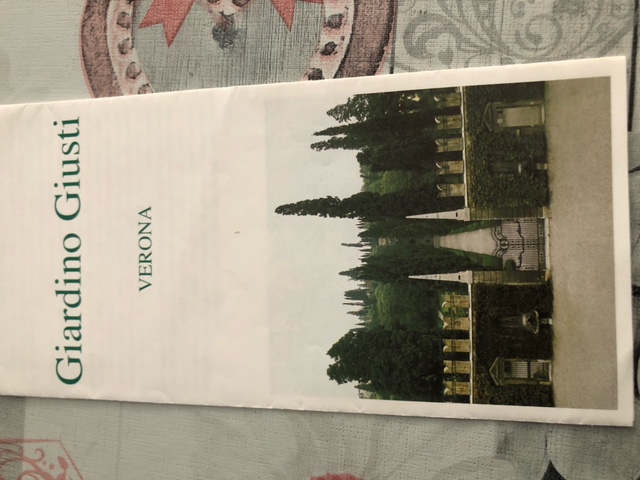 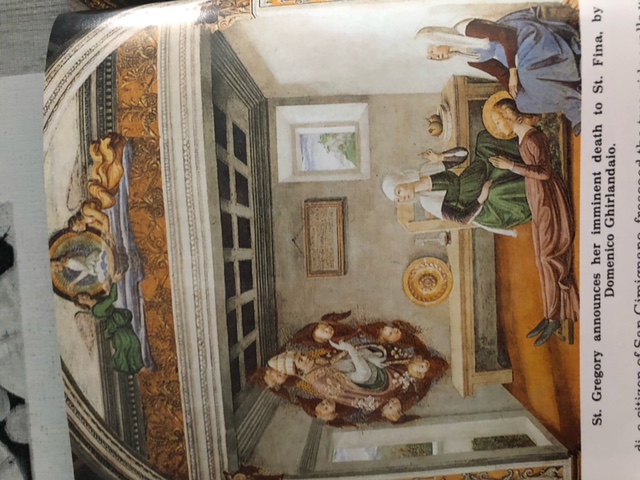 Hidden among the dusty facade of the Via Giardino Giusti is the entrance to one of Italy’s finest Renaissance gardens. The Giardino Giusti was laid out in 1580 and, as with other gardens of the period, artifice and nature are deliberately juxtaposed. The lower garden of clipped box hedges, gravel walks and potted plants is contrasted with an upper area of wilder woodland, the two parts linked by stone terracing. A cypress avenue climbs up to a grotto under a towering ‘mascherone’ (grotesque mask) which can emit tongues of flame from its mouth. There is a deceptively small labyrinth. I wandered into its intricate maze and it took me the better part of half an hour to find my way out!

Our next article will give an account of our visit to the Sirmione Peninsula which lies at the southern most end of Lake Garda.