Signs of life dating back to the Mesolithic period have been found on a country estate in Dumfries and Galloway.

A tiny burnt hazelnut shell found by volunteers on an archaeological dig at the National Trust for Scotland’s Threave Garden and Estate has been dated to between 8,547 and 8,312 BC.

The Galloway Glens community archaeology project Can You Dig It found the shell during a dig in 2019 at Little Wood Hill, which dates back to the Iron Age. 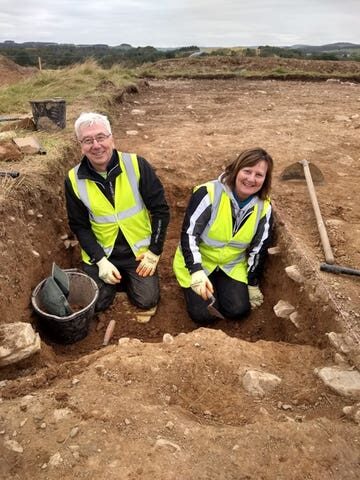 Since then, some of the carbonised material recovered has been sent away for radiocarbon dating at the Scottish Universities Environmental Research Centre (SUERC).

A sample recovered by the volunteers from the end of the ditch, where it marked the eastern side of an entranceway, has now been dated to between AD 75 to 214 – firmly within the Iron Age, while the hazelnut was dated to the Mesolithic period.

Derek Alexander, head of archaeology for the National Trust for Scotland, (NTS), said: “Over the years we have gradually built up an understanding of past human activity at Threave throughout prehistory and history.

“This radiocarbon date for Mesolithic activity is really exciting, as it is the first evidence we have from this time and is the earliest date recovered at Threave so far.”

Hazelnuts have been discovered on prehistoric sites across the country and have long been established as a favourite snack of the Mesolithic people.

The people of Galloway at that time would have lived nomadically, moving between water and food sources as they became available.

Traces of human habitation within Scotland go back to around 12,000 BC, within the Upper Palaeolithic, but a period known as the “Loch Lomond Stadial” saw a dramatic climatic downturn in Scotland around 10,900 BC.

This abrupt return to severe cold conditions caused the regrowth of glaciers and is considered likely to have caused a complete depopulation of Scotland during this time.

By around 9,700 BC however, the glaciers and ice-sheets had receded and human life began to return to Scotland.

Experts said it is possible that the people who burnt this nutshell at Threave could have been among the first to re-populate the country.

Claire Williamson of Rathmell Archaeology, who is delivering Can You Dig It for Galloway Glens, said: “The results from these two dates continue to add to the surprises that have already come from this little-known site.

“Having the Iron Age date of the enclosure confirmed was what we were hoping for, but to also have this small indication of Mesolithic life on the estate is amazing.

“This could not have been possible without the hard work of the volunteers, whose enthusiasm for the archaeology never faltered, even in high winds.

“It’s great to see how, even at this stage, the results of their hard work continue to add to our archaeological knowledge of the area.”

The site at Little Wood Hill was first revealed to date back to the Iron Age following work carried out under Mr Alexander on an NTS Thistle Camp in 2014.

Dr Samuel Gallacher, operations manager for Threave Garden and Estate, said: “We love to surprise our many visitors with unexpected discoveries and stories at Threave and finding out about this new evidence of our very ancient history will no doubt fascinate many.”