An earthquake registering 6.0 on the Richter Scale shuddered Tokyo on Wednesday morning, but it was nothing compared to the tremors felt at the Ariake Urban Park where Sky Brown and her 12-year-old rival Kokona Hiraki proceeded to rip up the Olympic record books. 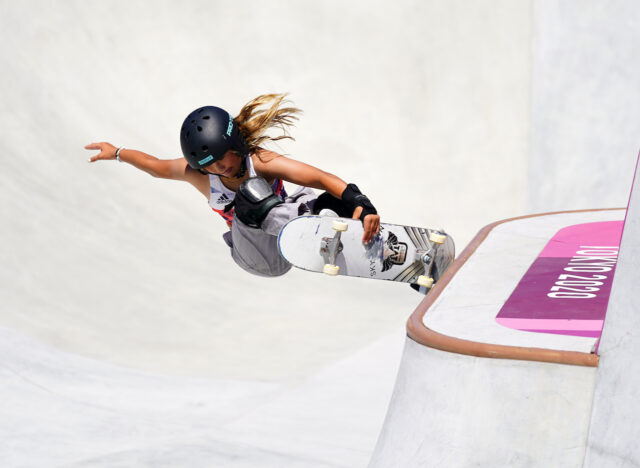 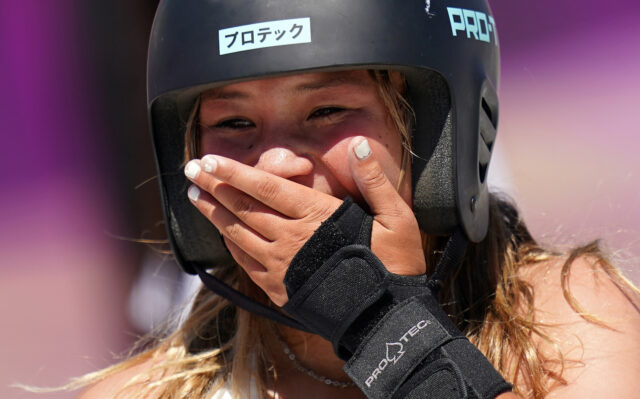 Aged just 13 years and 28 days, Brown won bronze in the women’s park competition, after a dramatic podium-or-bust final run of the competition in which she landed a move called the kick-flip indy that had been eluding her all day, and proved enough to make her Great Britain’s youngest Olympic medallist.

Incredibly, she was beaten by the even-younger Hiraki, who thus became the youngest Olympic medallist in 85 years, while her team-mate Sakura Yosozuma, who had qualified for the final in fourth place, nailed back-to-back 540s in the opening run of the final, for a score of 60.09 that proved enough for gold.

“I’m so stoked,” said Brown, who along with Hiraki is technically too young to make the lower entry requirements for the Youth Olympics.

“I can’t believe it, it’s like a dream. I thought I was going to get it (the trick) in the first or second run. I was little shocked and I was like, ‘am I going to make it?’

“My dad said, ‘it’s just a contest, if you fall it doesn’t define you’. So, yeah, honestly that made me feel better. It is just a contest. I just wanted to land it. I didn’t really care what place I got.”

On the hottest day yet of the baking Tokyo Games, with temperatures tipping 33 celsius amid stifling 90% per cent humidity, Brown exhibited maturity beyond her years, recovering from falls in each of her first two runs of the final to come good when it mattered, a score of 56.47 lifting her into a podium place.

Ranked third with one competitor, the favourite Misugu Okamoto, to go, Brown still faced the prospect of leaving the Games without a medal. But when Okamoto, the reigning world champion and leading qualifier, failed to go clean on her final run, the Briton’s ascent into the Olympic history books was confirmed.

Brown’s achievement is all the more remarkable for the fractured skull and broken bones she suffered during an horrific fall in training last year.

“That accident was pretty bad,” Brown admitted. “It was a hard time for my parents and a hard time for a lot of people and coming back and getting the bronze is really cool. I’m really happy. It’s really made me stronger.”

Brown, who was born in Miyazaki, Japan, to a Japanese mother and British father, competed at the US Open in 2016 at the age of eight, and first elected to compete for Great Britain in 2018.

She arrived with plenty of profile, having won the US version of ‘Dancing With The Stars: Juniors’ in 2018, and expressed her ambition to achieve the almost unprecedented feat of competing in two sports – skateboarding and surfing – at the Games, something from which she was subsequently dissuaded. 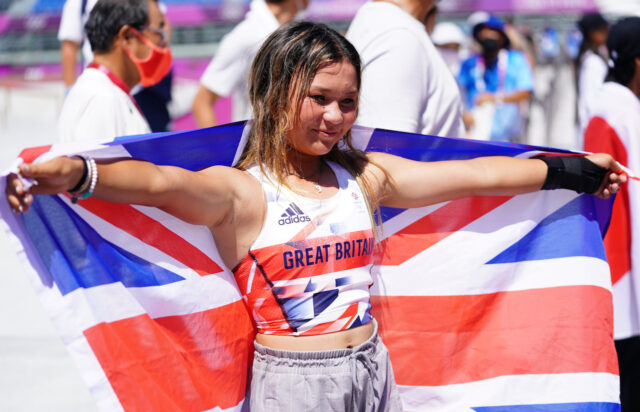 In 2019, Brown finished third at the World Skateboarding Championship, and the following year she effectively secured her Olympic qualification by picking up a bronze medal at the Park World Championships in Sao Paulo, Brazil.

Last month, she had warmed up for the Games by winning gold in the prestigious X Games, although neither of her key Olympic challengers, Okamoto and Hiraki, were present.

Hiraki was first up of the major contenders in qualifying, with her best score over three runs, 52.46, comfortably surpassed by Brown. But Okamoto, the 15-year-old defending world champion, laid down her mark with a leading 58.51.

Ultimately it was Yosozumi who emerged to take gold, with Brown expressing her delight at bronze, and her eagerness to go home to see her younger brother Ocean, and head for the surf, presumably to hone her skills ahead of a potentially audacious bid to qualify for a second sport in Paris in three years’ time.

“I really hope so, I’m really going to try surfing,” she added. “I’m going to go surf a lot after here. I’m excited to see my brother again, and I’m going to go and party with my friends.” 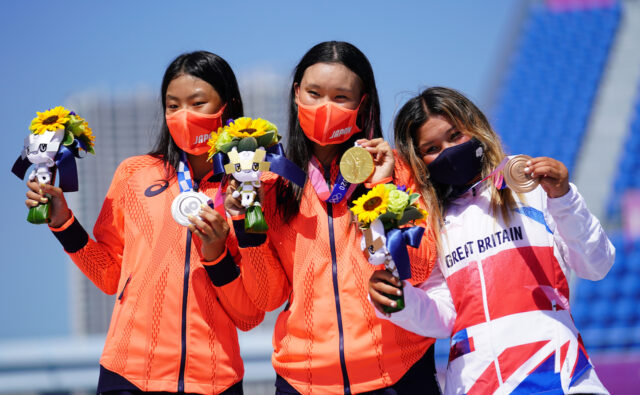 Brown’s dad Stu, who was born in Britain and whose parents live in the New Forest, admitted he may be powerless to prevent his daughter’s bid to medal in another Olympic Sport.

“It’ll be up to her by then,” he said. “She’ll be 16, and it’s hard enough now. But she’s straight back to school and do the things that families do. We’ll take her off social media for a little while.”