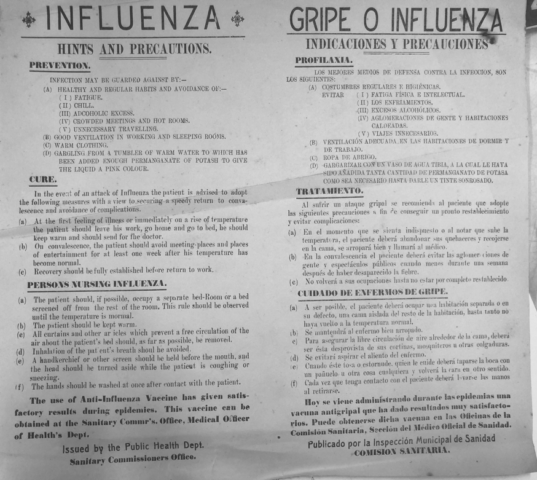 The following is a four-part account of how the Spanish flu impacted Gibraltar in the early 20th century. Many of the facts contained within have been obtained from information gleaned from the Gibraltar National Archives. Before understanding the effects in Gibraltar it would be desirable to have an appreciation of the Spanish flu in general.

The influenza epidemic, which was first reported during World War I in 1918, was termed the “Spanish flu” not because it originated in Spain but because the Spanish press at the time was not restricted as Spain was a neutral country. Instead the press had been curtailed in the belligerent nations in order to sustain morale. The first case documented was in March 1918 in Kansas, USA, believed by some to have been avian or mammalian(swine) in origin. Subsequently cases were recorded in other parts of the USA, UK, Europe and the rest of the world. There were apparently four waves and altogether it is estimated that approximately 500 million cases occurred with 25-50 million deaths. At the time many troops were being deployed throughout the world with overcrowding and poor hygiene and this obviously facilitated the transmission of the infection.

The City Council in Gibraltar came into being in 1921 and succeeded the Sanitary Commissioners who were appointed by His Excellency the Governor and were responsible for sanitation and health. The Medical Officer of Health (MOH) at the Colonial Hospital was a gentleman by the name of Colonel G. Dansey-Browning. He was very diligent in his record-keeping and communicated regularly with the Sanitary Commissioners reporting on the progress of the pandemic. He prepared and submitted annual reports on the health of Gibraltar.

The MOH reported an incubation period of 30-40 hours. He described very sudden onset of symptoms with cough, generalised aches and pains, fever, furred tongue, nosebleeds, diarrhoea and vomiting, the last especially in children. He describes hyperpyrexia (or very high fever) especially in cases of pneumonia with a rapid pulse. He himself recorded in a patient a temperature of 106.4 °F. (41.3 °C) and a colleague of his recorded a temperature of 108 °F. (42.2 °C). The MOH also noted that pneumonia was common, lobular in type and other sequelae included debility, anaemia, mental disturbances and confusion.

At the time infectious organisms smaller than bacteria were suspected as some diseases could be transmitted by filtering out bacteria but viruses were not seen until much later with the advent of the electron microscope. The cause of Spanish flu was attributed by many scientists to a bacterium called Pfeiffer’s bacillus, which is now known to have been Haemophilus Influenzae, a bacterium which nowadays may cause infections such as pneumonia. In actual fact this bacterium was isolated in many cases of influenza in Gibraltar and it was probably thought to have been the cause of influenza at the time. There are many different strains or types of influenza viruses and they are able to change or mutate. It is now known, of course, that the Spanish flu was caused by a H1N1 influenza virus A and many patients developed sometimes lethal pneumonia as a result of super-added infection by bacteria such as Haemophilus Influenzae or Streptococcus Pneumoniae. Transmission of the influenza virus was in air droplets especially whilst coughing and sneezing and this was probably strongly suspected then. The MOH was well aware of the importance of ventilation and isolation and he advised preventative measures (see below how the public were advised accordingly). He reported “isolation of patients, free ventilation, disinfection of clothing and bedding will give satisfactory results”. He further recommended that rigid segregation would be particularly effective.

The population of Gibraltar at the time was approximately 21,500 and this included 16,500 civilians plus 5,000 military. Numbers and statistics quoted in this article are in the main very approximate quite apart from the fact that some minor errors were noted but reasonable comparisons with other countries, for example, can be made. The first wave, of which there is less documentation than the second, appears to have started in Gibraltar in late May 1918 i.e. two months after the Kansas cases. It is reported in Gibraltar to have resulted in 600 cases but it is probable that 800 occurred with 29 deaths. Of these 19 were civilians, 1 naval and 1 military. The other 8 deaths were shipping or ‘bay’ cases. The MOH reports this wave as ‘benign’ with low mortality lasting 7-8 weeks and subsiding by the end of July 1918.

The second wave impacted Gibraltar much more forcefully, as it did worldwide. It started in September 1918, reached a maximum in October and died away in early December 1918. The MOH made the interesting observations that the second wave coincided with a drop in ambient temperatures, inclement weather and increased time spent indoors with deficient ventilation. At the height of the pandemic locally, he reported a total of 84 deaths from flu in the 3 weeks ending 20th Oct 1918. Of these 44 were landed from the bay, 28 were civilian, 3 naval, 8 military and 1 alien. The MOH recommended on 21st Oct that all indoor public entertainment should be suspended on account of the prevailing epidemic. He was supported by the Surgeon Rear-Admiral who referred to the danger of infection resulting from the indiscriminate kissing! There were approximately 500 cases for the week ending 22nd October and 700 cases for the week ending 29th October. Most cases were treated at home, of course, but with such a high number landed from the bay and many not seeking medical advice it is not easy to truly estimate incidence and prevalence of flu in the community. The MOH reported a total of 191 deaths in the second wave. Of these, 81 were civilian, 22 military, 9 naval and 79 were landed from the bay.

The following are photos of a poster and leaflet that were widely circulated in Gibraltar by the Sanitary Commissioners. The advice of good ventilation features prominently. Interestingly, an anti-flu vaccine was offered at the time and a handkerchief or screen was advised whilst coughing or sneezing. Gargling with permanganate was also advised as preventative.