The second of the big top four matches saw lasts season’s third placed St Joseph face current league champions Lincoln Red Imps in the second matchday of the season.
With both sides notching their first three points of the season in their first match and with both Bruno Magpies and Europa having met last week and dropping points after a 1-1 draw this was a chance for one of them to grab an initial early advantage if they could grab the three points.
The match was however, to end in deadlock with two goals apiece and sharing points with Europa who had drawn with Bruno the week earlier.
A dull Sunday afternoon did not in any way reduce the importance of the match for both clubs. The match was to see young referee Seth Galia given the
The match was to see Coleing return to guard Lincoln’s goal whilst Juampe was to get into their starting eleven.
It was also to see the first time St Joseph came face to face with some of the big name players who had departed their squad during the summer to join Lincoln Red Imps.
Both teams stood behind a breast cancer awareness banner before the match as football showed its support towards the campaign.
Lincoln made a strong start with Gonzalez Maroto whipping in a dangerous cross within the first minute which saw Robba having to collect dangerously by his goal line.
St Joseph’s responded with Aznar taking a shot from the edge of the box which went just over the crossbar.
Lincoln earned themselves a corner after a Liam Walker freekick over the defence was blocked by defenders as Lope attempted to out the ball back in. the corner whipped into the goal mouth ended with Lope at the far post seeing his header glide across goal with just five minutes of the match played.
Again it was a quick response by St Joseph who were at the other end and earning a freekick from the far right which was whipped in but Moeuhli’s header went wide off the mark and easily collected by Coleing.
The early frenetic pace was slowed down as both sides battled through the centre of the field trying to get some control of possession. St Joseph’s putting Lincoln under pressure and not allowing them to settle down in the early part of the first half.
Walker tested Robba on the eleventh minute from a disputed corner given to Lincoln. His cross seeing Robba forced to punch clear from just feet from his goal, his defence then clearing the danger.
Any doubts that St Joseph would not be challenging for the title were quickly dispelled with a disciplined, strong and confidence performance from early in the match. The saints frustrating the Red and blacks who found it difficult to settle into their play although starting to dominate possession as the first half wore on.
The match saw some interesting tussles among them St Joseph’s new signing Michael Yome and Lincoln Red Imps Ethan Britto, where the latter alternated with Morato in order to step forward on his runs down the left, keeping one back.
The first half hour of the match saw very little action in the direction of Juampe and Kike as St Joseph closed down well Lincoln through the middle.
It was Yome who broke the deadlock after a great build up starting from a release of the ball by Robba with Yome released to run forward with El Hmidi, another of St Joseph’s new signings, alongside. The latter feeding the ball back to Yome inside the penalty area, who send through a low drive past Coleing on the half hour to put St Joseph’s in the lead.
St Joseph’s patience in closing down Lincoln and building up forward paying off as they took the lead.
Lincoln responded by moving their lines forward which saw both Lope and Chipolina together at one point supporting the attack. They were nevertheless met by a disciplined reaction which kept Lincoln away from making an early attempt at goal.
St Joseph were forced to scramble away a dangerous corner kick from Liam Walker headed back into the goal mouth on the 38th minute as Lincoln maintained their momentum forward. St Joseph doing well to keep Lincoln from coming into range to goal and reducing their tempts to set pieces.
St Joseph showed that they were still dangerous as El Hmidi held the ball well on a counter and allowed St Joseph to spread the ball around well before Delgado put a ball dangerously across goal which just needed a tap which did not materialise. Saints using their lead well up to them to stay compact at the back and cause danger on the quick counter.
It was however, Kike, who had seen little of the ball in the first half, who provided Lincoln with a chance to equalise as he forced a foul from Mouehli after a quick turn outside the box. The freekick which was deflected to corner saw Liam Walker whip in a great ball which was struck back to goal by Torrilla. Although Robba was to get a hand to the ball he was unable to stop it going into the top corner as Lincoln Red Imps equalised on the stroke of half time.

Lincoln Red Imps buoyed by their equaliser late in the first half surprised St Joseph in the very first minute of the second half. Britto releasing Kike who from a tight angle beat Robba scoring Lincoln Red Imps second goal.
Rattled by the quick second half goal St Joseph were on the backfoot with Robba forced to make a great save as GONZALEZ Maroto smashed the ball goalward from a tight angle just moments after the goal.
St Joseph had their chance in response with Aznar seeing an attempt from outside the penalty area whizz past the goalpost to an outstretched Coleing just moments later.
The match went into a phase which saw end to end action. Kike was to claim for a penalty on the fiftieth minute as he fell to the ground under the tight marking from Mouehli the referee ignoring his claims.
Lincoln maintained their momentum but faced a St Joseph side looking to counter as they sought for the equaliser. El Hmdi was to prove difficult for Lincoln’s defence with his strong running creating some chances early on. On the 54th minute a run from deep inside his half saw him chased into Lincoln’s half before his final cross was dealt with comfortably by Lope.
Gonzalez Perez came close with a shot from distance just wide off the target on the 60th minute as St Joseph tried to get back in the game. New signing Zeukevoet coming on to bring a new dimension to their attack.
Lincoln Red Imps also made changes with Lee Casciaro coming in for Juampe who had not made the type of impact which many had expected.
Walker was to come close with a dipped shot from outside the penalty area on the 64th minute as the match went into a phase in which neither side seemed to dominate possession, although Lincoln were getting forward more.
A double substitution by St Joseph saw Kelvin Morgan and Kevagn Robba come on as the blues searched for new options.
Lincoln responded by removing Kike and Torrilla and bringing on Peña Garcia, a former St Joseph player and Yahaya.
St Joseph had a chance with GONZALEZ Perez’s freekick send wide by Delgado.’s header on the 68th minute.
St Joseph started to up the pressure on Lincoln Red Imps as they sought for a way for the equaliser. Pushing the Red and blacks into their own half for prolonged periods.
However, it was Lincoln Red Imps who came closest to another goal with a cheeky chip by Sergeant hitting the crossbar after St Joseph’s midfield had lost the ball cheaply through the middle on the 76th minute.
St Joseph coach Abraham Paz opted to bring on Pecci Macias for Mouehli as they arrived into the last ten official minutes of the match with St Joseph far from giving up and still searching for the equaliser.
Morgan came close on the 85th minute after a patient build up by St Joseph saw ball floated into the goal mouth. Morgan’s header going just wide over the bar as the player clutched his head knowing it had been an opportunity to equalise. Moments later Lope blocked a first time shot from inside the far end of the six yard box.
The subsequent corner saw a short pass play by St Joseph that allowed Barnett space at the top end of the penalty area to shoot low past Coleing for the equaliser with just one minute left on the clock.
Robba was to produce a great block under his post from a power drive to goal from Segeant which kept the score level. He was later lucky to escape without giving away a penalty after coming out to block a cross to Casciaro and colliding with the player without getting a touch to the ball.
Lincoln pressed to try and break the deadlock but were kept out by St Joseph.
With neither side able to break the deadlock in the final injury time minutes the match was to end with both sides sharing the points. For the second time in just two match days a clash between the top four finishing with a draw. The battle for the title seeing one of the tightest starts seen in recent seasons. 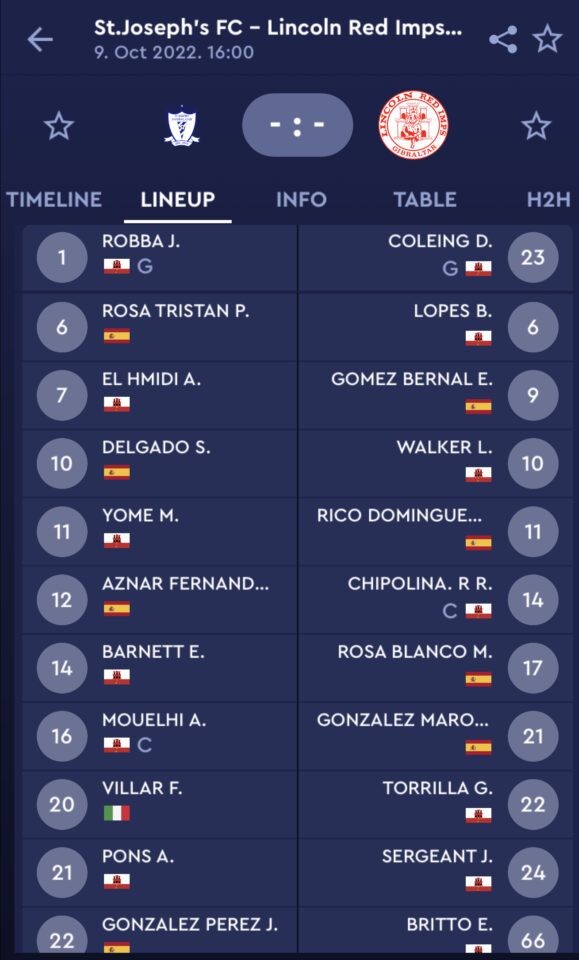 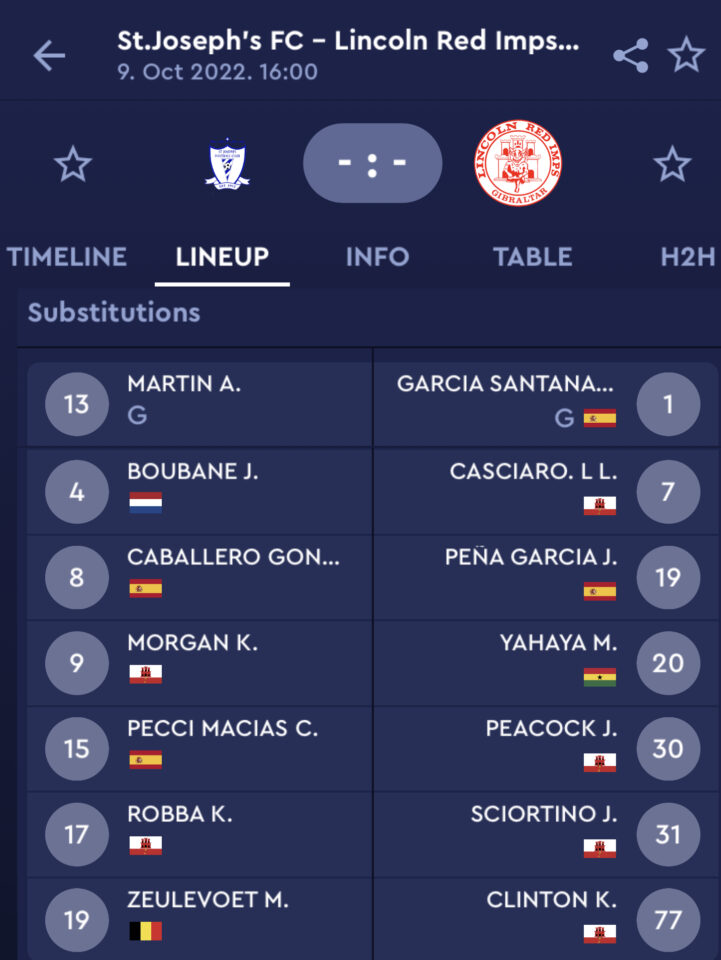 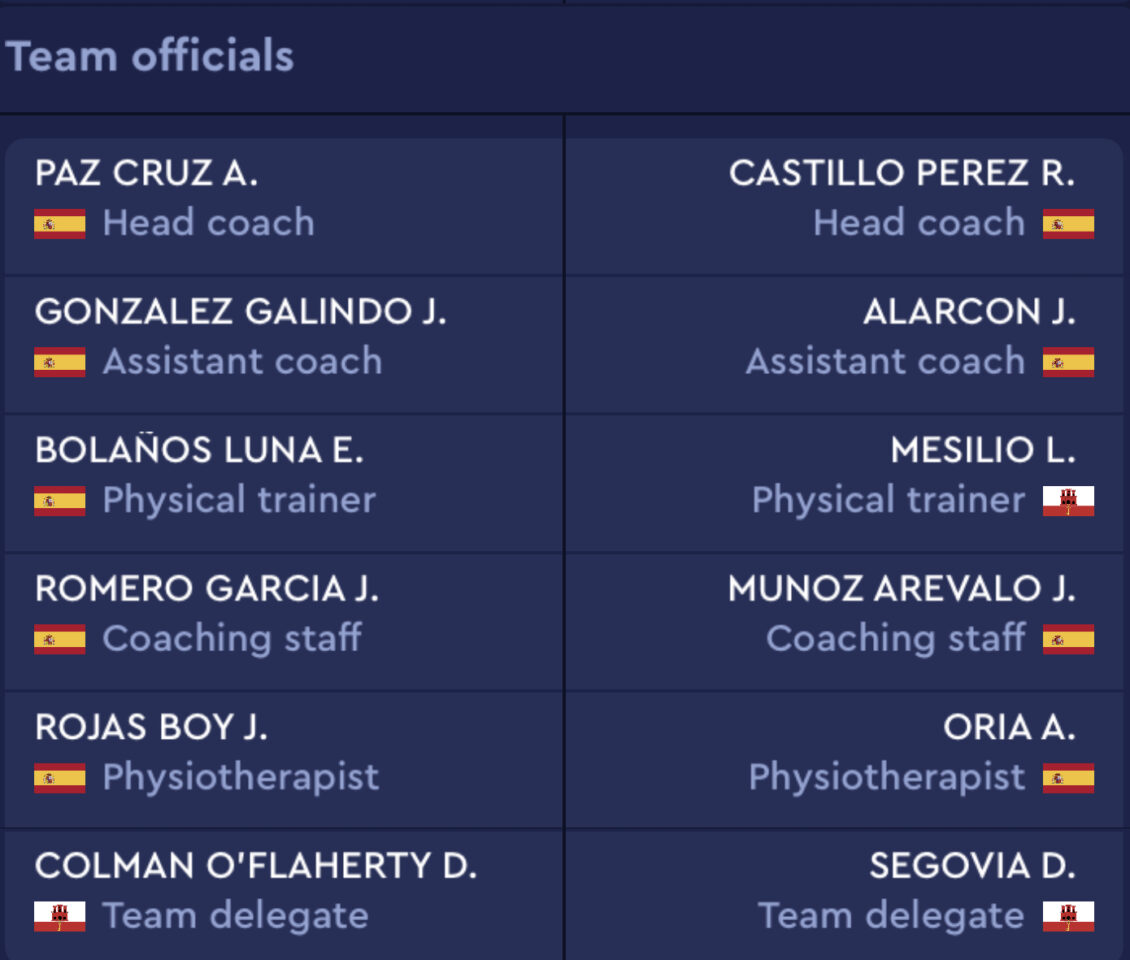 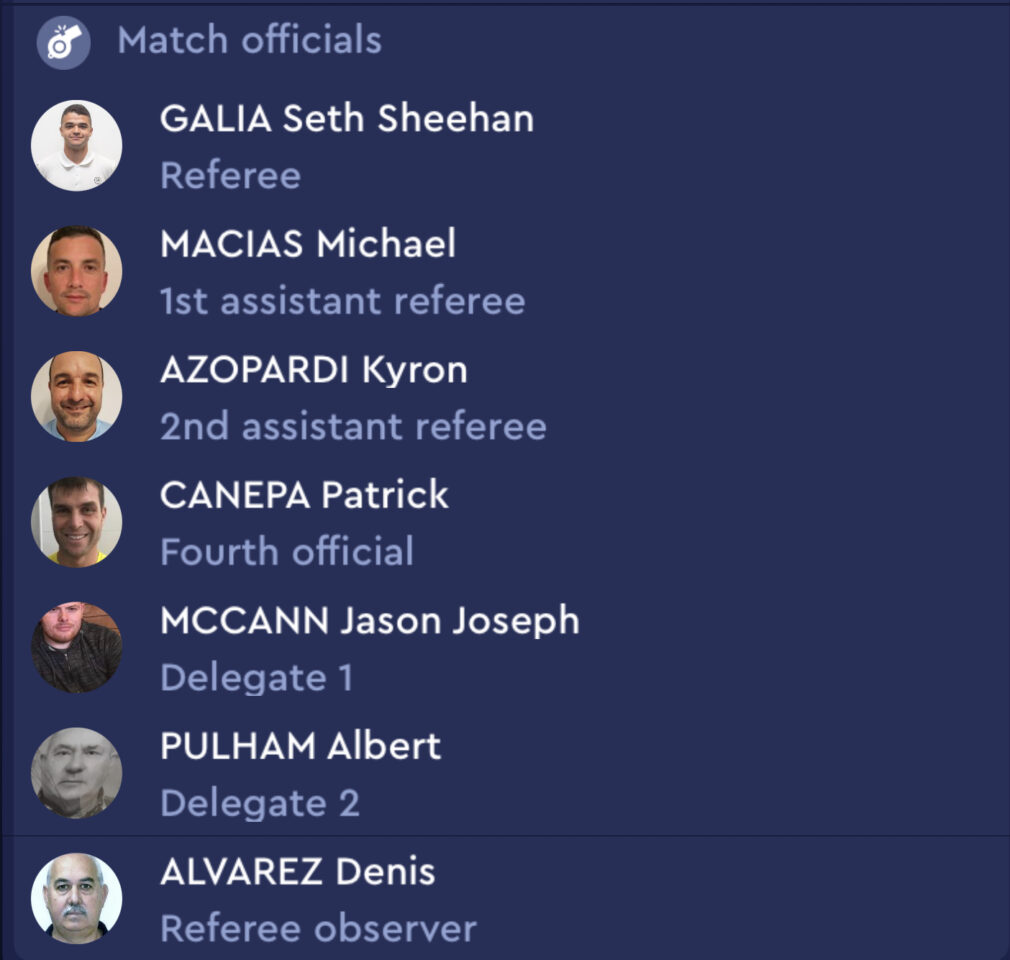 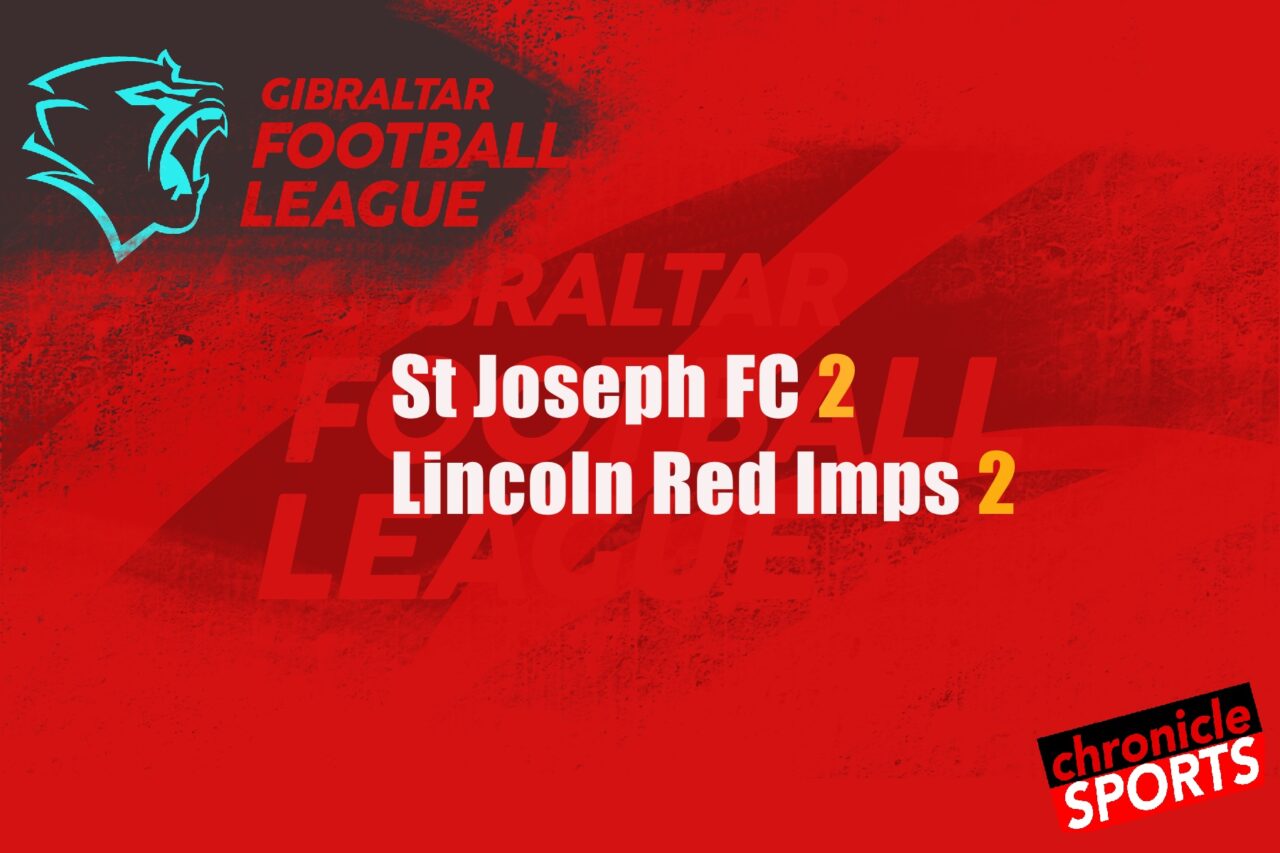