By Eleanor Crooks, PA
Great Britain’s proud golden run in the Olympic men’s four came to a disappointing end but a surprise silver in the men’s quadruple sculls lifted the gloom for British Rowing.

Britain had won gold in the four at the last five Olympics – a run started by Steve Redgrave, Matthew Pinsent, Tim Foster and James Cracknell in Sydney in 2000 – but the quartet of Oliver Cook, Matthew Rossiter, Rory Gibbs and Sholto Carnegie could only finish fourth.

They had looked set for silver behind Australia but the effort of chasing for gold cost them and they crashed into the Italian boat in a shambolic finish.

The disappointment followed fourth places in the men’s double sculls and the women’s four, but there was a significant silver lining in the very next race as Harry Leask, Angus Groom, Tom Barras and Jack Beaumont finished second in the quad.

By contrast to the four, it was Britain’s first Olympic medal in the event, and Beaumont said: “We’re hugely proud. We’ve worked so hard. We’ve been part of a rowing team that’s had huge success, a huge tradition of British rowing.

“But, in our sculling team, there’s a tradition of being in the shadows a little bit. We’ve built on years of hard, hard work and near misses and I’m so proud to get this silver medal. It’s the start of a new history, and that’s awesome.”

They led at halfway before being overtaken by the Dutch but held off the Australians and the Polish to clinch silver.

The emotions were, of course, very different for the men’s four, who were all too aware of the legacy they were trying to continue.

Rossiter said: “We tried our best but we really screwed up there at the finish so it’s a bit heartbreaking. There’s no sugarcoating it – we’re absolutely devastated.”

The four were well aware of the formidable history they were trying to continue and were disappointed with perceived negativity from some high profile former members of the boat.

Rossiter said: “It’s more just disappointing that those people will probably be really smug now that they are part of the legacy that won.”

The women’s four of Rowan McKellar, Hattie Taylor, Karen Bennett and Rebecca Shorten were not fancied to get a medal but came extremely close, finishing just over a second behind Ireland. 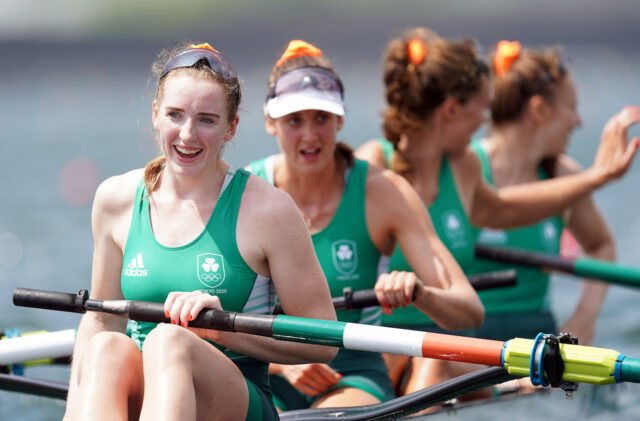 Bennett said: “We’ve not really been together for that long so we should be really proud of that performance, it’s just really frustrating and really gutting that that was fourth rather than third.”

Graeme Thomas and John Collins had set themselves the goal of finishing in the top three in the double sculls but were unable to overhaul the Chinese.

While this is clearly not going to be remembered as a great regatta for Britain, there are a number of medal chances left.

Helen Glover’s hopes of a third gold alongside Polly Swann in the women’s pair remain alive after they finished second behind Greece in an exciting semi-final.

Glover said: “I only had been rowing for a month or so a year ago. We feel we should be here as a crew, so it’s not a huge celebration. But, in another way, of course we are celebrating it as a story of how far we have come.

But it is also a story about how far we have to go. We are excited for the next 24 hours.”

And the lightweight double sculls team of Emily Craig and Imogen Grant looked hugely impressive in winning their semi-final in a world best time, while the men’s eight made it through the repechage.