Teams are working overnight in a race to offload a mix of oils from the OS 35 amid fears the beached ship could break up.

Chief Minister Fabian Picardo on Thursday said he was "extraordinarily concerned" about the potential environmental impact the beached cargo ship could have on coastlines if it continues to seep oil.

Mr Picardo said the Gibraltar Port Authority and other maritime authorities, including from Spain, had been working as safely and as quickly as possible to mitigate any impact on the environment.

The vents had previously been sealed, but those caps became loose after the hull “crumpled” under the strain.

Now the team is in a race against time to pump 250 tonnes of diesel fuel, 215 tonnes of low sulphur heavy fuel oil, and 27 tonnes of lube oil from the vessel.

As of 10pm on Thursday, 112 cubic metres of diesel were pumped out of the vessel, almost half of the load in the vessel’s diesel fuel tanks, by the salvage team.

The Government expects that most of the diesel will be pumped out by Friday morning as the advice received by the Captain of the Port suggests it will be possible to continue operations overnight.

A boom at Catalan Bay has now been installed to preserve the beach’s shoreline, which was provided by Ministry of Defence. 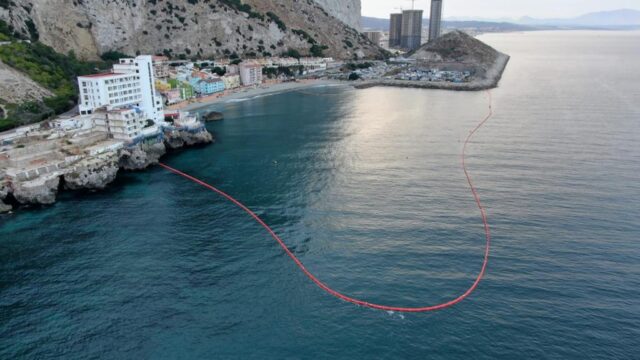 The Government said this will be helpful in proving extra protection to the area.

OS 35 has been beached in Catalan Bay since Tuesday, after a collision with the liquified natural gas carrier Adam LNG saw the vessel grounded and taking on water.

But as the days have drawn on, concern over the ship’s environmental impact has heightened.

At first the Gibraltar Port Authority (GPA) was seeking to repair the ship’s hull, but on Wednesday it "crumpled" and began to leak oil, which was contained but later seeped through the booms around the hull.

Now the focus is on minimising the environmental impact by pumping as much fuel as possible, and quickly, out of the ship before it potentially breaks up.

At the same time, tugs and support vessels are working to contain as much of the spill at sea and scoop it out.

"I am extraordinarily concerned," Mr Picardo told the Chronicle.

"I am really, really worried. At any moment this vessel could break up before we have been able to cleanly and safely take out the fuel.” 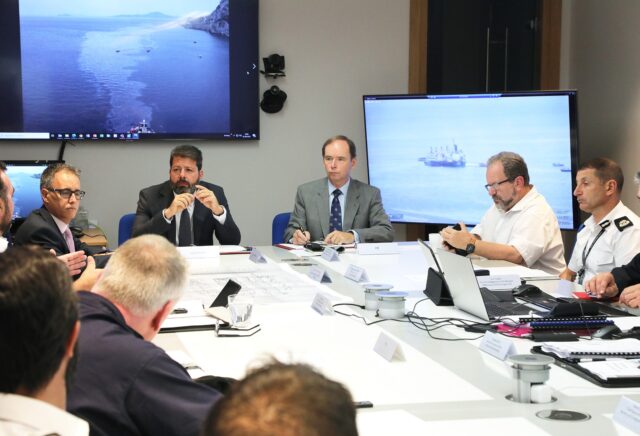 Mr Picardo added that the Minister for the Environment, as well as the Captain of the Port, were equally worried.

But he said it was wrong to claim the removal and containment operations could have been handled faster or more effectively.

"We are all very concerned and very tense about how we take this forward and have been very careful to make only decisions which protect our environment and our neighbour’s environment, so that we get this operation right,” he said.

"Nobody should think there are options to pump this oil quick or to boom the oil better that we are not taking and that anybody else would be able to take any quicker than we are taking them.”

“It's a fiction to believe that and it does us all as a community a disservice to pretend that."

An additional boom has been provided by the Ministry of Defense and has been deployed in Catalan Bay to protect the shoreline from the low sulphur fuel oil leak or any other potential leaks.

As a precautionary measure, booms have also been deployed to protect the salt-water intakes at Little Bay and prevent any potential risk to our water infrastructure.

At the time of the interview a report was pending from marine engineers on the severity of the damage to the ship’s hull, what possible further damage could occur, and solutions. 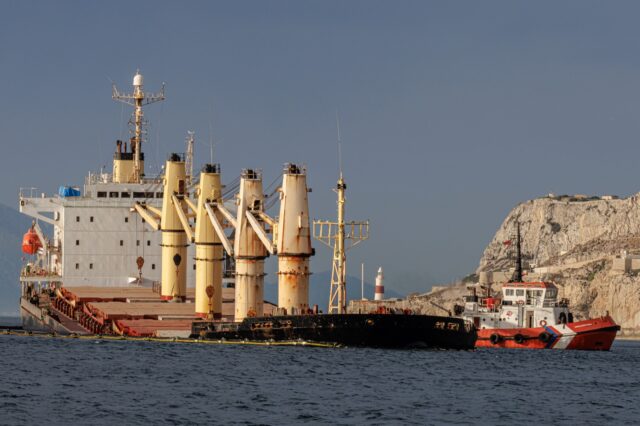 Initially, engineers expected the vessel could be removed from Catalan Bay within three weeks. Now it be expected this will "go on for much longer.”

But Mr Picardo is hopeful most pollutants on board will be pumped out in the coming days.

"Hopefully with all of its pollutants as substantially removed as possible, so in the event that things were to be aggravated by weather, although there would be a polluting effect, it would not be as great as it would be if it were to happen with the fuel tanks of this vessel full," Mr Picardo said. 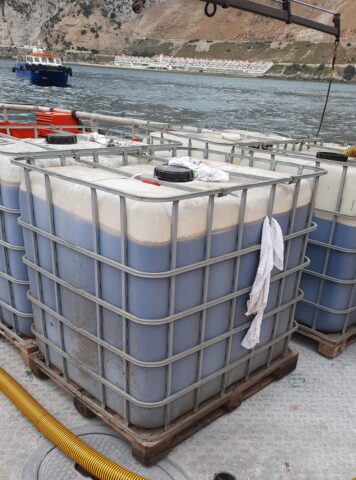 The Government confirmed that half of the amount of low sulphur fuel leaked on Thursday morning had been collected by booms and pumped into tanks on clean-up vessels.

There are currently three levels of containment working against the current with what are known as” J formation booms” at different points on the east side to corral the oil.

Analysis from Thursday showed that although this has been a significant leak, the consistency of the low sulphur fuel oil is lighter than during other incidents which have occurred in the Bay. 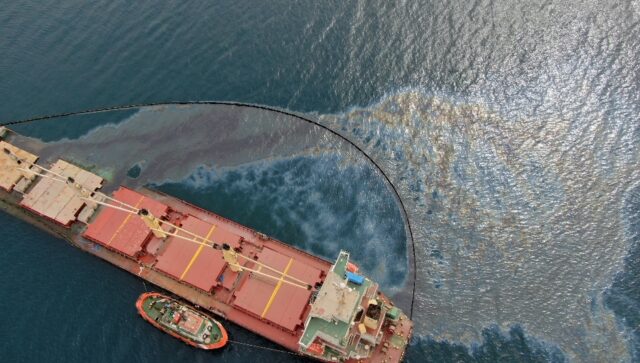 The Government said this means it should be easier to dissipate and clean if any of the fuel oil reaches Gibraltar’s shorelines.

The main concern is focused on the heavy fuel oil used by the vessel’s engines.

"Diesel fuel is very polluting if it were to escape but is not as polluting as heavy low sulphur fuel that is also onboard the vessel which is harder to pump," Mr Picardo said.

"We're now pumping the diesel fuel, we'll try next to pump the low sulphur heavy fuel, and then to pump the lube."

“I know that some people have said we should be pumping the oil out sooner, we should be doing more to restrict the oil from escaping the boom if it has leaked." 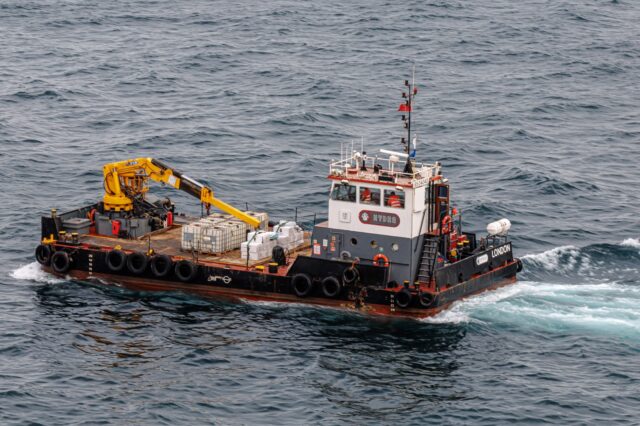 "Let me assure you there are no resources in Gibraltar or within any reasonable proximity in Gibraltar that have not been deployed in the shortest time possible in order to be able to pump that oil as soon as safely and cleanly possible and to contain it as soon as cleanly as possible."

"It's all very well to say you should've boomed more, but moving a boom and placing a boom and it being an appropriate boom is easier said than done.”

Mr Picardo called it a "fiction" that more resources could have been brought to bear to stop the pollution, adding that informed commentary has sided with the Government's decision to beach the vessel and pump oil.

Raquel Sanchez, Spain’s Minister for Transport, told Spain’s TVE1 that Spain had been “cooperating closely” with Gibraltar’s authorities “from the outset” and had made available “all assets” in the area, as well as activating others further afield should they be needed in the coming days. 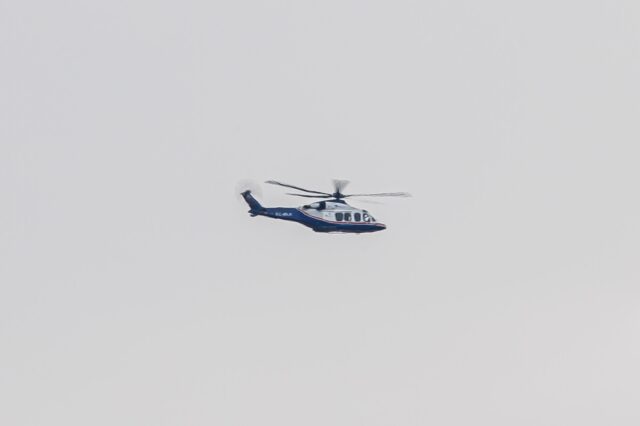 Drone images captured the extent of the leak on Thursday afternoon, with oil spilling outside of the booms. 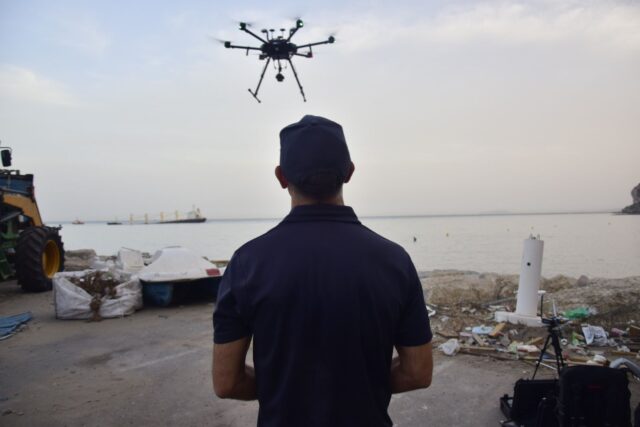 Mr Picardo said the images were "more dramatic" than the reality, adding that the response from the GPA showed it was able to deal with the immediate concerns that arise in respect of risk to life to mariners, where a ship is "in effect unseaworthy.”

"Unfortunately we have seen a small amount of heavy fuel oil that has leaked from the vessel because of the extraordinary circumstances of the crumpling of the hull," Mr Picardo said.

Mr Picardo said the Gibraltar's response has been "very, very good," and there will be lessons learned to ensure it's "even better next time.”

On Thursday evening Gibraltar Contingency Council convened again at No.6 Convent Place, where the Captain of the Port, John Ghio, updated the group, chaired by the Chief Minister Fabian Picardo, and the Governor, Vice Admiral Sir David Steel, on any developments.

The Department of the Environment is asking the general public to be vigilant and report any sightings of species in distress by calling tel: 58009620.