By Nilima Marshall
Bones belonging to two "teenage" Tyrannosaurus Rex dinosaurs provide fresh clues as to how these predators grew up to become "plodding, crushing monsters", according to a new study.

The fossil skeletons indicate the juvenile T. Rex dinosaurs were slender, fleet-footed and had knife-like teeth for cutting food, unlike their lumbering, bone-crushing adult counterparts.

It was previously believed that the bones, which are preserved at the Burpee Museum of Natural History in Illinois, US, belonged to a different dinosaur species, a smaller pygmy relative known as Nanotyrannus.

But an examination of the tissue microstructures within the bones revealed they were part of the T. Rex family. 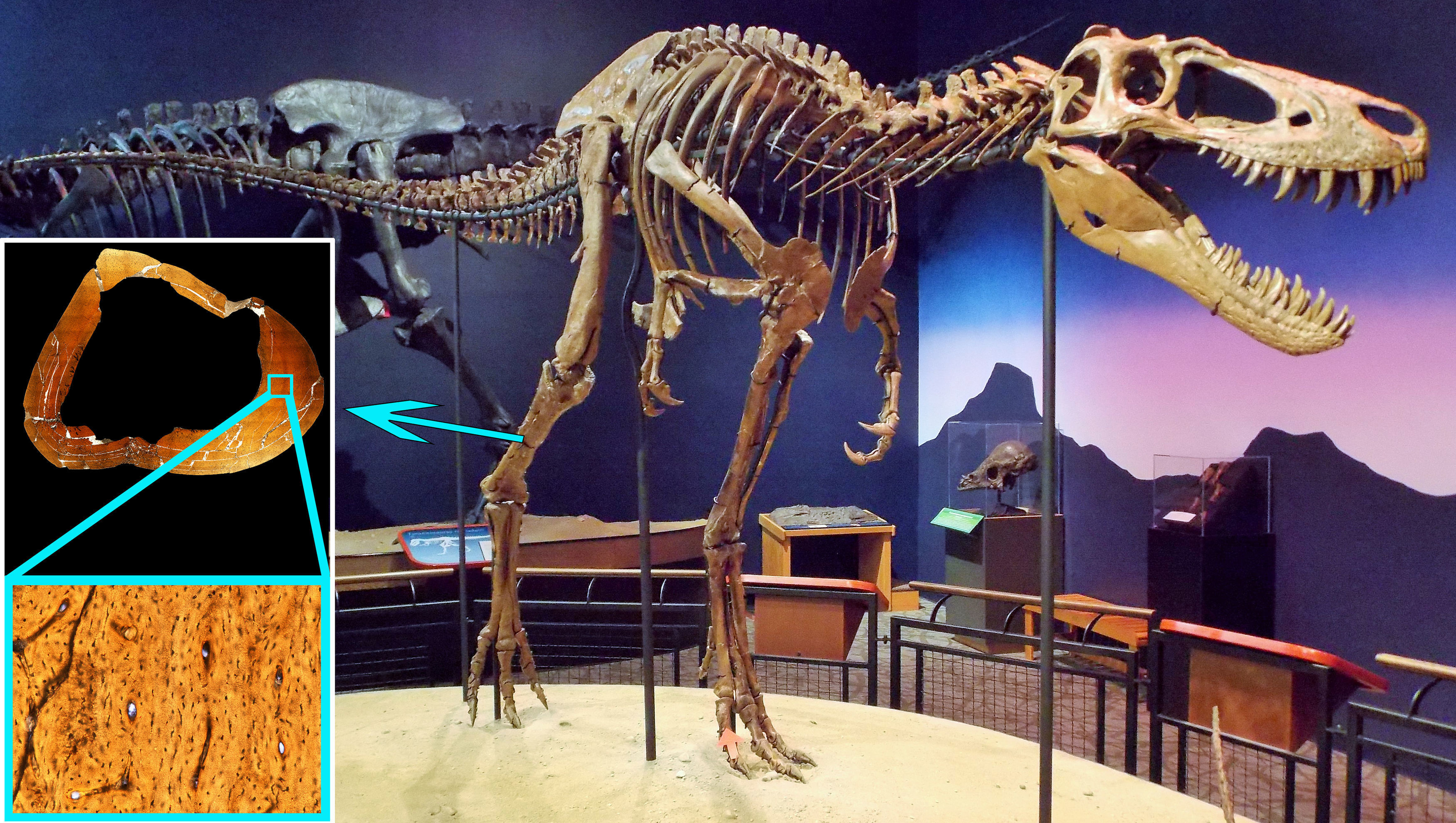 Dr Holly Woodward, an associate professor of anatomy at the Oklahoma State University Centre for Health Sciences and lead author on the study, said: "Historically, many museums would collect the biggest, most impressive fossils of a dinosaur species for display and ignore the others.

"The problem is that those smaller fossils may be from younger animals.

"So, for a long while we've had large gaps in our understanding of how dinosaurs grew up, and T. Rex is no exception."

According to the researchers, the juvenile tyrannosaurs would have been "slightly taller than a draft horse and twice as long" and were yet to experience a major growth spurt at the time of their death. 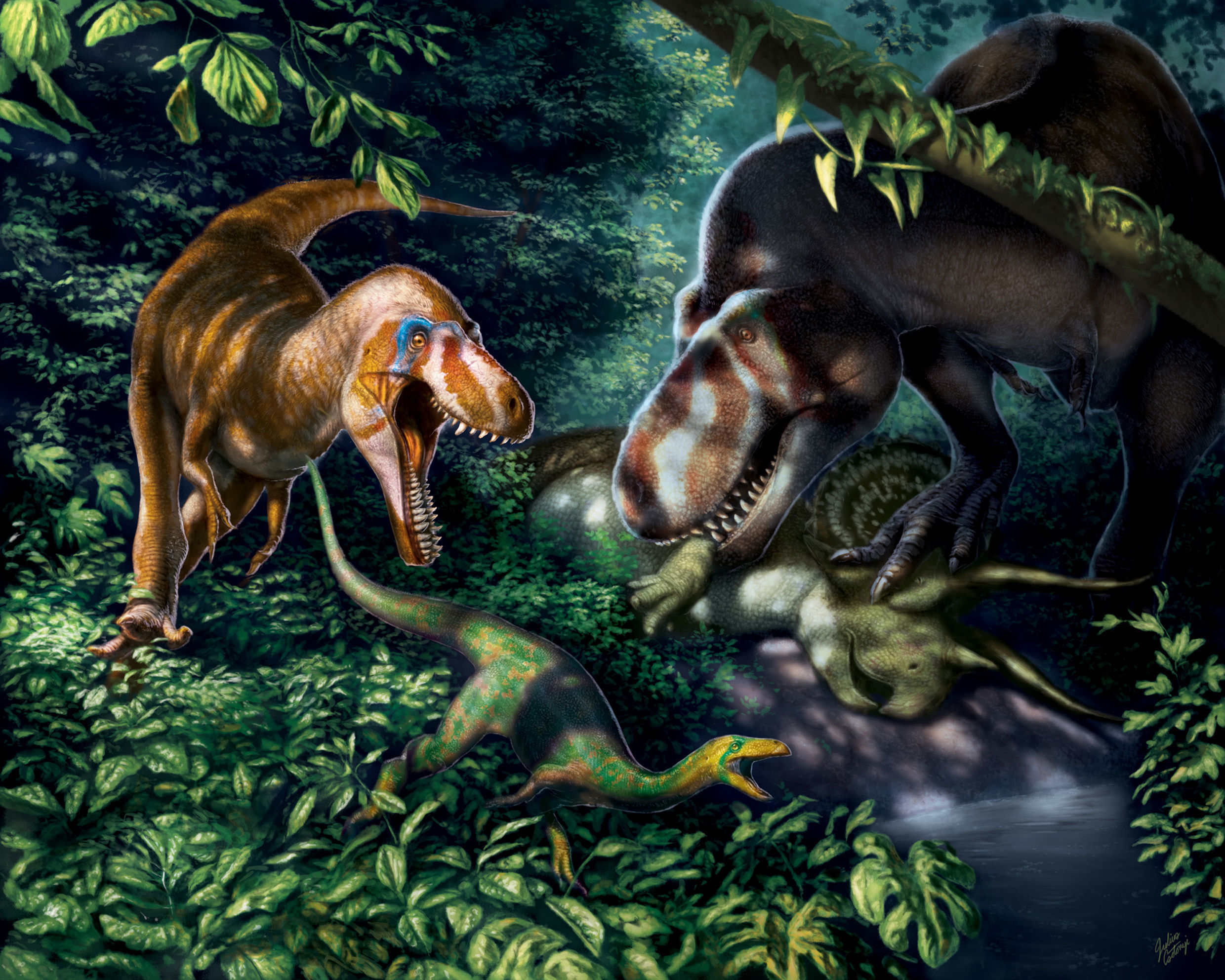 Adult T. rex, on the other hand, would have been around 40ft long and 15ft to 20ft tall, making them one of the largest meat-eating dinosaurs that ever lived.

Scott Williams, a palaeontology lab and field specialist at Museum of the Rockies in Montana, US, and study co-author, said their findings show these dinosaurs "go through a drastic change when they grow up from these sleek, slender, fleet-footed T. Rexes with these wonderful knife-like teeth to these big, monster, plodding, crushing tyrannosaurs that we are familiar with.

"It also tells us these animals probably dominated their ecosystems at all ages."

To assess the age and growth rate of the T. rex specimens, nicknamed "Jane" and "Petey", the researchers removed thin slices from the leg bones and examined them at high magnification. 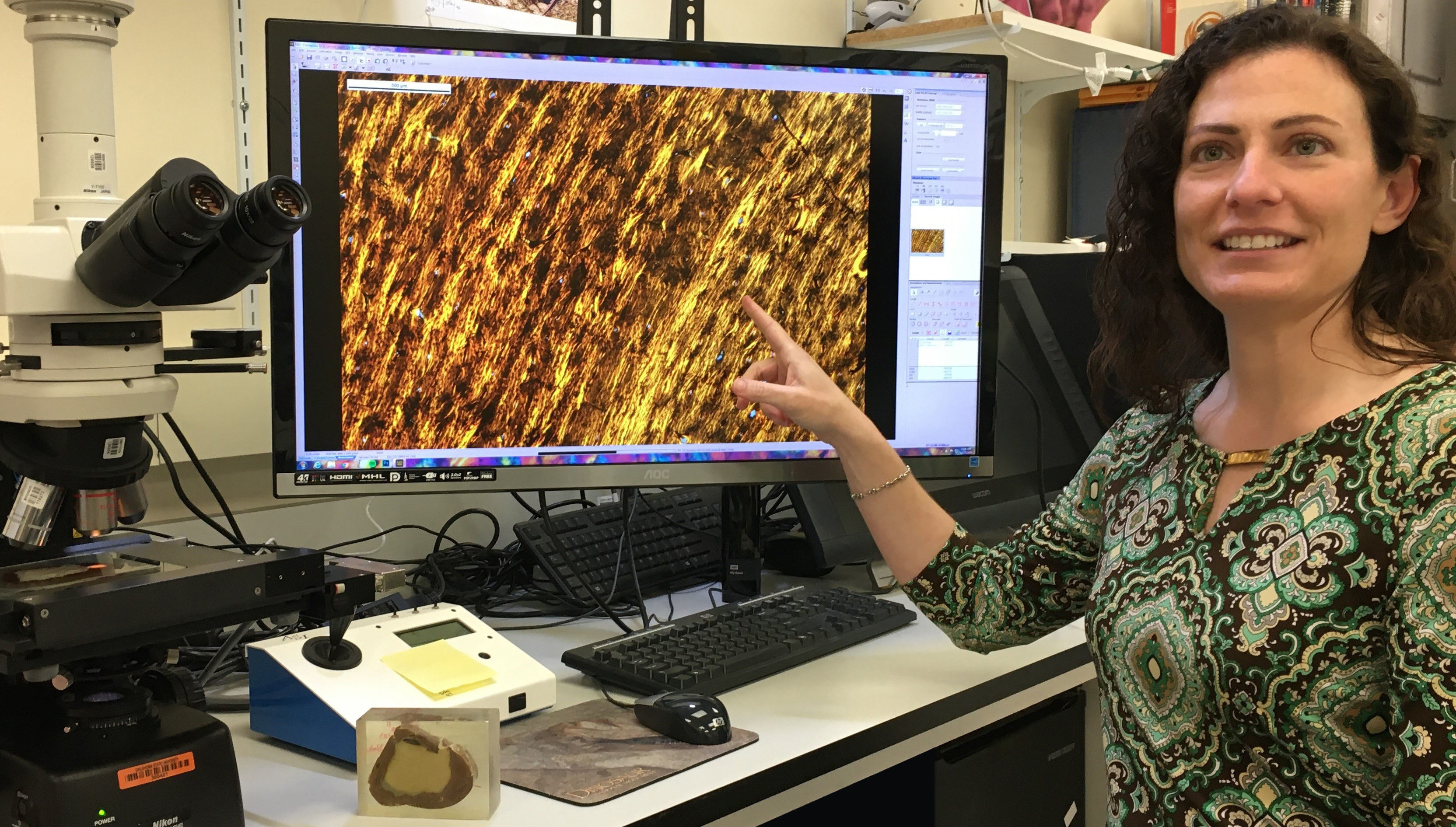 They found that by counting the annual rings within the bone, much like counting tree rings, Jane and Petey were teenagers when they died, aged 13 and 15, respectively.

Based on their analysis of the bones, the researchers believe it took the T. rex up to 20 years to reach adult size, undergoing drastic changes as it matured.

And based on the spacing in the rings, the team believe the T. rex's growth was dependent on its food source.

For instance, if food was plentiful, the dinosaurs would bulk up and if food was scarce, it would not grow as much.

Dr Woodward said: "The spacing between annual growth rings record how much an individual grows from one year to the next.

"The spacing between the rings within Jane, Petey, and even older individuals is inconsistent - some years the spacing is close together, and other years it's spread apart."

The findings are published in the journal Science Advances.
(PA)

Scientists believe that as dinosaurs decreased in size over millions of years they developed to have higher metabolism.

This evolutionary process allowed the creatures to burn energy from food at a faster rate and regulate their own body temperature. 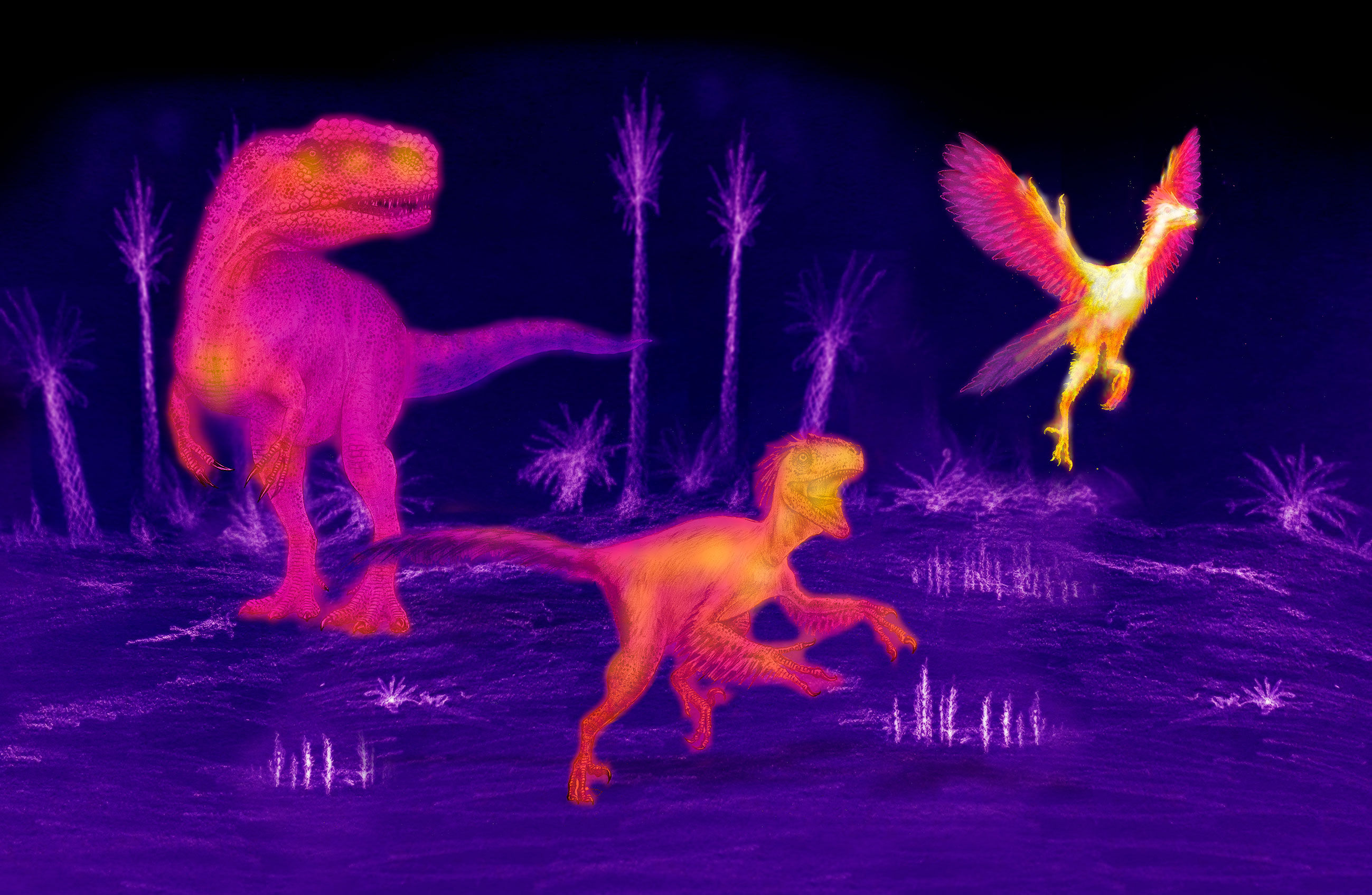 The researchers, from the University of Chile, say their findings may also explain how mammals became warm-blooded, giving them the capability to generate heat by metabolic means.

Warm blooded animals, or endotherms, need a lot of energy compared to cold blooded creatures - such reptiles, fish and amphibians - who rely on environmental heat sources.

But the researchers say there are many benefits to being warm-blooded, which include being able to live in a wider geographic range as well as having greater mobility, brain power, stamina and tolerance to harsher conditions.

Over the years, scientists have struggled to understand the origins of endothermy, mainly due to the lack of fossil evidence.

To find out more about the evolution of warm-bloodedness, lead author Enrico Rezende and his team used a popular biologists' model for heat regulation known as the Scholander-Irving model.

According to this model, warm-blooded birds and mammals must balance their metabolic heat production with their heat loss to the environment in order to stay comfortable. 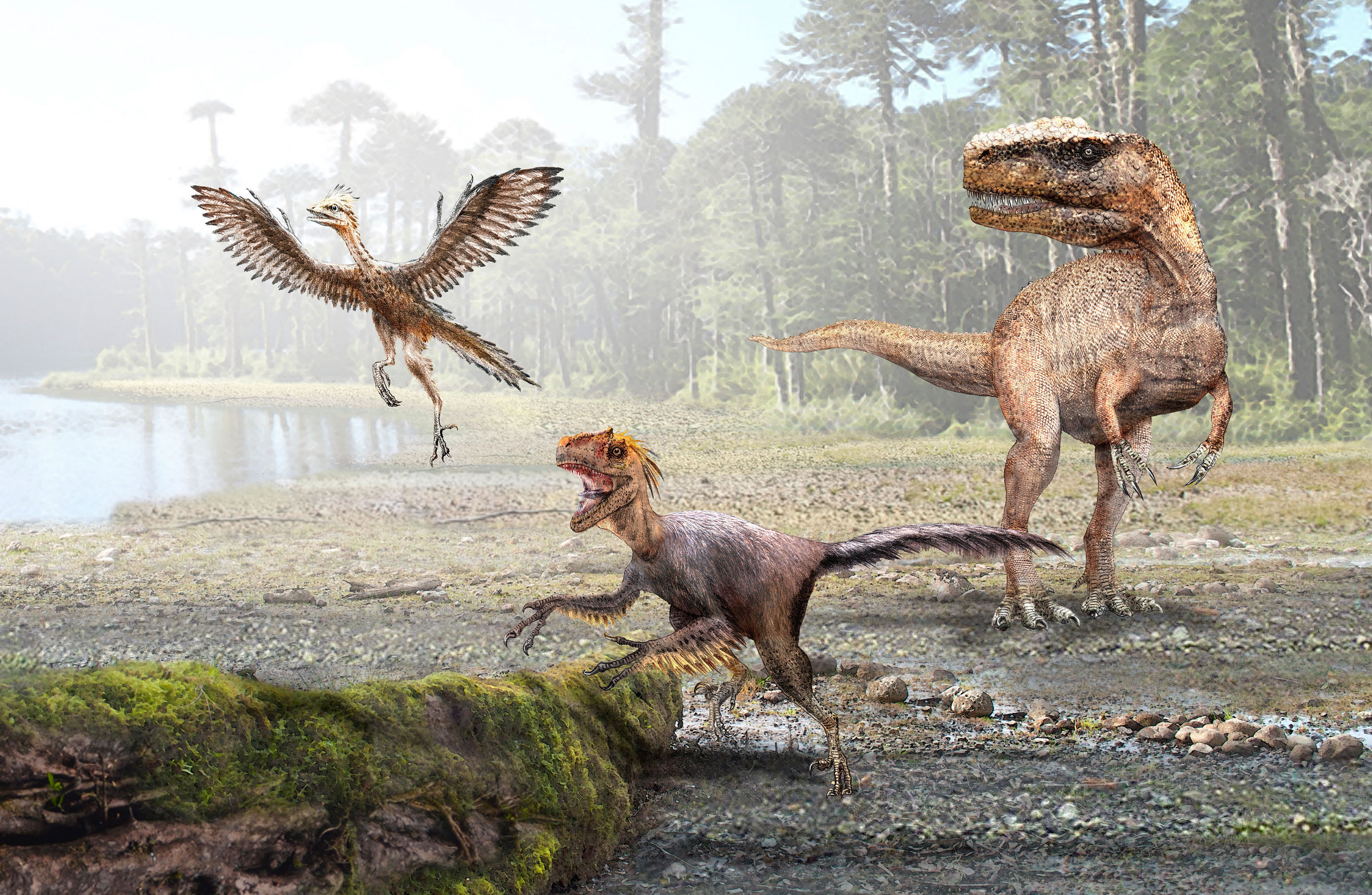 The team combined the Scholander-Irving model with different body sizes of theropods - a group of two-legged, three-toed dinosaurs from which all birds evolved.

Their findings suggest metabolic rates rose steadily throughout most of the Early to Middle Jurassic period, around 180 to 170 million years ago.

For instance, a 43kg modern-day bird would have the same energy requirements as its 370kg dinosaur ancestor.

The researchers conclude that their smaller sizes and higher energy turnover rates ultimately favoured the theropod lineage, with simulations showing a 30-fold increase in population as endothermy evolved.

Writing in the journal Science Advances, the authors noted: "Results suggest that a reduction in size constitutes the path of least resistance for endothermy to evolve, maximising thermal niche expansion while obviating the costs of elevated energy requirements."
(PA)