The Calpe Conference 2020: A personal view Part One

By Dr Alex Menez
This year’s Calpe Conference was unlike any of the 23 that came before. There was no hustle and bustle of people making their way to the registration table to collect their conference packs.

No enthusiastic audience migrating into the conference room to secure the best seats. No shaking of hands, or fleeting kisses on cheeks with old friends and colleagues. The conference was originally planned to have explored the theme of digital photography and its uses in science.

Both local and external speakers were to deliver lectures about their research and techniques in this area. But the black cloud that is Covid-19 put paid to that. It has impacted upon so many activities and pursuits that we have all taken for granted for so many years. As well as how and where we undertake them.

Scientists, however, are aware that adaptation is an important process in nature. A recent paper assessing behavioural adaptation to rapid change in the journal Evolutionary Applications, notes that behaviour mediates interactions between individuals and environment. And that the ability of organisms to behave appropriately under these new conditions is crucial for determining their immediate success or failure in these modified environments.

We transplanted this tenet to this year’s Calpe. Our audience was ex situ; the presentations made available live-streamed online. The theme for the conference was changed; all speakers were Gibraltar-based; Government regulations regarding public health were strictly adhered to; masks were worn (except for seated speakers during delivery of presentations). Due to the planning and work of many, it is positive and uplifting that our annual conference went ahead.

The conference, titled ‘Natural History of Gibraltar: past, present, and future’, was held at the University of Gibraltar and ran from Thursday the 15th to Saturday the 17th of October. In her welcoming address, Vice-Chancellor of the university, Professor Catherine Bachleda, mentioned that as a result of the Covid-19 pandemic “there’s no getting away from the fact that this year’s [conference] has been unlike any other”. She highlighted issues including global habitat and ecosystem loss, climate change, and species extinctions as “threats to our own survival”, adding that research in these areas is “so important”. She then introduced Professor John Cortes, Minister for Education, Heritage, the Environment, and Climate Change, who inaugurated the conference.

Minister Cortes identified five things that have shaped Gibraltar’s natural history: “Location, Limestone, Sea, Climate, and History”. Capturing the topically of Covid-19, associated restrictions and measures, and the theme of the conference, he explained that: “As Minister for Public Health I have had to be more involved than many in charting this course, and I acknowledge that on occasions it has been a strain. One of the ways that I’ve been able to cope with this is by taking maybe 10 to 15 minutes on my way home and stopping at some quite place, maybe near Europa Point, or Europa Advance, or the Upper Rock; and sitting quietly looking out at nature. Just by keeping an eye on what plant is flowering, what insect is buzzing, or what bird is soaring, I have been able to reboot my brain and get home at least a little refreshed.” Then something that resonated with all naturalists: “Despite my spending, as most of you know, the whole of my life being aware and in contact with nature, it is over the last six months that its importance to my mental health has become more evident than ever.”

The first speaker certainly subscribes to the Minister’s recipe of “contact with nature”. Leslie Linares from the Gibraltar Ornithological and Natural History Society (GONHS) has wandered over almost every square metre of the Rock during his near 50 years of botanical explorations. Leslie described how Gibraltar’s vegetation has undergone many changes over the centuries. Photos and paintings from the past, in comparison to recent photos, powerfully displayed these changes. He noted that 678 species of plants have been recorded to date, of which 82 are introduced.

He explained how habitat management can improve the diversity of plants, for example orchids; and how introduced exotics can have detrimental effects, including local extinction, of native species. He reported that of the total of the 678 species recorded, 109 have not been seen in the last 10 years. 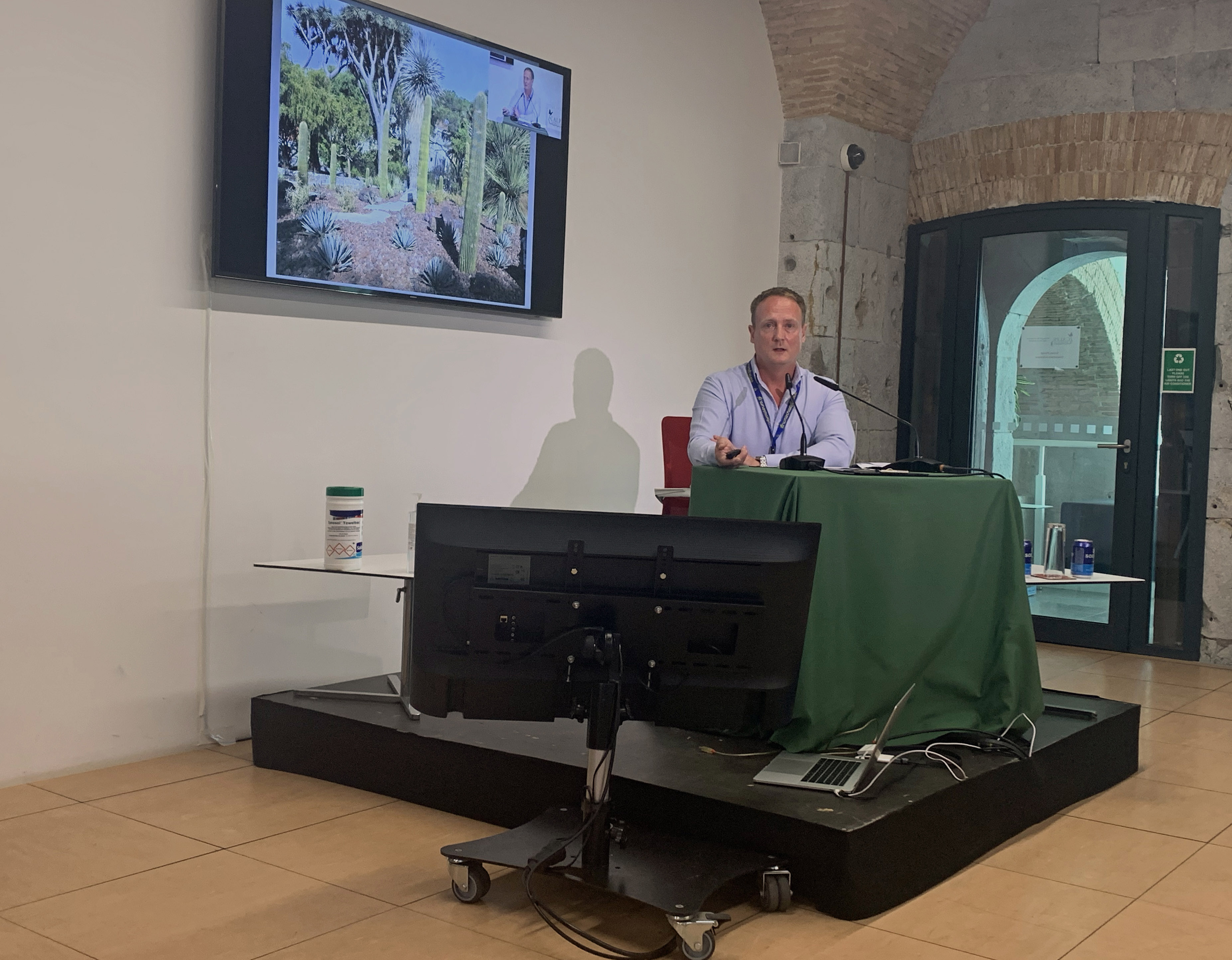 Next on was Andrew Gdaniec from the Gibraltar Botanic Gardens (GBG) and University of Reading. Andrew is a specialist on succulent plants and leads the Gardens’ succulent plant programme. A visit to the Gardens will demonstrate the astonishing collection there, as well as Andrew’s amazing horticultural handiwork. He noted that cacti are one of the few major groups that have been surveyed for their conservation status and described a whole range of the threats they face, including over-grazing, soil erosion, decrease of pollinators, and climate change.

Because of these threats, he explained that “it becomes increasingly important to establish ex situ refuges for these plants”, with the view to reintroduction to nature if possible. This is one of the measures being undertaken at the GBG, although this is something, he noted, that should also be undertaken in the countries of plant origin. Andrew has conducted extensive fieldwork throughout the Americas and Caribbean and showed a selection of photos from some of the sites he has studied.

Additional expertise and experience have been brought to the GBG by Nigel Taylor, previously Curator at the Royal Botanic Gardens, Kew; then Director at the Singapore Botanic Gardens (SBG). Nigel, now at the GBG, described his input in developing Kew’s UNESCO World Heritage bid, then SBG’s World Heritage bid. He provided an in-depth historical account of the SBG highlighting “its history as a colonial botanic garden, its influence on the early economy of Singapore and SE Asia, its social history for Singapore’s residents over the last 160 years [and] its scientific contribution to the biodiversity of SE Asia”. SBG has become famous for breeding orchids, Nigel noting that, fascinatingly, it became a tradition to name new types after VIPs, adding that “we now have names [of orchids] for over 250 visiting Heads of State!”.

Thanks to Geraldine Finlayson from the Gibraltar National Museum, Liverpool John Moores University, and the University of Gibraltar, there was to be a dedicated presentation on digital photography after all. Photography has been used in scientific research almost from its very beginnings. Geraldine explained that digital technology opened the accessibility and potential for photography in many areas of research and has “revolutionized the possibilities of data collection for nature studies in the field”.

In many cases, digital photography provides an alternative to the collection of live specimens for museums, especially for rare and endangered species.

The next speaker was Rhian Guillem from GONHS, GBG, and the University of Gibraltar who shared some of her research on ants, a fascinating group of insects, and “the leading predators of other insects and small invertebrates”. There are more than 16,000 described species, with 59 species recorded from Gibraltar. As a part of her research, she examined previous records and museum collections, providing a history of myrmecology in Gibraltar and an update about what we know about Gibraltar’s ants, noting that more work is required on taxonomy.

Rhian described their life histories and ecology and discussed “invasives and the potential damage they can cause”.

The final day’s lecture was also entomological. Keith Bensusan from GONHS, GBG, and the University of Gibraltar provided a history of entomological research in Gibraltar and the surrounds, describing on-going work. An important component of that work includes the compilation of a reference collection of insects that is integral to taxonomic and diversity studies. He explained the “importance of different areas in Gibraltar for insects” and used a series of photos to describe a selection of ‘flagship’ insects, highlighting insect diversity and habitats.

In common with many other groups, habitat loss and decrease in plant diversity were identified as conservation issues needing attention. The first day finished with two topics for discussion that emerged from lectures: “The ethics of collecting”, and “Taxonomy: genetics and morphology”.

Part two and three of this series will be published in Wednesday’s and Thursday’s editions respectively.