By Dr Alex Menez
The final day began with a captivating lecture by Professor Joaquín Rodríguez Vidal centred on the geological habitat of the Neanderthals in southern Iberia. Oceanic conditions in Iberia have produced climates that are consistently milder than in other areas of continental Europe and “sea currents created more productive conditions for marine resources along the Atlantic coasts during the last glacial cycle than in the Mediterranean, and more accessible coasts than in northwest Europe.”

The region is located at a latitude and geographical environment similar to southwest Africa which, he noted, “appears to have been an equally favourable region for human settlement during the Pleistocene.” It is not surprising, he said, that “Gibraltar and south Iberian coastal territories, such as Doñana, represented a refuge area during the cold stages of the Pleistocene.” It also seems predictable that “the progressive extinction of Neanderthals followed a clear direction from continental to oceanic, ending in the coastal belt of southern Iberia.” 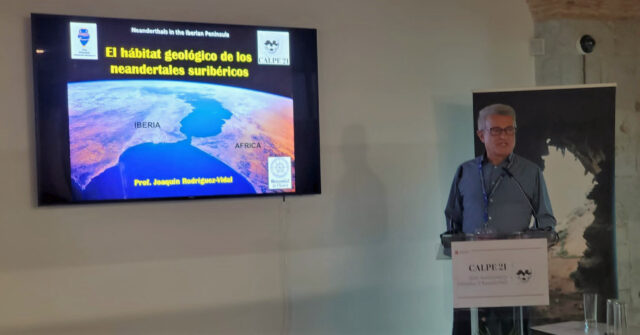 When we think of fossils we usually have in mind the preserved remains of animals or plants such as bones, shells or petrified wood. Carlos Neto de Carvalho from the University of Lisbon spoke about other types of fossils. A palaeontologist, he has a special interest in ichnology, the study of fossilized tracks, trails, burrows, and other trace fossils that “can be powerful tools in the evolutionary palaeoecology of many animal groups.”

Subsistence strategies including the colonization of new habitats and diversification of food resources leave traces in the stratigraphical record such as shell beads and shell middens. Human trace fossils, he said, “provide dynamic insights into human evolution, from the acquisition of obligate bipedalism to social and ecological interactions.” Carlos spoke about the largest Neanderthal ichnological assemblage to date: footprints in Le Rozel, Brittany which provided the demographic composition and size of a group living in the beach dune system. Other cases included the footprint of a young child together with tracks of large mammals; hominin tracksites between Aljezur, Portugal, and Matalascañas, Huelva; and “important fossils of Neanderthal activities in Gibraltar.”

Next on was Dr Stewart Finlayson of the Gibraltar National Museum who has extensively researched the relationship between Neanderthals and birds and the exploitation of these by Neanderthals. He is also working on birds as climate indicators using data of fossil material from across Europe. For many decades, the prevalent position in the literature has been that Neanderthals were incapable of catching birds which “has been used to support models of superior human cognitive capacity. Given recent published results showing Neanderthal exploitation of birds, a reassessment is necessary.”

Stewart used a comprehensive dataset of Neanderthal sites and associated birds during the Late Pleistocene that included behavioural and ecological factors. “Bird roosts which appear commonly associated with Neanderthal sites” were also considered to determine if they showed features that would allow harvesting. Some groups of birds were more frequent than others at sites, including corvids, game birds, ducks, and pigeons. There is evidence that Neanderthals processed birds for consumption and other uses and “they exhibited skills and abilities capable of despatching a wide range of birds and they were selective in the species that they took.”

In his lecture titled “Neanderthals as fishermen? An appraisal of the evidence,” Professor Arturo Morales from the Universidad Autónoma, Madrid noted that the “prevalence of large game found in association with Middle Palaeolithic tools has traditionally biased our ideas of Neanderthal subsistence practices.” A review of fish remains from 11 Middle Palaeolithic fish bone assemblages from sites in Belgium, France, and Spain was undertaken to determine whether Neanderthals fished and if so “whether fishing was a casual, opportunistic activity or a systematic practice.”

Fish remains were quantified, body mass and lengths estimated, and the spatial distributions of the remains determined; taphonomic analyses and inference of the season of death were also considered. Arturo reported that the evidence so far “points essentially to circumstantial fishing by Neanderthals” and the question “must necessarily remain open.” He conceded, however, that “some of the evidence, in particular the presence of large, greater than 1kg, fish in anthropogenic deposits and the absence of animal digestive traces and gnawing marks on fish bones in such deposits, seems compelling and suggests that Neanderthals could have played a role in the accumulation of some of these remains.”

Professor Geraldine Finlayson from the Gibraltar National Museum provided a reassessment of the Neanderthal diet. The subject has suffered from a misunderstanding of Neanderthal ecology, “in particular the inappropriate application of optimal foraging theory,” along with other factors. Assessing the evidence from the caves in Gibraltar, Geraldine noted that 79 plant taxa, 161 species of birds, 36 species of mammals, along with tortoises, terrapins, snakes, and lizards had been found in the fossil record, indicating rich ecological diversity. She said that “We have taphonomic evidence from the caves by way of cut marks on the bones and this allows us to infer what the Neanderthals were consuming, and it is clear they were taking large terrestrial herbivorous mammals, there’s a good species composition of terrestrial mammalian taxa such as Ibex, Red Deer, and Boar.”

They were not only focused on terrestrial mammals but “also exploited marine mammals such as the Monk Seal.” The evidence points to a much wider diet than many have suggested and said “that Neanderthals exploited a large range of foods that included large mammals, small mammals and birds, tortoises, marine mammals, molluscs and fish, and plants” and then concluded by saying that she could not sum up all this in any better way than by using Professor Ofer Bar-Josef’s own words: “You eat what is there.”

The final lecture of the day, and the Calpe Conference, was by Professor Clive Finlayson. You can always rely on Clive’s lectures to be informative and thought-provoking. Some are also controversial and provide ‘wake up calls’ that challenge current consensus in various research areas. The latter always engender significant discussion. One of the approaches of the researchers from the Gibraltar National Museum as regards the understanding of Neanderthals, their behaviour and environments, has always been to apply natural history and ecology, which I have elsewhere called ‘The Gibraltar School’ approach. It makes sense because after all, no animal, including Homo neanderthalensis, is exempt from the effects of ecological patterns and processes. We need more biology in archaeology and palaeoanthroplogy.

Clive described the environmental diversity of Iberia, which is often portrayed by students of human evolution as a “singular, amorphous, geographic unit” and which is “anathema to the ecologist and the biogeographer, who appreciate the impact of topographic diversity in a land set between the dull homogeneity of the Eurasian Plain to the north and the endless sands of the Sahara Desert to the south.” In regard to barriers to species in the landscape, such as the Ebro Frontier, he noted that “we can have fantastic techniques for measuring things but if we don’t have the sense of the biogeography, of the ecology, then really, what are we saying?” Bioclimate, species, and endemism in Iberia were described.

Iberia is clearly ecologically-diverse and one of the main messages of the lecture was that this is often not considered in Neanderthal research and the interpretations of research findings. Perhaps the best summary of this is from the conference abstract of the lecture: “The study of Pleistocene humans continues to be deficient in ecological and biogeographical understanding, and consequently in the way in which we interpret evolutionary processes, trajectories and outcomes. Until that changes, we will continue to be like the Red Queen in Through the Looking-Glass.”