Moments before the power outage

Just ten minutes from kick-off for the start of the Gibraltar National League 2021/22 season with the Mons Calpe and Lions Gibraltar the lights went out leaving Victoria Stadium in pitch darkness.
A power outage across the whole of Gibraltar forced the postponement of the first league fixture of the season after five months in writing since the end of the 2020/21 season.
This was to have been the first match to be live-streamed by the Gibraltar FA, in collaboration with the GFLA and Footters, the latter the new streaming partners.

A late Friday evening kick off after five months without domestic football had done little to help in attendance figures. Just fifteen minutes from kick off the numbers on the stand could be counted easily with just 24 people watching as the league Waite to kick off. The players had completed their warm-up and had been instructed to prepare to start getting ready to line-up to come out onto the pitch when the floodlights fizzled to a stop.
With power not restored for sometime later officials decided to postpone the match and reschedule for a later date.
This was, however, a chance for football enthusiasts and fans to have a first glimpse at the two teams which were due to line up.
For Mons Calpe it’s lineup included some new home grown players with Mohammed Badr, with his new clean shaven hairstyle among the first eleven.
Another of the new faces, returning to football after a short break was John Paul Duarte, who at 34 years of age was now among the veterans in the field.
Sitting on the bench were two other veterans in Gil Bado and Robert Montovio, 38 and 37 respectively.
For Lions it’s was Breakspear, after many years loyal to the club taking the captain’s armband. Alongside him in defence 32 year old Jason Pusey, once a national squad player who has struggled to get to his best after the demise of Gibraltar Phoenix and subsequent injury.
Both teams will now have to wait and see when the fixture will be rescheduled for.
The Gibraltar National League will now hope to kick off at 4pm today Saturday with the St Joseph v Lynx match which should not be affected by any potential power outages. 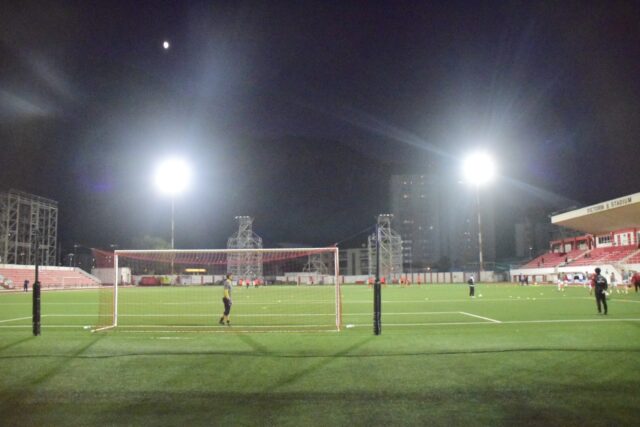 Moments before the power outage