The legacy of the Loreto nuns

This year marks the 175th anniversary of the Loreto Convent and to mark the event local historian Richard Garcia has detailed its history.

The Loreto Nuns, from their arrival in Gibraltar on 16 December 1845, had a major impact on education in Gibraltar and have left a rich legacy in this field. When the nuns set up their first schools, in January 1846, less than a month after their arrival, they immediately attracted a large number of pupils. There were two Loreto schools: one, in a large room at 50 Governor’s Street was for children whose parents could not afford to pay for education, and the other, at Don Place in Governor’s Lane, was for fee-paying children. Boys and girls up to age 7 were taught by the nuns, and only the older girls were taught by them. The fee-paying school soon had to move to new premises in the southern section of Main Street because it outgrew the original schoolroom. At the same time, over 200 pupils were on the roll of the Governor’s Street school. There were also issues with the use of this building as a school, as the wealthy Bonell family decided to build a large new house at 50 Governor’s Street in 1847. It is the house that stands there today. 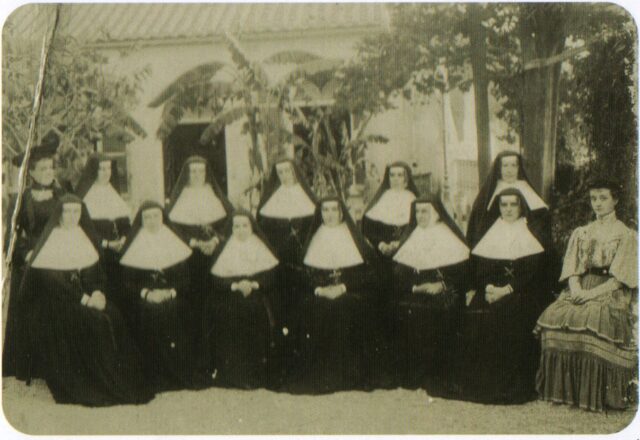 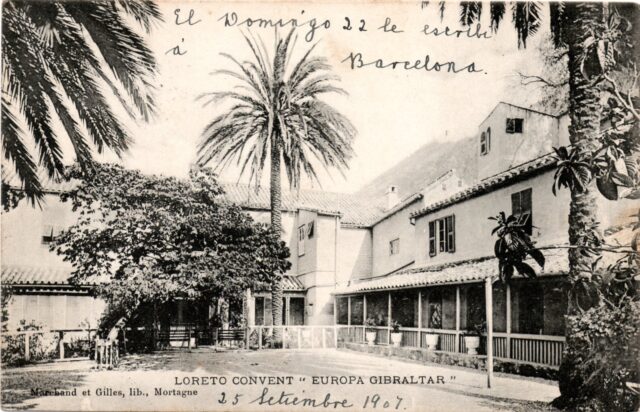 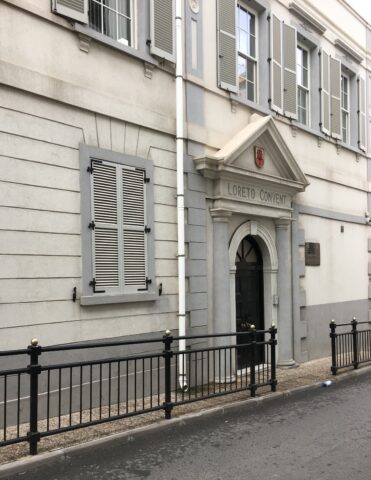 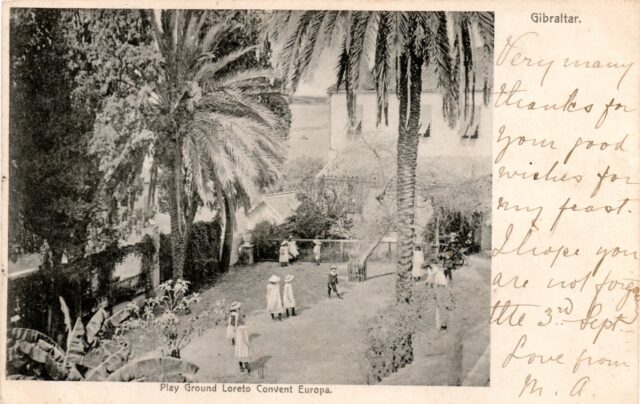 The fact that families in Gibraltar wanted to have their girls educated speaks volumes. In the 19th century, and well into the 20th century, it was expected that boys would find employment and that girls – other than those of a working class background – would stay at home. Girls and women who worked were only allowed to carry out very limited work: as servants, cooks, laundry women, seamstresses and in the tobacco factories. These were times when men were at the forefront in everything and made the rules, and women were relegated to minor roles. The emphasis then was therefore on boys receiving education, as they would need to find jobs to provide for their families.

In spite of these limitations, all families wanted their girls to have a good basic education and to be able to read and write and to master arithmetic. The nuns were there to teach them and to instil basic moral values. Older girls were also taught plain and fancy needlework by the nuns.

The nuns endured personal hardship and poverty in their early years in Gibraltar, and sickness. Some of them died very young. Other nuns were sent from Ireland as a result. It was hard for them, but they persevered. Their efforts were appreciated and recognised by the community at large.

The standard of education provided by the nuns was such that, when an opportunity arose in 1873 to move to new premises at Europa Road, the nuns opened a boarding school which attracted pupils from Spain. They were educated alongside Gibraltarian girls. The reputation of the nuns had spread beyond Gibraltar’s shores. Indeed, it was shortly after this, in 1878, that the Christian Brothers arrived in Gibraltar for the second time, after a brief earlier sojourn, and took charge of the education of boys. Two Irish religious orders were then at the heart of education in Gibraltar for the following century.

The nuns embraced the community of Gibraltar, and in return they were deeply respected and admired. In addition to academic subjects, music, needlework and physical drill formed part of the curriculum. The standard of education that the nuns imparted and the discipline and respect that they instilled in their pupils and students were hugely appreciated. They turned out fully-rounded and educated girls.
There was also a school in the town area that was run by the nuns. For many years, it was situated at Gavino’s Court. When the City Council moved out of its former offices at Convent Place and went to City Hall on what is today John Mackintosh Square, the nuns’ school moved into the vacant building in 1925.

Some nuns paid a high price for being in Gibraltar in the early stages of World War II. In 1940, before the evacuation of non-combatants, a bomb fell on Loreto Convent and killed Sister Lorcan, and the convent’s gardener, Mr Dalia and his wife. Two other nuns were injured, Sister Milagrosa McGovern and Sister Thomas More Devaney. The southern section of the convent was badly damaged and had to be completely rebuilt. The nuns suffered like other members of the community.

At the end of the war, the nuns returned from Ireland where they had spent the war. They arrived on the SS Empire Welland on 15 December 1945, one day before the celebration of the centenary of the first arrival in Gibraltar of the nuns on 16 December 1845.

Education in Gibraltar changed radically after World War II, under Dr H. W. Howes the new Director of Education. Dr Howes is also remembered for his book entitled The Gibraltarian where he analysed census records to describe the development of the Gibraltarian community after 1704. The school at 6 Convent Place, now the central offices of HM Government of Gibraltar, became a Grammar School for girls in September 1952 after the families who had been housed there on their repatriation to Gibraltar after the war had been finally moved elsewhere. It became known popularly as ‘The Green Convent’, from the colour of the uniform of the girls. The nuns were entrusted with running this grammar school, which complemented the boys’ grammar school that was run by the Christian Brothers. At the same time, the nuns continued to run a private school at Europa Road, the Loreto Convent School, which was very highly regarded. 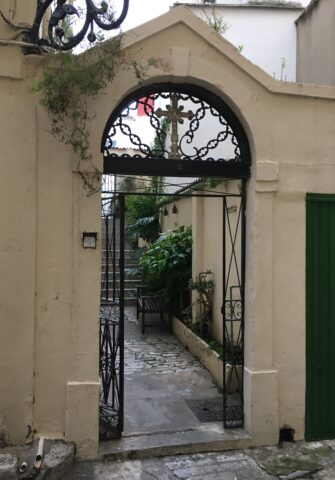 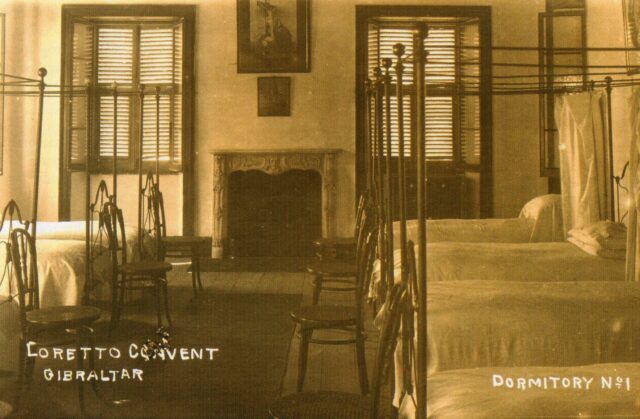 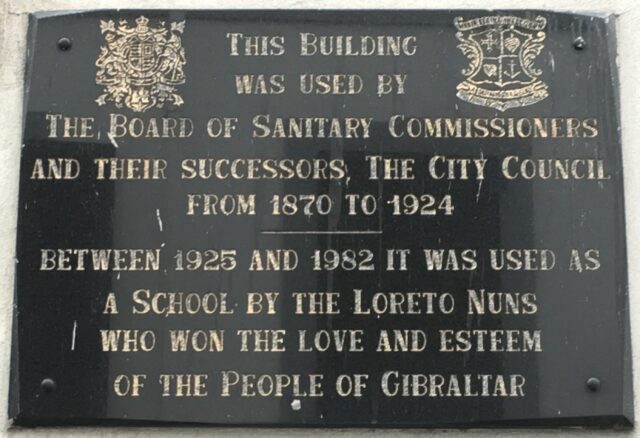 Many years later, after the grammar school system had given way to comprehensive education, and a secondary school for girls had been built in Queensway opposite Chatham Counterguard, a plaque was erected at 6 Convent Place to record that “Between 1925 and 1982 it was used as a school by the Loreto Nuns who won the love and esteem of the people of Gibraltar”. The plaque was the brain-child of Ms Susan Seruya, an ex-pupil. It summed up the affection for the nuns and recognised the standard of education that they imparted to Gibraltarian girls of all religious denominations.

It should be remembered that Loreto Convent School on Europa Road is the oldest school in Gibraltar. It dates back to 1873, a full 147 years ago. It is 22 years older than the Hebrew School, which was founded on 3 September 1895. These two institutions, hallowed by time, point to the importance afforded to faith schools. 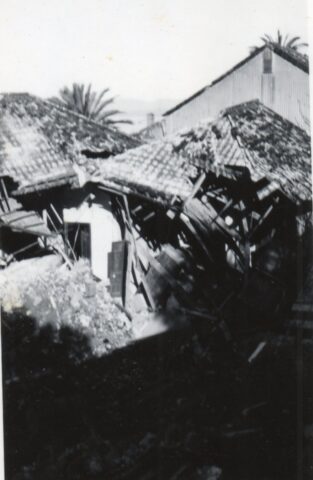 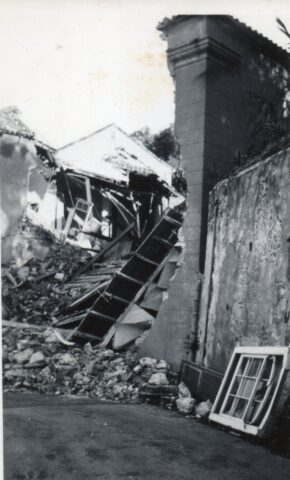 Today, the spirit of the nuns and the quality education with which they have always been associated, lives on in Loreto Convent School on Europa Road. The corridors and staircases, the chapel and the classrooms, the playgrounds and the garden evoke the spirit and the memory of these women who did so much for Gibraltarian boys and girls, and young women. Over and above what was actually taught, they instilled a sense of responsibility, of tolerance and respect. They valued sincerity, honesty and truth. They helped shape the young people in whose hands the future of Gibraltar lies.

The final part of this three-part series will be published in tomorrow’s edition.

A message from the Minister for Education and Culture, Environment, Dr John Cortes

I remember my first day at school so clearly. I arrived at Loreto in my Dad’s car, and climbed what to me were the longest steepest steps ever, which then opened out into this large patio, at the end of which were more steps, and then an intricate complex of classrooms that immediately felt warm, and cosy and inviting. I never looked back.

My days at the Loreto Convent are full of such fond memories that emotions rise and tears well in my eyes as they flood back. They were good days, in a very different Gibraltar. It was a safe place, a place where I leant to read, and to write, and to do my sums, to draw and to paint and to pray. And to have the values that, I like to think.

I have retained to this day. Whenever I go back, either as a past pupil, or as my duties as Minister for Education require, it is still the same place. Evolved and expanded, of course, but its essence and its traditions remain.

Loreto filled a space in this days - and I’m talking of the 1960s - that others have now come to match, as our Education system has happily developed to the thriving, successful community that it is today, for we have wonderful schools in Gibraltar.

But your first school will always be your first school - and I hope, as I write this and remember things I’d forgotten six decades later, that Loreto will help create memories for many decades to come. Happy Anniversary!