Thrifty Malone’s return to the stage

St. George was done proud on his special day when local heroes Thrifty Malone returned in triumph to the hallowed portals of The Lord Nelson on Friday, April 23 after a break of over a year due to the Covid restrictions, though their last actual performance was at the far famed Bar Alioli in Jimera de Libar in October 2020.

‘The Lordy’ was bustling with promise and anticipation as I entered; waiting staff were efficiently and effortlessly gliding to and fro with trays laden with mouth watering selections of food and drinks as the lads were getting ready to play. A few familiar faces that I hadn’t seen in a while greeted me like a long lost friends, and I had that reassuring feeling that I had come home once again. 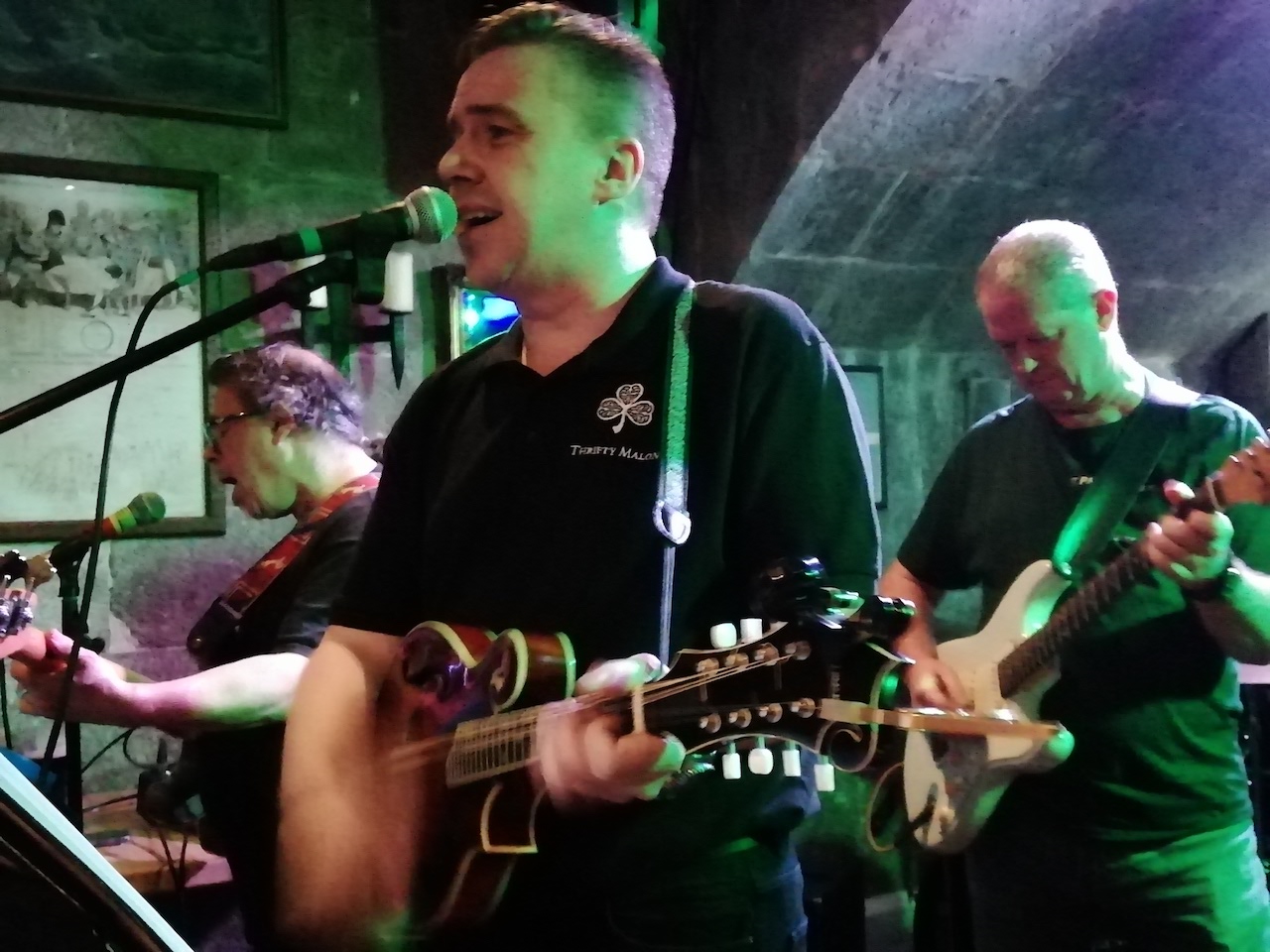 Thrifty Malone really are going from strength to strength, despite the recent lockdowns, having their own material played on radio stations around the world, including the world famous former offshore station, Radio Caroline, which is still broadcasting thanks to a special licence granted by the UK broadcasting regulator, Ofcom.

In next to no time the band were starting up, and in the space of about two and a half hours played a superb selection of their own material as well as well known covers in their inimitable Thrifty style.

The band consists of magical mandolin player Robin Fitzpatrick who fronts the band along with the mild mannered guitarist Alan Jenkins. Trevor Emmett, the pride of Tooting, South London, adds support vocals and plays some tasty bass licks, whilst drummer Martin Winterstein-Smith adds his worthy support in the drumming department. Thrifty Malone started off as a six piece, but after the original vocalist and harp player Paul ‘Zoony’ Alexander retired from his glass blowing exploits to live back in Devon, and guitarist Neil Higgins more recently sadly fell victim to Covid, there are now just four members to carry the Thrifty tradition on.

Armed with a delicious glass of San Miguel, served up by the ever attentive bar staff, I took up pole position to watch the evenings performance. There was a mixed bag of musical delights to savour, from rock infused folk melodies to more traditional Irish songs; some were originals from Thrifty themselves, whilst other well known standards were ably covered. Of particular note was the excellent self-penned ‘Fill Up Me Barrow,’ a song about Irishmen seeking their fortunes in 1840’s America, as well as a wonderful folk punk fusion version of George Thorogood’s ‘Get a Haircut, Get a Real Job’ sung by Trevor Emmett, delivered in a style somewhat reminiscent of a South London version of Ian Dury.

Of course there were plenty of Folk Rock standards too; the ever popular Steve Earle composition ‘Copperhead Road’ went down well as did Bob Dylan’s ‘Wagon Wheel.’
The Rolling Stones ‘Dead Flowers’ was worthily visited as well as a selection of Irish folk favourites like ‘The Wild Rover,’ ‘Whisky in the Jar,’ ‘Bang on the Ear’ and ‘Fields of Athenry,’ which the band dedicated to the memory of Neil Higgins.

During the break, I chatted with some of the band; I was intrigued how Zoony had got his name and Trevor seemed to agree that there was maybe some truth in the story that he had inherited it from a pet alien in the 1960’s Gerry Anderson puppet series ‘Fireball XL5’; this was later verified by the man himself after a quick exchange of messages.
I also learned from drummer Martin Winterstein-Smith that he has recently set up studio recording facilities at Allan Alman’s famous Rock on the Rock club, with a few local up and coming artists benefiting from these facilities.

After this interesting exchange of ideas during the break, in which our thirsts were quenched, Robin gathered the band together for a photo opportunity before launching into the second session, which was every bit as good as the first. The Lordy faithful were soon up and dancing, with a couple of girls light-footedly skipping about like woodland sprites to songs like ‘Call me The Breeze’, ‘O’Sullivan’s John’ and the ever popular Johnny Cash number that never fails to get favour with the crowd, ‘Folsom Prison Blues.’ All too soon, the band were playing their last number, but the crowd were having none of it shouting wildly for more music; Robin looked at the bar manager who promptly okayed a couple more songs with a replay of the excellent ‘Fill Up Me Barrow’ as well as the irrepressible Trevor revisiting ‘Get A Haircut, Get A Real Job.’

The evening was a huge success with punters and management alike; indeed, the word on the wire is that the Hunter Brothers were maybe using this gig to test the water for future live events at The Lord Nelson, including the possible return of the ever popular Live Jam.