Two late goals kills hopes of a point for Gibraltar

It was a tough blow for Gibraltar who were six minutes away from taking their first point in their European qualifiers, only to concede two late goals to finish with a 3-1 defeat.
Julio Ribas put his faith in his young players with one of the youngest squads selected in recent matches. With just three over thirties where usually Gibraltar can have up to five, it was a deep contrast seeing a bulk of the squad aged under 25. From the seven under 25s five were themselves 21 or under.
Gibraltar’s display was also a far contrast to their 5-o defeat in 2016 when they first played Latvia.
The team were not to disappoint with a disciplined, stubborn performance where confidence on the field held Latvia throughout the first half.
Some positive performances from players such as Julian Valarino, Tjay De Barr, Kian Ronan and Graeme Torrilla saw Gibraltar protecting the ball well and confidently trying to take on Latvia. Gibraltar lacking though in that final third of the field play which saw them create few chances of goal.
Although Latvia was to have their first crack at goal in the early minutes it took the hosts sometime to get into any type of flow of play to take the game to Gibraltar.
Julio Riba’s decision to play a young squad proved to have its positives as Gibraltar found themselves stepping forward away from their usual defensive posture with the match very firmly evenly balanced.
Gibraltar’s more open play, however allowed Latvia some extra ground which provided them with several chances to create goal opportunities, although not seriously troubling Coleing’s goal in the first half. The usual six at the back defensive line backed by a tight defensive midfield was not present on the day, with defenders having less support as Gibraltar tried to open up play to take more of the game to their opponents.
Although showing greater confidence and with more possession on the field Gibraltar had few opportunities for goal in the first half.

Gibraltar had entered the field knowing that they had a better chance of a good result than previous group qualifier matches, having lost one and won one against Latvia in previous encounters.
With calls for a more attacking team coming from sectors such as former national coach Allen Bula who went on social media to say that “…Although Latvia no push over Gibraltar can get a result today. Personally 4-4-2 can push Latvia back so they don’t get into game. There 2 CB are quite decent, But both FB very slow to react to transition from offensive to defensive..”
Although Ribas is known as a coach not to guided by comments on social media his first eleven presented a young attacking team where players such as Valarino, Ronan, Britto, Torilla and De Barr had already shown in previous internationals that they were more than willing to take on defences when necessary.
They were to once again provide the same evidence, particularly in the first half.
Gibraltar was, however, to once again find themselves lacking in focus immediately after the half-time break.
Faced with a Latvian side who had come out of the blocks at full throttle Gibraltar were lucky not to concede in the first minute of the second half. The ball shot across goal missing the target by mere inches to the relieve of everyone.
They were to be dealt a blow with just three minutes gone when Latvia were awarded a penalty for what officials believed was a foul inside the penalty area by Jamie Bosio.
With Latvia taking the lead Gibraltar now needed to look for a goal.
With the match reaching the hour mark Gibraltar were lucky not to concede a second after Wiseman lost the ball close to the penalty area. Coleing was called into action doing enough to hamper a shot at goal and allowing for his defence to regroup and clear for a corner.
Hernandez, Mouehli and Pons were to come on as Ribas looked for fresh legs and to create more movement through the midfield.
Tjay De Barr was to create an opportunity on the sixty-sixth minute. The young forward, who could have allowed himself to fall when challenged hard inside the box was to continue trying to make a pass only to find that no-one had followed through in support of his efforts to pick up his pass with a clear chance for goal.
Gibraltar continued looking for the equaliser and were to find it when Roy Chipolina was brought down inside the penalty area. After using VAR the official, who had not initially blown for a foul was to award Gibraltar the penalty. De Barr stepping forward to confidently smash the ball past the keeper.
It was Latvia who was to now find themselves chasing as they tried to press on what was a stubborn display by Gibraltar.
With six minutes left on the clock for the 90 minutes Latvia scrambled a goal to take the lead. A pin ball play inside the penalty area saw a final short pass to the far post which had Coleing stretching unable to reach as the ball hit the back of the net.
A cruel twist in what had been a very good performance by Gibraltar saw Latvia grab a third and final goal with a delightful curler to the top corner.
The defeat was a frustrating blow to Gibraltar players who had before the match highlighted that they were humble enough to acknowledge that the European qualifiers was a steep learning experience still for them.
Ribas had, however, surprised putting his faith on his young players as he continued his policy to keep the squad developing and growing in experience.
The return of Joseph Chipolina and Anthony Hernandez to the bench contrasted with the absence of Jayce Olivero, whose return from injury still was not enough to see him make the final 23-man squad although he travelled to Latvia with the squad. Although all three had experience on the field Ribas had opted to gain experience rather than just merely using what he already had. It was not until the latter stages of the match that Joseph Chipolina and Anthony Hernandez were to step onto the field both stamping their mark, although for a short time.
The young players had nevertheless not disappointed on the day providing Gibraltar with an opportunity which they were unable to finally take with them. Gibraltar nevertheless providing once again proof that they were not merely making the numbers up in the group and having forced Latvia to look for a winner on their own home ground in the final minutes of the match.
It was Latvian players who were to embrace in celebration at the end, this itself a testament to the progress Gibraltar football has seen in recent years since they first played Latvia in 2016 where they lost 5-0 at the Victoria Stadium. 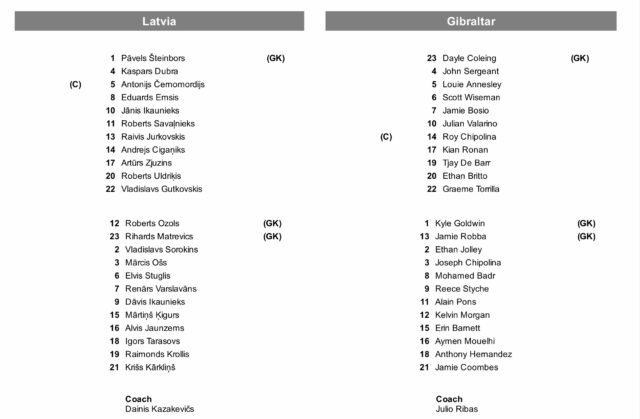