Protesters clash with Capitol police during a rally to contest the certification of the 2020 U.S. presidential election results by the U.S. Congress, at the U.S. Capitol Building in Washington, U.S, January 6, 2021. REUTERS/Shannon Stapleton

The scenes in Washington shocked the world, including Gibraltar where the Chief Minister and the Leader of the Opposition both expressed concern on Twitter. 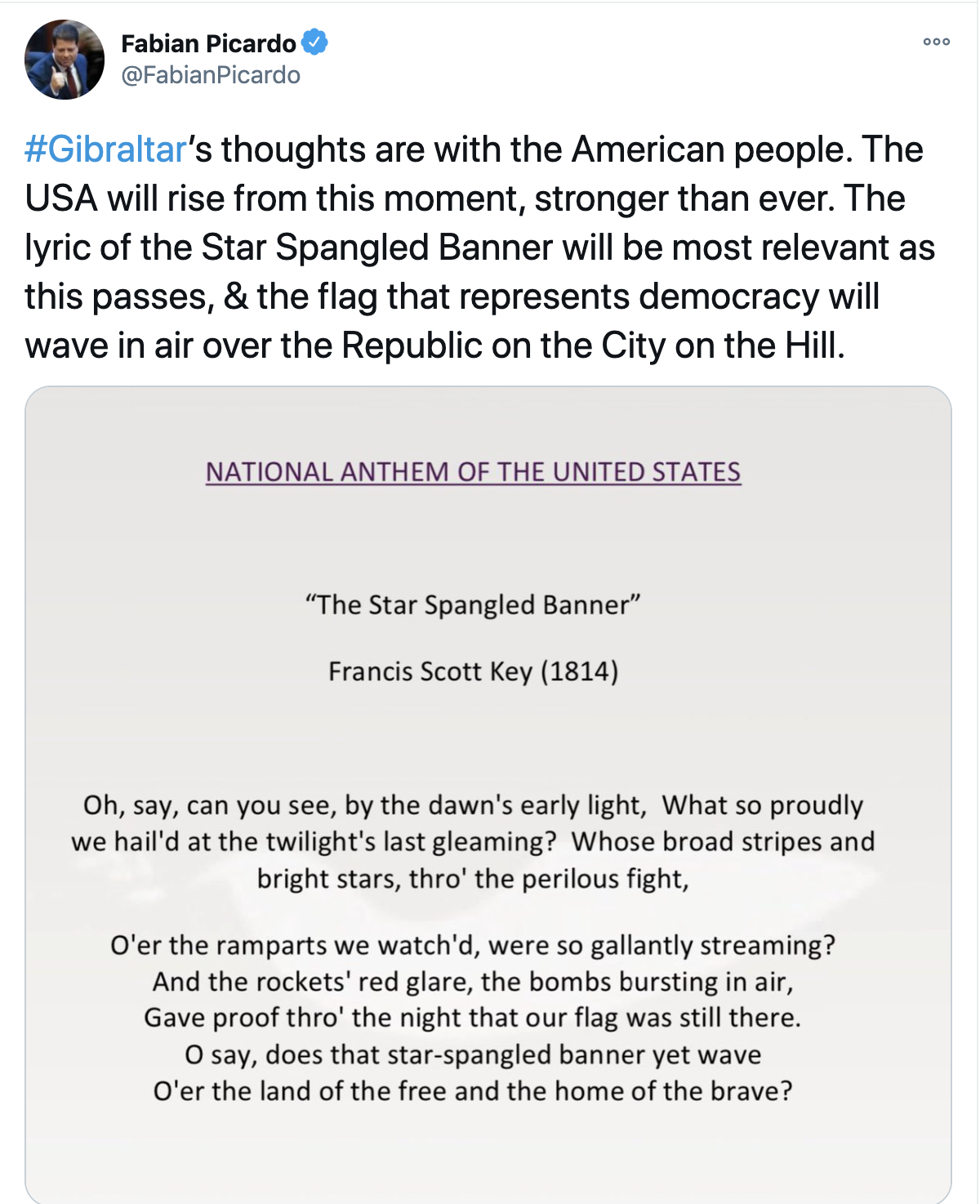 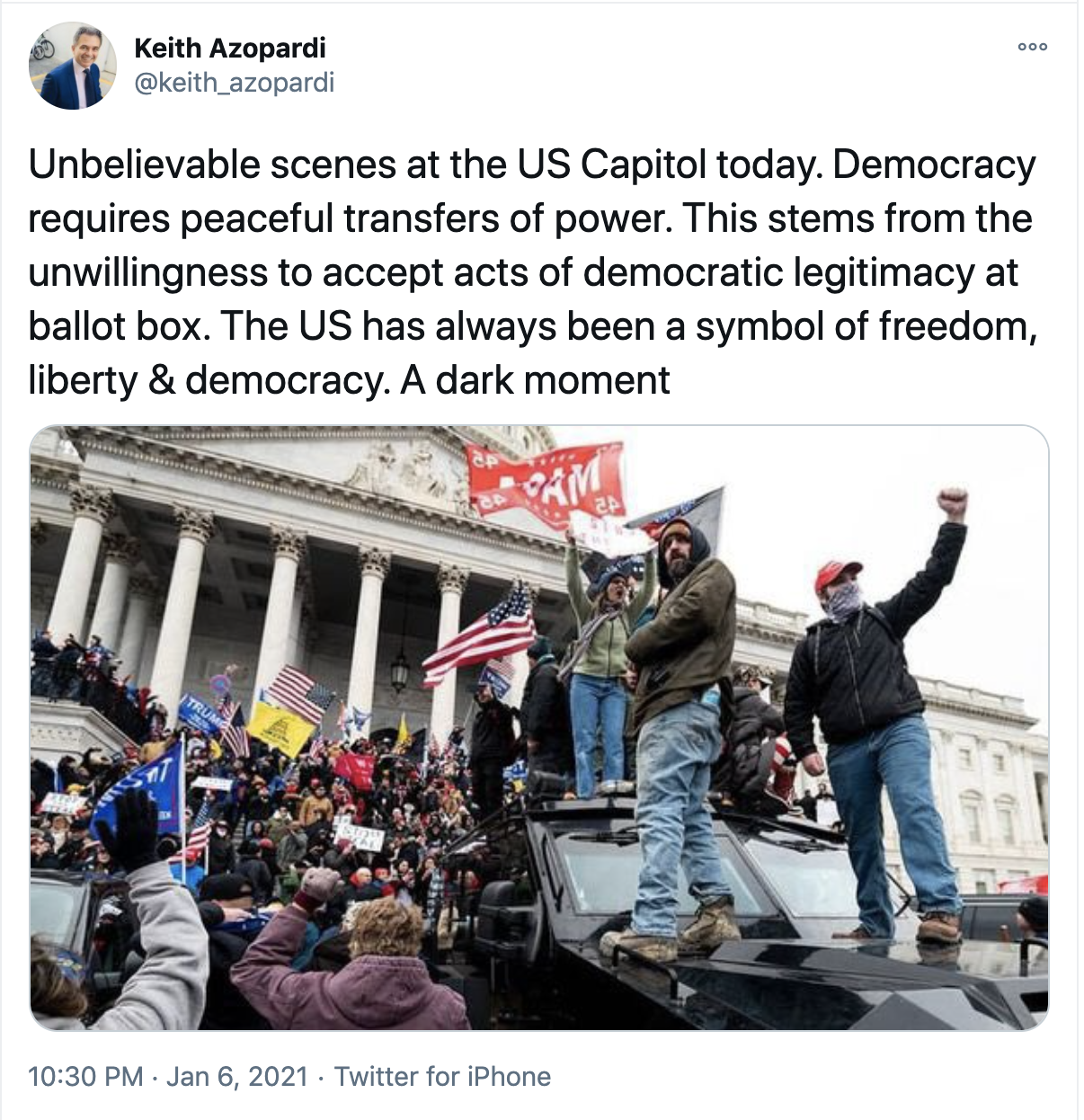 Immediately afterward, the White House released a statement from Mr Trump in which he pledged an "orderly transition" when Mr Biden is sworn into office on January 20, although he repeated his false claim that he won the November election.

Just the previous day, the Republican president had seemingly incited a mob to swarm the Capitol seeking to overturn the election result.

The destructive and shocking images at the Capitol of what other Republicans called an "insurrection" filled television screens in America and around the world, a deep stain on Mr Trump's presidency and legacy as his tenure nears its end.

A source familiar with the situation said there have been discussions among some Cabinet members and Trump allies about invoking the 25th Amendment, which would allow a majority of the Cabinet to declare Mr Trump unable to perform his duties, making Mr Pence the acting president. A second source familiar with the effort doubted it would go anywhere given Mr Trump has less than two weeks left in office.

After the chaos on Capitol Hill, Congress resumed its work late Wednesday certifying Biden's Electoral College win - normally a formality but which included efforts by some Republican lawmakers to stall the process.

As the sometimes tense debate stretched into the early hours of Thursday, the Senate and the House of Representatives rejected two objections to the tally and certified the final Electoral College count with Mr Biden receiving 306 votes and Trump 232 votes.

Mr McConnell, who had long remained silent while Trump sought to overturn the election results, chastised the Republican lawmakers for their efforts to stall certification. He later called the invasion a "failed insurrection" and referred to those who had stormed the Capitol as "unhinged."

"They tried to disrupt our democracy," he said on the Senate floor of the protesters. "They failed."

The outcome of the certification proceedings was never in doubt, but was interrupted by rioters who forced their way past metal security barricades, broke windows and scaled walls to fight their way into the Capitol.

Police said four people died during the chaos - one from gunshot wounds and three from medical emergencies - and 52 people were arrested.

Some besieged the House chamber while lawmakers were inside, banging on its doors. Security officers piled furniture against the chamber's door and drew their pistols before helping lawmakers and others escape.

The assault on the Capitol was the culmination of months of divisive and escalating rhetoric around the November 3 election, with Trump repeatedly making false claims that the vote was rigged and urging his supporters to help him overturn his loss.

Following Thursday's certification by Congress, he issued a statement via White House aide Dan Scavino, saying: "Even though I totally disagree with the outcome of the election, and the facts bear me out, nevertheless there will be an orderly transition on January 20th."

Mr Biden was also bolstered by dual Democratic wins in the outstanding Georgia U.S. Senate races, which will give his party control of both the Senate and the House in the new Congress.

'INCITED THE MOB'
Wednesday's chaos unfolded after Mr Trump - who before the election refused to commit to a peaceful transfer of power if he lost - addressed thousands of supporters near the White House and told them to march on the Capitol to express their anger at lawmakers.

He told supporters to pressure their elected officials to reject the results, urging them "to fight."
Some prominent Republicans in Congress squarely blamed Trump for the violence.

Mr Trump had tried to get Mr Pence and other Republicans to block the certification of the election - the final step before Mr Biden takes office - even though they lacked the constitutional authority to do so.

After Mr Pence made clear he would not accede to Mr Trump's wishes, the president ripped his No. 2 on Twitter even as the Senate, with the vice president presiding, was under siege.

The shock of the assault seemed to soften the resolve of some Republicans who had supported Mr Trump's efforts. Several Republican senators who had said they would mount objections to the electoral vote count changed their minds when they returned to the chamber.

Two objections - to the vote tallies in Arizona and Pennsylvania - were voted down resoundingly in both the House and the Senate.

"All I can say is count me out. Enough is enough," Senator Lindsey Graham, one of Trump’s staunchest allies in Congress, said on the Senate floor. "Joe Biden and Kamala Harris are lawfully elected and will become the president and the vice president of the United States on Jan. 20."

In hastily arranged remarks in Delaware on Wednesday, Mr Biden said the activity of the rioters "borders on sedition."

At the White House, several aides resigned in protest over the Capitol attack, according to sources and media reports, including Matt Pottinger, the deputy national security adviser, and Stephanie Grisham, chief of staff to Melania Trump and a former White House press secretary.

Election officials of both parties and independent observers have said there was no significant fraud in the November contest, in which Biden won 7 million more votes than Trump.

Wednesday's violence drew stunned reactions from world leaders. British Prime Minister Boris Johnson called the events in the Congress a "disgrace", saying in a tweet the United States stood for democracy around the world and that was it was "vital" now that there should be a peaceful and orderly transfer of power.