A warrant penned in the lead-up to the Anglo-Spanish war in the late 1720s, during which Spain laid siege on Gibraltar, will go up for auction on Thursday in London.

The single-sheet manuscript is from James Berkely, the third Earl of Berkely and First Lord of the Admiralty, to Vice Admiral Sir Charles Wager, who was in command of the English naval fleet operating off the coast of Spain.

In the orders, Sir Charles is tasked with intercepting any Spanish vessels in response to Spain’s hostile actions against Gibraltar.

He was ordered to “…to take, sink, burn or otherwise destroy...” any Spanish vessels sighted by his ships.

After nearly three centuries, the letter is being sold by Forum Auctions on behalf of a private UK-based collector.

It is expected to fetch anywhere between £500 and £700 when it comes under the hammer on Thursday, based on the auctioneer’s valuation. 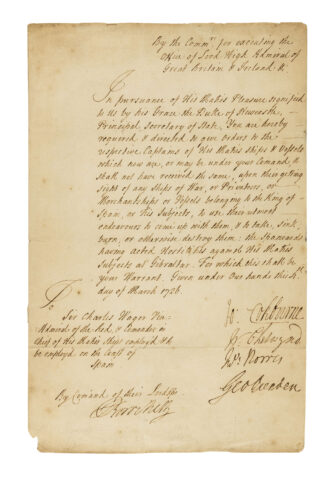 The is an interesting snippet of Gibraltar’s history just 22 years after an Anglo-Dutch fleet captured Gibraltar in 1704 during the War of the Spanish Succession.

Spain had been forced to accept the loss of Gibraltar in the Treaty of Utrecht but by 1725 had considered it the right time to try and recapture the Rock.

Sir Charles had already played a role in those events, having sailed under Sir George Rooke with the fleet that captured Gibraltar in 1704.

By 1727, Spain had opted to launch the thirteenth siege of the Rock but it lasted just four months.

The war itself was ultimately short-lived and ended in 1729 with the Treaty of Seville, which returned the two countries to an uneasy peace.

The warrant will be auctioned at Forum Auctions premises in Battersea on Thursday and online bids are also accepted.