Where have the fans gone?

Opinions and analysis by Stephen Ignacio

Purists will argue that football does not need any other form of entertainment or attraction. Football itself is the only reason that crowds turn up for matches. This, nevertheless, is debatable and has been shown not to be true in most cases with football matches providing across the globe a social and community gathering opportunity where interacting with likeminded people, such as fans of your favourite club, provides the enhanced attraction of why many attend games.
From chanting support for your team to showing your loyalty for your club, from joining in the singing and cheering, it is the buzz of being at a game that many enjoy and not just the football, which of course they want to also watch.
If people only went to see matches for the football then Gibraltar’s domestic football league would have many a question to ask itself after a decline in the numbers of spectators.
Although Gibraltar has never seen massive crowds attending matches - the most which has been seen at domestic matches since entering UEFA membership has been filling up two thirds of the stadium. This past season the numbers have been comparatively low, continuing a decline which was seen pre-covid days.
Matches such as Lincoln Red Imps versus Europa, or even St Joseph’s no longer attract more than two to three hundred specators at the most.
Importantly most domestic league matches during the past months have attracted even less with some as low as just under 50 spectators. Even then those watching included a handful of players not included in the squads, executive members of the clubs and official match observers and the media.
Whilst the decline in attendances comes at a time when the public continues to be concerned over the global pandemic with most events seeing low numbers attending, and when domestic football can be watched on livestream, the low numbers continue to raise questions over how football clubs continue to provide a lack of service to what should be their support base for the future.
Matches continue to be played within a cocoon where outsiders, those not playing or directly involved in the on-the-field activities are not serviced except through social media commentary and the occasional invite to a game.
From entering the stadium spectators will find themselves without many aspects of the game they would normally find in even non-league matches in other countries.
Anyone arriving late will be oblivious to what the actual score is unless they ask who ever is present due to the lack of scoreboard. There will be no signage or indication of who is actually playing on the field, and unless they keep up with the clubs social media or match previews in the media they will find no announcement of matches or who is actually playing.
For those who attend matches basics such as buying a drink or snack will be a cumbersome task which will force them to have to leave the stadium to find a bar, or shop outside to buy something.
Match programmes, except for the rare instances in previous years, are items which will only be available online with some clubs, if you know where to look to find them.
Matches will also have no match announcements, squad list call outs or commentators or music before matches or during the intervals, ensuring that your lack of knowledge of what is going on continues.
Whilst football, even in lower tiers in the UK try to provide some type of match experience for followers Gibraltar football continues to lag ensuring that there is no drum anywhere calling the beat which will attract back fans, even if its for a beer a packet of crisp and a good match of football.
Importantly, clubs, even with their large number of junior and youth teams have yet to provide their own members with a reason to attend other than that they play for them. With no fan zones available, no active Supporters Liaison Officers available and no properly organised events, except for big game matches, even members have been staying away. 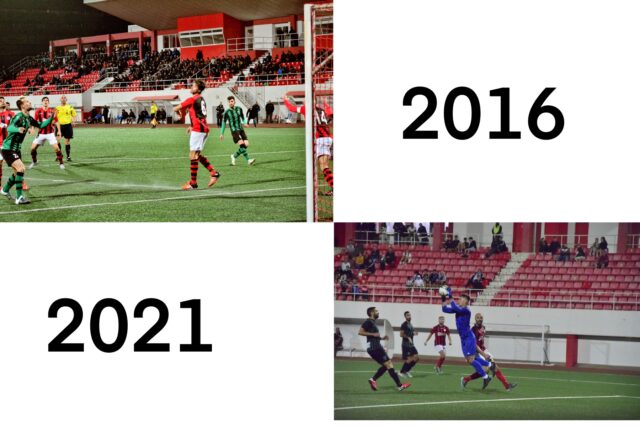