William carries out his first royal visit since start of lockdown

The Duke of Cambridge meets paramedic staff, maintaining social distancing, from the East of England Ambulance Service Trust during a visit to the Ambulance Station in King's Lynn, Norfolk.

The Duke of Cambridge has carried out his first royal event in person since lockdown began – meeting staff from an ambulance station to thank them for their Covid-19 work.

William visited the King’s Lynn Ambulance Station at the Queen Elizabeth Hospital for his first face-to-face meeting with the public in months – but carried out at two metres apart.

During the visit the duke heard from crews about the support they have received from members of the public, local businesses and volunteering networks. 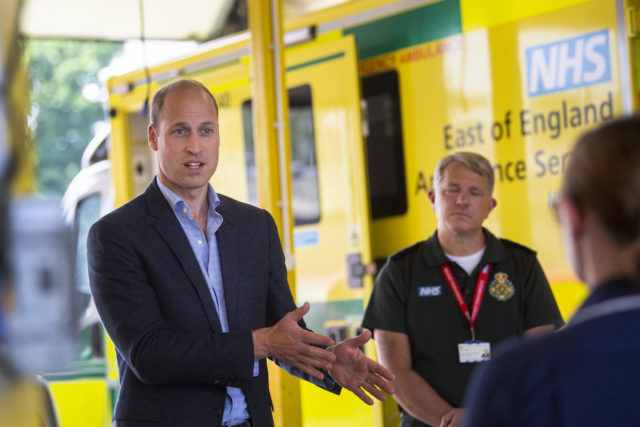 William’s visit follows others made earlier on Tuesday by his father the Prince of Wales and aunt the Princess Royal, as the royal family began returning to normal duties as the lockdown eased.

The crew were from the East of England Ambulance Service Trust (EEAST) which provides round-the-clock accident and emergency services to 6.2 million people living in the east of England.

The service operates over 130 sites and works closely with other blue lights partners, including air ambulances, to ensure that every patient receives the best possible care.

William is likely to know the Queen Elizabeth Hospital in King’s Lynn, Norfolk as he worked as helicopter pilot for the East Anglian Air Ambulance charity.
(PA)