The Line Wall Boulevard is this year 100 years old. The esplanade and steps were constructed in 1921 for the residents of Gibraltar during the Governorship of General Sir Horace Lockwood Smith Dorrien. The plaque on the steps reads that they form a ‚Äòmemoria‚Äô of his regard for the welfare of the people of Gibraltar. Line Wall Road, from the North Bastion, south along the western coast of the town to Engineer Battery, south of the South Mole, is one of the main roads leading into the town centre. Line Wall Curtain built in the 18th century runs from north to south as part of the Line Wall western defences.

At the top of the steps sits the War Memorial of World War I which was unveiled in 1923. Known as the Gibraltar War Memorial it is often referred to as the British War Memorial and commemorates all those who fell in WWI. The statue was sculpted by Jose Piquet Catoli from Barcelona. It is made out of Carrara marble. 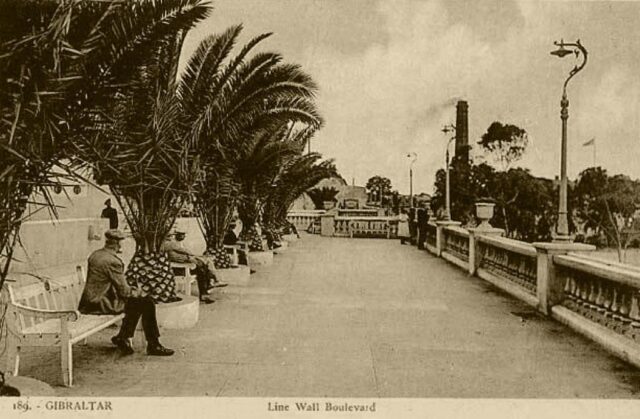 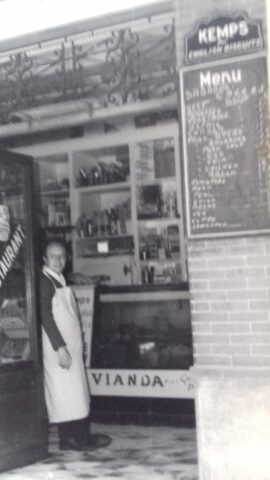 The memorial was unveiled by the Governor of Gibraltar, Sir Charles Monro, during a ceremony on 27 September 1923.

A tablet which sits on the steps first landing is dedicated ‚ÄúTo our heroes of Gibraltar and the Strait Patrol 1914-1918‚Äù. The tablet was dedicated by the Association of Gibraltarian residents in the Argentine Republic. There are another two tablets left and right on walk up the main steps to the memorial. On the left hand side with details of the constructed in 1921, and on the right a tablet dedicated by Belgium to the fortress of Gibraltar in recognition of the warmth and understanding with which during 1940 and 1944 it received Belgians from occupied Europe. It was dedicated in July 1945

Meanwhile the two guns that sit in the esplanade at the same level as the war memorial are Russian guns captured during the Crimean War of 1854‚Äì1856. They were presented to Gibraltar in 1858 for its assistance in the conflict by the British Government. Next time you walk up the steps stop briefly to read the tablets on the walls and on the guns. They make interesting reading.

MEMORIES OF CHRISTMAS PAST

The Gibraltar Heritage Journal No.18 in 2011 featured an article from former GHT trustee Manolo Galliano on his memories of Gibraltar in the 1950s and the Christmas traditions of old. Here‚Äôs a short extract of Christmas past.

My own personal memories of Christmas go back to my early years in St Mary‚Äôs Infant School, situated in Hospital Hill (La Cuesta del Hospital), just opposite ‚Äòla tienda de Agustin‚Äô, which sold all kinds of sweets to us school children. During the weeks leading up to Christmas, we were all busily involved in a veritable cottage industry of manufacturing paper chains, created out of coloured cr√™pe paper, floppy Chinese lanterns and tacky Christmas cards, using cotton wool and bits of silver paper taken from cigarette packets. We also made snowflake ornaments out of many-times folded paper, cut and snipped in various ways and which, when opened, mostly resembled crudely formed doilies rather than the myriad forms of snowflakes. Then there was the classroom Nativity play, with the older boys chosen as Saint Joseph, shepherds or wise kings and the prettiest girls as the Virgin Mary or angels. The rest of us had to be content with being one of the extras and what a disgrace if you were picked to be one of the animals, especially the donkey!

Christmas really arrived for us when Gibraltar‚Äôs only department store, Cazes, in Main Street, set up its Christmas shop window display.

At home, our dining room sideboard was cleared of all

ornaments in order to set up the Nativity scene (el Nacimiento), and a painted backcloth, depicting a dark blue sky with stars, was draped over the backsplash mirror. The dining room would be decorated with ‚Äòcadenetas‚Äô (paper chains) and fresh holly placed over the pictures; to this day, I‚Äôm not too certain whether it was actually holly, as the small red berries were stuck to the leaves with pins. Another important custom, at this time, probably brought over to the Rock by our Maltese ancestors, was to grow wheat grain (el trigo) on moistened cotton in little dishes and bowls. The wheat dishes would be placed in the crib as decorations and then, on New Year‚Äôs Eve, the wheat would be hurled out of the window on to the street, as a sign of prospective good luck

for the coming year. The other essential decoration in the home during this festive season, was the vases of ‚Äòmeaitas de zorras‚Äô which grew in their thousands in the Upper Rock and pervaded the whole house with their sweet scent.

The preparation of food would start in earnest the week before Christmas, with most households making the traditional mantecados ‚Äì rosquitas de vino ‚Äì hojuelas. By Christmas Eve, kitchens across the whole of Gibraltar would be a hive of activity, as ‚Äòtortas de acelgas‚Äô (spinach pies), turkeys, hams and pork or ham joints and legs were cooked. Those households without ovens, or simply preferring to have their meat cooked for them, would take their joints or turkeys to be cooked, for a small fee, to local bakeries in their bread ovens. Others would purchase ready cooked joints from my father‚Äôs shop/restaurant, ‚ÄòThe Golden Ham‚Äô, where he and his staff would prepare and sell over 300 hams in the week leading up to Christmas Day.

THE GHT WOULD LIKE TO WISH EVERYONE A HAPPY CHRISTMAS AND NEW YEAR. WHY NOT MAKE ONE OF YOUR NEW YEAR RESOLUTIONS YOUR CONTINUED SUPPORT TO THE GIBRALTAR HERITAGE TRUST AND GIBRALTAR‚ÄôS HERITAGE SO THAT THE GENERATIONS OF TOMORROW CAN ENJOY WHAT WE ENJOY TODAY.