A modern twist for Shakespeare’s Romeo and Juliet

John Mackintosh Hall was filled with youngsters and laughter on Monday as the Young Shakespeare Company brought Romeo and Juliet to life in a modern context.

The week-long event was organised by the Gibraltar Cultural Services, on behalf of the Ministry of Culture and together with the John Mackintosh Educational Trust, as part of its cultural development and educational programme.

Students from both middle and secondary schools are taking part in the 90 minute event that runs from May 9 to 13.
On Monday, four actors took to the stage and enacted a variety of scenes from the play, each playing more than one role.

And while they may have been acting in a Shakespearean play, they kept the tone and other elements more in tune with modern day Britain than 14th century Verona.

And they offered insight into how a play works on stage.

The actors spoke about staging, characterisation and motivation, encouraging the children to think about how and why different characters took decisions in the play, and how these could be acted out in different ways.

A scene between Romeo and Juliet was used to demonstrate how Shakespearean dialogue could be recited by the actors to make it more believable and relatable to a modern audience. 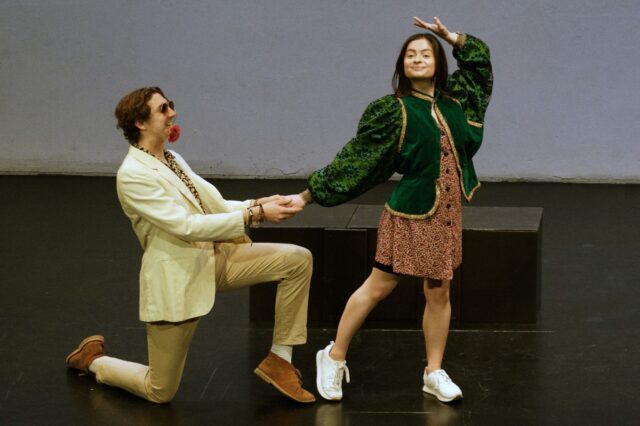 Later, the children dictated the tone of another scene involving the two main characters of the play.

The actors had to act out their lines in a wide range of ways, including presenting the scene for a musical, a pop or rock song, an action scene, another from the wild west and even in horror format.

Two youngsters were also asked to take part in the play and read their dialogue just off the stage.

The children clearly enjoyed the various scenes being played out, laughing at the funny lines and turning their heads when Romeo and Juliet kissed and embraced.

The scenes often included modern songs that the children could easily relate to.