Behind the scenes, vital support from civil servants and volunteers to Gibraltar’s Covid-19 response

With Gibraltar under lockdown, volunteers and the public sector have pulled together to ensure those most vulnerable have all their needs met.

Bayside School used to see over 1,000 students walk its halls daily, but now it is the hub for coordination of Covid-19 related services.

Civil servants occupy the empty school, and from there run a range of services from inventory of food and personal protective equipment to manning phone lines and coordinating the volunteer delivery service.

Each person plays a vital role in Gibraltar’s Covid-19 non-medical response, and for most, this is a stark contrast to their previous day-to-day roles. 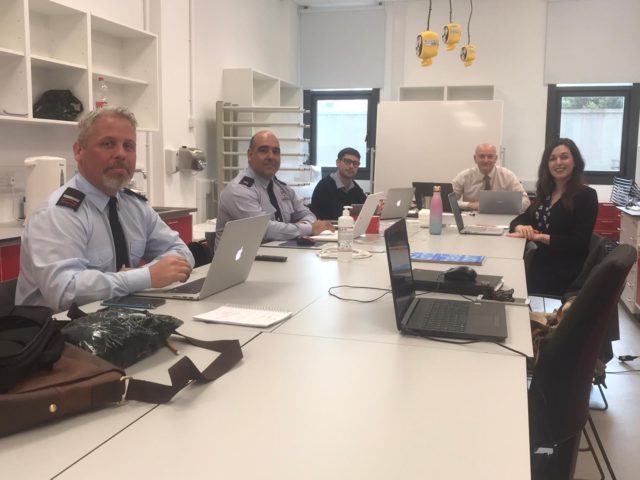 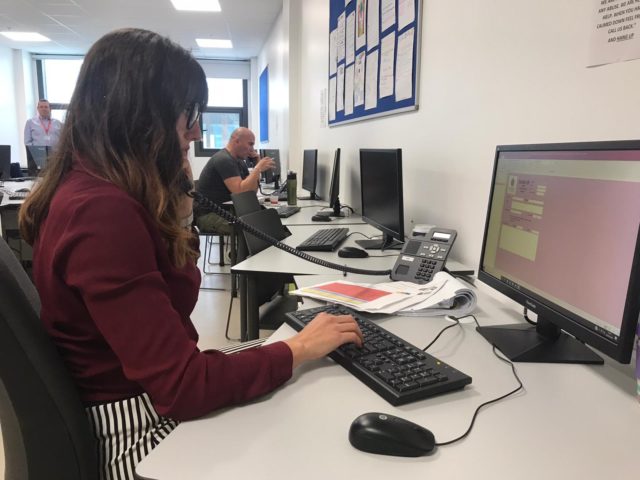 In the space of a few weeks, civil servants have seen their working life upended, having moved offices, working with new colleagues from different departments and working in very different disciplines.

But, for them, their work is more crucial than ever and fulfilling.

They have stepped up to do “more for less”, now working longer hours and quickly settling in to their new roles with a smile.

Walking through the halls, the scenes once seen in this school have dramatically changed in just a few weeks.

Desks and computers previously used by students during lessons are now manned by staff answering calls from concerned members of the public or those vulnerable needing some support during this worldwide pandemic.

Andrew Bonfante and his small team man the 20041818 information line, where they try to answer all non-medical questions regarding Covid-19. 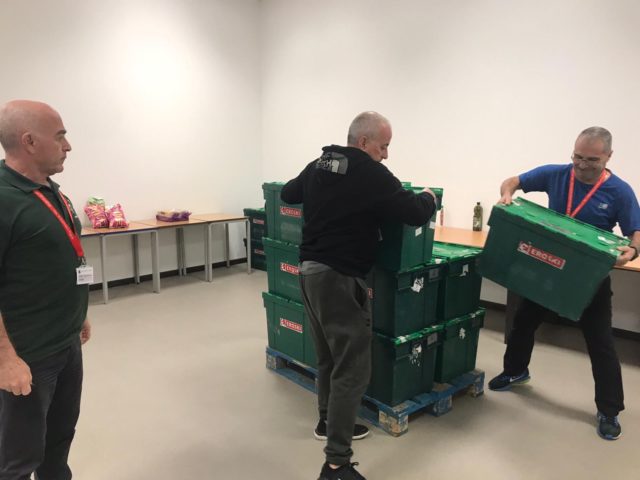 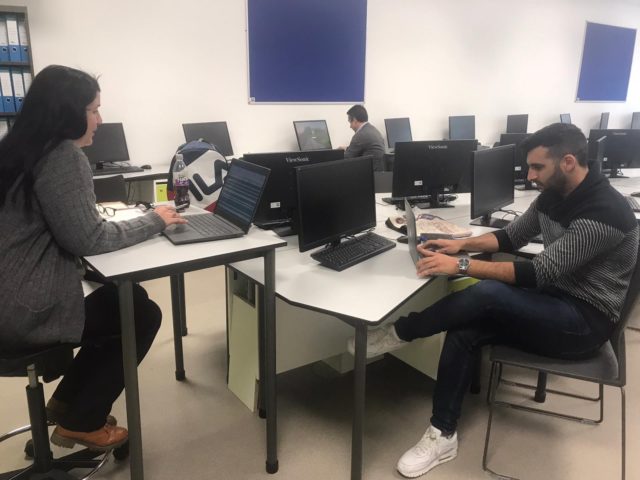 The phone line is also the first point of contact for those in self-isolation requiring non-medical assistance.

Day and night they answer between 100 and 150 calls a day on a myriad of questions, but they advise people to be sensible when they call.

“We get all sorts of calls, anything and everything, it’s become the go to number for Gibraltar,” Mr Bonfante said.

A lot of their work entails finding the appropriate information or referring people to other departments, and also notifying the delivery service if there is someone in need.

Currently in Gibraltar there are some 110 households that have been registered as 'in need’ during Covid-19. These households will be delivered food and prescriptions by volunteers.

“Many of the calls are genuine people who need help,” Mr Bonfante said.

Unfortunately people in need of emergency services for non-Covid related incidents are calling the helpline instead of the emergency lines.

“In an emergency it is best to call direct and not a third party who can delay things,” he said.

He added initially it was stressful for staff as dealing with these situations was not something they were accustomed to.

When those in need call, their delivery request is then passed on to Lizanne Peralta and her team, which coordinates volunteers and deliveries. 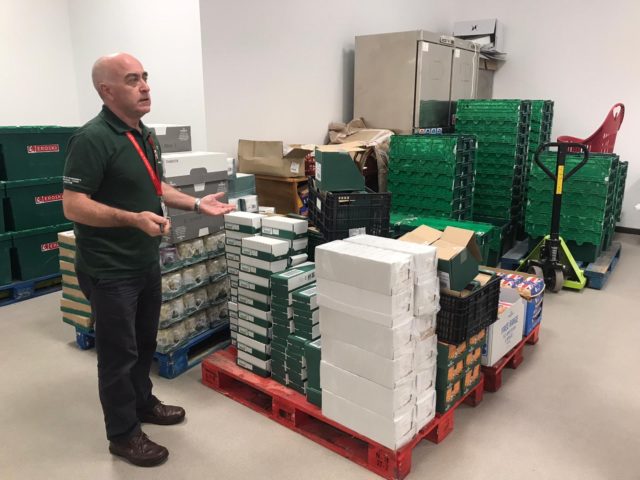 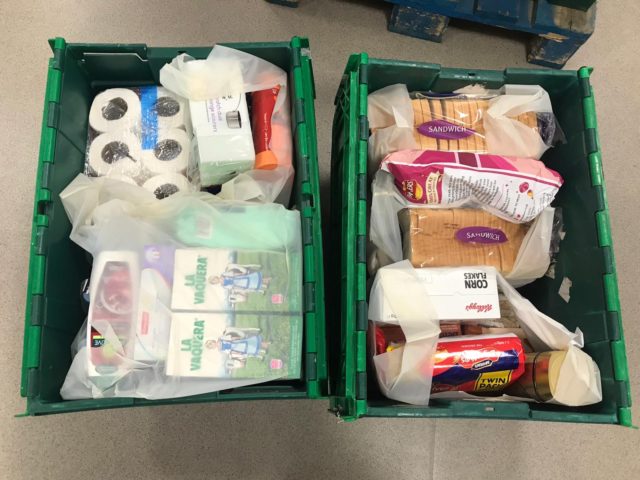 Using the app OrderLord they organise and track the deliveries, sending out requests to those who have logged into the app.

Over 1,100 people have volunteered with some 600 vetted so far. On an average weekday there will be about 30 delivery requests, with this dropping to 10 on the weekends.

Ms Peralta also regularly reaches out to those identified in need to check up on them in case they need something.

There are also people in need of care who have just been identified so the government is continuing to work on reaching out to more people.

Ms Peralta previously worked in the Central Arrears Unit, and has found the change of role fulfilling.

“I can sit down at the end of the day and say I’ve helped,” she said.

“You have that satisfaction that you have helped 30-odd elderly people who have nobody.”

She added: “You also get the callers that are lonely, so you have a person that you are trying to help and they are crying over for phone. It does affect you.”

Justin Bautista, who is working alongside Ms Peralta, said this exercise had helped government pinpoint those who are vulnerable.

He encouraged people to look after their neighbours and those who are vulnerable, and not just close relatives.

Helping staff deal with the emotional weight that may come from dealing with tough circumstances is the job of the welfare team headed by Giselle Carreras, Social Services Head of Therapy and Psychology.

The team, which includes Welfare Officer Sean Keating, Shane Macdonald, Alfred Rovegno, Kyle Bear and Amy Chipolina, is working towards ensuring the mental welfare of staff is cared for.

“We want to want ensure people are flagged up and provided the support that is necessary instantly,” Mr Macdonald said.

“We don’t want to be reactive. So we have developed a new system based on trauma risk management and we have been delivering the training now for the past four or five weeks.”

“Initially it was for the GHA, but we have also had education and Care Agency come on board.”

“There has been a huge uptake from education which has been very positive.”

He added that ultimately their role is to provide people with the right support while at work, and giving people the opportunity to offload.

“We need that resilient workforce if things start getting worse,” he said.

“We keep getting told the worst is yet to come and people are anxious waiting for that. Even that can manifest itself in people’s working practices.”

Mr Rovegno said the knock-on effect of this is people’s stress levels will be heightened.

Ms Carreras added the team has been working hard on ensuring resilience within the frontline staff and have established a service of counsellors on site in the GHA who are available seven days a week from 9am to 9pm.

“We would love to have a 24-hour service but manpower dictates,” said Mr Keating.

Mr Keating explained that many of those picking up the phone lines were in totally different roles prior to the pandemic and this shift to dealing with delicate scenarios could cause them distress.

Mr Bear has been working on an online platform for the ‘befriending service’, for those who are lonely, stressed and fatigued.

The platform would have videos for people dealing with different circumstances.

“We have a section for those who are home during the lockdown, so they have some help care tips to be able to manage their stress and anxiety levels,” Mr Bear said.

“Meditation for people who would like to use that, and articles and forums.”

The platform would also include a contact sheet for people to reach out to the welfare unit.

The team is also looking at a longer term process and are acutely aware that the issues cause by Covid-19 will not disappear once the lockdown is lifted.

Ms Chipolina added that the team is looking at wellbeing and preventative measures.

Michael Pizzarello and his team of retired civil service volunteers, which includes his brother Paul Pizzarello and Brian Perez, are taking stock of personal protective equipment [PPE] to be used by the public sector and food.

They collect items from the food banks donated by the public and donations from Morrisons UK.

The team also takes delivery of all the non-perishable items the government purchases.

From this the team prepares food packs for the vulnerable and the elderly, also ensuring the packs adhere to the different dietary requirements of each person.

“The initial deliveries to people were a full pack of items,” Mr Pizzarello said.

In a downstairs room in Bayside School, just opposite the kitchens, food boxes ready to be delivered to the public are stored.

The items are neatly packed in two large green boxes and labelled and include the necessities such as bread, milk, cereal, toilet paper, rice, water and bin bags.

“A full pack should last somebody a couple of weeks,” Mr Pizzarello said.

He added some items such as bread would need to be topped up, and now the team is organising partial packages.

“It’s fine tuning the equation so that there is no waste,” he said.

Mr Pizzarello added that food that could go to waste is instead donated to Nazareth House.

Any food that is easy to prepare for someone at home.

“We get a lot of odd packets of sweets but as a food bank it is difficult to share evenly,” he said.

“When you have 110 customers, who do you give this [one packet of sweets] to?”

He also recommends that people do not donate food that is on the cusp of expiring.

They have also received quite a lot of baby food, which they are donating to Westside crèche.

For PPE, the team has been gathering information from managers on usage to anticipate the stock needed.

“They are determining what their supply needs are going to be on a monthly basis,” he said.

Students learn the craft of hairdressing in vocational course

Learning to live with Covid — the tough choices ahead