Chinese Paralympian Jingkun Xu is in Gibraltar with his boat ‘China Dream’ as he prepares to embark on a long challenge to qualify for the Vendée Globe in 2024.

This solo race is one of the most famous sailing races and is billed as an extreme challenge for sailors.

But Mr Xu, 32, who lost his left forearm in a firework accident when he was 12, is undeterred.

Six years after the accident, he competed for China in the 2008 Bejing Paralmpics where the sailing competition took place in his home city of Qingdao.

Mr Xu is not a stranger to Gibraltar or to sailing around the world, In June of 2020 he completed his three year round the world trip, setting a Chinese record in the process.

On board his boat in Queensway, Mr Xu sits with a small Christmas tree in the background.

He is not early for the annual celebration. In fact he has not taken it down since he spent Christmas in South Africa in 2019. South Africa was one of the last stops on Mr Xu’s 34,000 nautical mile voyage around the globe, which started in Turkey in June 2017.

That trip took him and his wife from Turkey to Malta, Spain, past Gibraltar to Morocco and down until the Canary Islands, then across the Atlantic to the Caribbean where he visited different islands before making his way through the Panama Canal.

Once into the Pacific Ocean he made his way to the Polynesian islands and upwards towards Papua New Guinea, the Philippines and then China, where he got to see his family in Qingdao.

Departing South Africa and listening to the news, he heard of Covid-19 affecting his home country.

It wasn’t until Mr Xu reached the shores of St Helena that he found out that Covid-19 was now a global pandemic and many countries had shut their borders and were in lockdown.

Having luckily arrived in the British Overseas Territory the night before it too was closing its borders, he ended up spending 40 days there.

“When we arrived in St Helena, the whole world had the virus. The world had changed,” he said.

“All the ports in Europe, American, Africa all had closed. Nowhere to go, just St Helena, so we had to stop there.”

But with no boats or flights coming in some fresh food was hard to come by in the shops.

“Every day it was difficult to find potatoes, vegetables, some fruit and some days no milk. So in that moment we just went to some farmers and worked where the farmer would give us some food in exchange,” he said.

This was how he spent his mornings. But his afternoons were different.

“In the afternoon we would go to the sea and catch some lobster or some fish. We catch a lot of lobster. It was a very weird time, you cannot eat potato but you can eat lobster,” he added.

Forty days after arriving on the remote island, the Azores opened up and Mr Xu made his way there completing his around the world adventure when he did so. 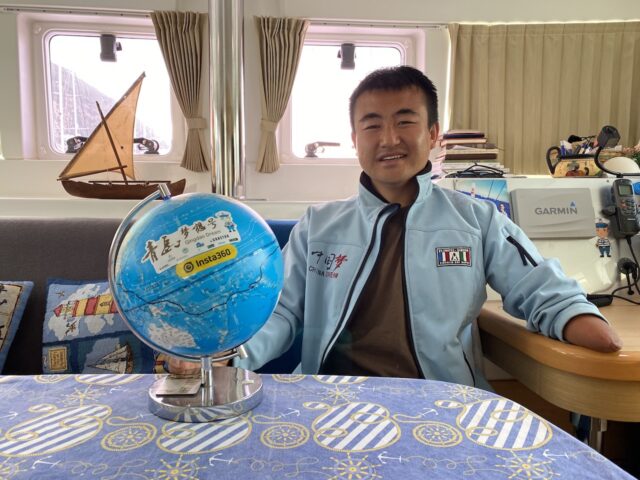 From there he made his way to Portugal where he left the boat and flew home to China to see his family and friends. This year he returned to Europe and sailed his boat from Portugal to Gibraltar and he will now make his way to France.

To qualify for the Vendée Globe he has to obtain a certain number of points in various races, with only 30 sailors getting to take part in the actual event the qualification is tough.

While his previous round the world trip took three years and finished with him dining on lobster in the sunshine with his wife, this time it is non-stop and he hopes he can complete it in two months. This time he will be dining on ‘just-add-water’ rice and noodles.

“No flavour, it’s all for the energy,” he said.

This is different also to the food he was preparing when the Chronicle visited as he chopped up fresh vegetables like carrots.

He will sleep for ten minutes at a time throughout the day, catching perhaps two hours a day. If the weather is good, he might get three or four.

It is an extreme challenge and one that excites Mr Xu who is a firm believer in “dreaming, dreaming big, and chasing those dreams”.

He reflects that children never stop dreaming or do not limit what their dreams may be. But adults always kerb their dreams.

“I thought, what can I do next because I had lost my way. Before I was in the Paralympic team and I always thought I can join the next team but China did not want to continue with the team. So that dream stopped. The lifestyle stopped and I was lost. At that moment I was just 20 years of age.”

“I always think every day what can I do next. Do I go back to normal life, do some business or work or move forward doing sailing?”

With that dream in focus he found a boat in a scrap yard, refurbished it and ungraded some elements and set his sights on sailing solo around the China Sea.

“If you have a boat you must have a name for the boat. I was very happy with my first boat and I thought what name so I was thinking this is my dream so maybe I call it Dream. So in that moment my boat was called China Dream,” he said.

Since then he has had three other boats and all of them have been called China Dream.