To celebrate the birth of Michelle’s project of publishing a book about the evacuation to raise funds for cancer charities her father Joe Gingell wrote this article. The article is dedicated in loving memory of his daughter Michelle whose vision, despite her struggle with cancer, culminated with the selling of more than 3,000 books to raise funds for charities. 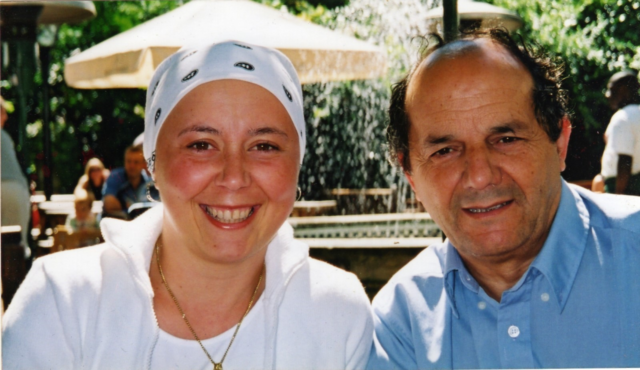 In the summer of 2001, I went to see my daughter Michelle who was then convalescing from her treatment for breast cancer at the Royal Marsden Hospital.

As part of her convalesce plans, Michelle suggested to go for relaxing trip to Whiteland’s College in Putney where I had spent most of the time during the evacuation.

As soon as we arrived at Whiteland’s, memories of my childhood began to come back.

With a certain degree of nostalgia, I was telling Michelle of things I remembered, the places where I used to play with other children, the football ground, my first schooling room, the dining room, the hall where many leisure activities were held, the room allocated to my family and the corridor where we sat when there was an air raid.

Whilst we were walking and talking about the evacuation, Michelle was also taking photos of the things and the places that I remembered. After our tour of Whiteland’s, the Principal of the College introduced us to a lunch with some of the lectures who were curious to find out about the story of the Gibraltar evacuees at Whiteland’s.

It was a fine day and before we left the building, Michelle took also many photographs of the beautiful surrounding area of Whiteland’s.

Whilst walking about the Whiteland’s building, we noticed that there were students involved in activities to raise funds for Breast Cancer, for the Homeless and for the Royal Hospital for Neuro-disability, which is next door to Whiteland’s.

After leaving Whiteland’s, we went to visit the Wandsworth Museum which its only 15 minutes away. From the Museum we were able to acquire very useful information about Putney during the war, including, some references to Whiteland’s and the Gibraltar evacuees.

The next day I accompanied Michelle to St. Luke’s and Christ Church in Chelsea. Michelle in recent years had converted to Catholicism.

She said that her belief in God gave her clarity of thoughts. After attending Church, we went for refreshments in a restaurant, not far from the Royal Marsden Hospital.

There we talked of my recollections about the evacuation which mainly consisted of what my mother used to tell us whenever the subject of the evacuation cropped up at home.

Having seen the students at Whiteland’s raising funds for charity, she also suggested that the profits from the publications be donated entirely to raise funds for cancer charity.

I said, then, that what she had in mind was quite a big task which involved a lot of work. In view the books and documentaries published since the evacuation I said that perhaps it was not worthwhile, commercially, for purpose of raising funds for charity.

Michelle kept inspiring me in that she was convinced that the whole project would turn out into a complete success. “Just have faith and confidence,” she said.

We held several exhibitions which provided us with the opportunity to meet with many who had been evacuated, to listen and record their personal experiences.

During the whole processes we also collected a vast amount of family photos and memorabilia related to the evacuation.

Throughout our public campaign to gather information for the evacuation, we emphasised that the project had several aims; to raise funds charities, to collect memorabilia about the evacuation for posterity, to identifying names of evacuees in the photos, for educational purposes and as a testimony of experiences about the evacuation.

The responses from the public to these exhibitions were excellent. In addition to all the useful information we were gathering we also received much encouragement to proceed with our evacuation project for the purpose of raising charities.

In line with, we pleaded for financial support and received very generous donations which went a long way in meeting the cost of printing.

In early 2007, when the book was already in draft form, Michelle had to leave for further treatment in the UK. I felt completely put off in continuing with the realisation of the project. But Michelle insisted that I should carrying regardless with our mission.

Despite her own struggle with cancer, Michelle was constantly inspiring and advising me to fulfil our mission of raising funds for charities. In her hospital bed she was also trying to obtain fairer treatment for her civil service colleagues with cancer.

On Thursday 14 June 2007, Michelle passed away. Even though she was not physically present to see the launching of book, more than 2,000 copies books were sold for cancer charities in a record time.

We had gathered so much information, particularly, in the form of memorabilia about the evacuation, that a few years later I published another book for mental health charities selling more than 1,000 copies also in a record time.