Gibraltar sports role in European sports was once again highlighted as two of Gibraltar’s sporting association presidents undertook their roles as Vice presidents within their European governing bodies.

GABBA President John Goncalves attended a Board meeting of FIBA Europe last Friday in his capacity as Vice President.

This was followed on Saturday, when he represented Gibraltar as well, at the first live General Assembly held since 2019, the last two having been held online (2020) and hybrid (2021).

Both the events taking place in Vilnius, capital of Lithuania.

Among the persons also present at the General Assembly, were Sasha Volkov, currently Ukraine’s National Teams Director, and Jorge Garbajosa, President of the Spanish Basketball Federation, both of whom are pictured with Mr Goncalves in the photo. 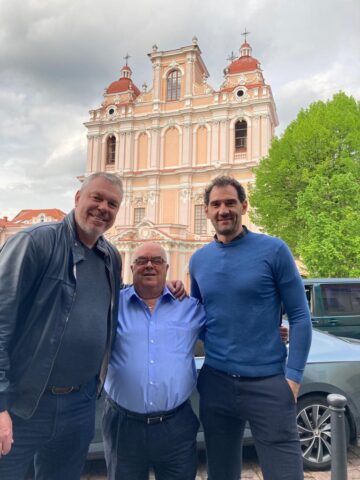 Also representing Gibraltar at an international sporting events was Emma Labrador, President of Gibraltar Volleyball. After her participation at CEV Board Meetings in her role of Vice President of CEV she was to attend the Super Finals where she was to present prizes to the runners-up.

Gibraltar looks at its next decade in football