“In a corner of a foreign field…Part 2”

The Honorary Colonel of the Royal Gibraltar Regiment, Lt Col (Retd) Francis Brancato looks at the Gibraltarian soldiers who paid the ultimate price in service to their country.

Continuing with the theme of remembrance…the call to arms against the dark forces of totalitarianism in 1939 was taken up by a new generation of Gibraltarians eager to serve their country. Once again, they volunteered, fought and died in every major campaign on land, sea and air… many never came home and lie forever far away from their Rock.
2nd Lieutenant Ian Hankey is one of them – he was killed in action (KIA) on 31st August 1942 whilst serving with the 1st Bn Kings Royal Rifle Corps (KRRC), part of 2 Armoured Brigade in the Western Desert, North Africa at the battle of Alam Halfa. Ian was 20, the son of Arthur Hankey and Cecilia Mosley. Ian is buried at El Alamein War Cemetery.

Gunner Joseph Viotto was serving with 965 Battery (part of 12 Coast Regiment Royal Artillery) in Hong Kong at the time of the Japanese attack on the colony in December 1940. Taken prisoner, he was killed at sea whilst being transported as a Prisoner of War (PoW) onboard the SS Lisbon Maru. The ship was unfortunately torpedoed by the submarine USS Grouper just off the Chinese coast on 1st October 1942. Married to Chow Tai Cho from Hong Kong, Joseph’s body was never recovered, and he is commemorated in the Sai Wan Memorial, Hong Kong. Interestingly two other members of the same unit, WO1 Charles Brooks and Bombardier Victor Anderson, had close connections with Gibraltar. Charles was born in Gibraltar on 02/08/1901 (his father was stationed here at the time) and Victor was married to a Gibraltarian. Both were onboard the same ship and are also commemorated at the Sai Wan Memorial.

Several Gibraltarians died in captivity in a Japanese PoW camp, amongst them Craftsman George Taylor Royal Mechanical & Electrical Engineers (REME) who had enlisted in Gibraltar in 1939, initially into the Royal Army Ordnance Corps (RAOC) and later transferred to the REME. Posted to the Far East, he was taken prisoner by the Japanese at the fall of Singapore in 1942 where he was held in the notorious Changi Camp. George died in captivity 05 July 1945, just six weeks before the Japanese surrender. He is buried in Jakarta War Cemetery, Indonesia. 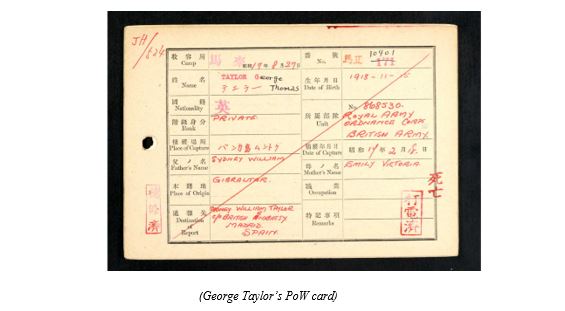 LCpl Albert Bacon had enlisted in Wiltshire Regiment in 1939 and later transferred to the Royal Army Service Corps (RASC). Previously he had been a police officer in the Gibraltar Dockyard Police. In 1941 he was posted to 77 Heavy AA Regt, Royal Artillery and deployed to the Far East theatre of operations. Albert was taken prisoner by the Japanese in March 1942 in Surabaya and held captive in Kuching Camp, Sarawak. He died of Beri-Beri on 05 June 1945 and is buried at Labuan War Cemetery, Labuan Island, Sabah.

Amongst the possessions found in his pockets was a rosary and a photograph of his fiancée Angeles Montado. His brother George, serving with the Royal Signals, had also been a PoW, having been captured in North Africa by the Italians and then held in Stalag 4C by the Germans for over three years.

Lieutenant Augustus (Guy) Carboni, Royal Army Medical Corps (RAMC), had only recently qualified as a doctor in 1939, when he volunteered for military service. Posted to 182 Field Ambulance, he deployed to France as part of the British Expeditionary Force (BEF). As a field surgeon, Guy was in the front lines and it was here whilst leading a stretcher squad that he was killed on 21st May 1940. He lies at Pont-de-Metz cemetery, France. 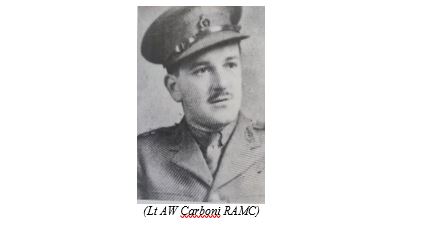 Arthur Sanguinetti was only 20 in 1938 when he enlisted as a regular soldier in the Duke of Cornwall’s Light Infantry (DCLI). In late May 1940, the 2nd Battalion, with whom Arthur was serving, found itself fighting a rear guard action against the German forces attempting to block the evacuation of the Allied Forces at Dunkirk. Arthur was last seen manning a machine gun covering the departing troops when he was killed. He lies at rest in Oostdunikerke Communal Cemetery Belgium 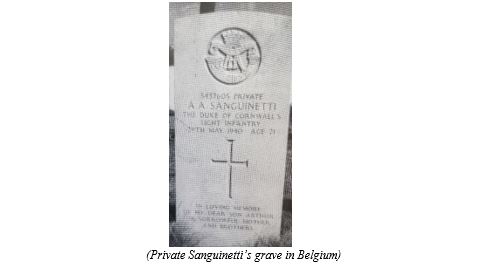 Sgt William Burrage had enlisted in the Royal Engineers in 1934. He was born and grew up in Gibraltar with his father William (a sergeant in the Dockyard Police), his mother Aurelia (Vasquez), and elder sister Daisy. William saw service in North Africa before been posted to 17 Field Company in France. He was KIA on the 12th August 1944 and is buried in Bayeux War cemetery.

Gibraltarians were to be found serving in both the Royal and Merchant navies. George Epsworth was a stoker first class in the Royal Navy. He was serving onboard the frigate HMS Whitaker when it was attacked and sunk by an enemy submarine (U-483) off the coast of Ireland, with the loss of all lives onboard. George is commemorated at the Plymouth Naval Memorial, Devon. 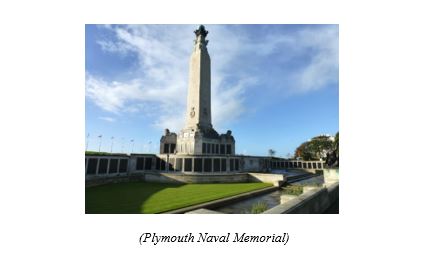 Peter Rodriguez was a Merchant Navy Steward on the Blue Star Line. He was killed serving onboard the SS Tacoma Star on 1st February 1942 when a U-Boat fired a spread of three torpedoes at the unescorted ship some 387 miles north of Bermuda. One torpedo hit at the forward hold and a second struck amidships in the engine room, causing the ship to sink by the bow after four minutes. Peter is commemorated at the Tower Hill Memorial, London.

On the 10th March 1943, the steam merchant SS Culmore was torpedoes just off Iceland by the German U-boat 229 and badly damaged. Charles Hosken was serving onboard the ship as a fireman and trimmer The crew abandoned ship but unfortunately one lifeboat was swept away empty and another swamped, drowning all the occupants except for two survivors. Charles is also commemorated at Tower Hill Memorial. 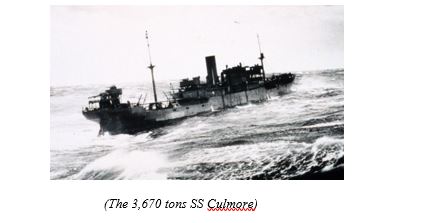 Quite a few Gibraltarians enlisted in the RAF. Sgt Joseph Calamaro Finlayson was one of them. He was serving with 59 Squadron based in Andover as a wireless operator, when the Blenheim IV aircraft he was in was shot down over the Channel on 29th May 1940. His body never recovered, and he is commemorated at the Air Force Memorial Runnymede. 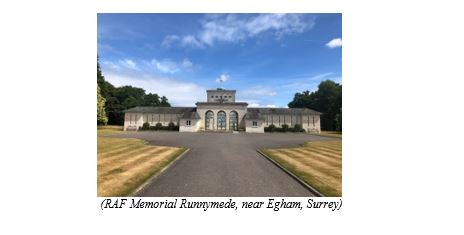 Sgt John Zammitt had emigrated to the US and was living in Brooklyn when the war broke out. He joined the RAF and was posted to 9 Squadron, based in Suffolk, flying Lancaster bombers. Zammit was a mid-upper gunner when he was shot down over Belgium on 23 March 1944. He is buried in Brussels Town Cemetery, Belgium.

Sgt Joseph (Pepe) Rugeroni joined the RAF on reaching his 18th birthday in 1940. Posted to Canada for initial flying training, he was subsequently based at RAF Kinloss in Scotland where he was sadly killed whilst undergoing final flight training. Pepe is buried at Mount Vernon Catholic cemetery, Edinburgh.

Sqn Ldr Gerald Rooney DFC. Gerald was the son of naval surgeon Dr John Rooney and Gibraltarian Evelyn King. Educated at Ampleforth College, Gerald joined RAF in 1936 and in 1941 was awarded the Distinguished Flying Cross (DFC) whilst serving with 42 Squadron based in Leuchars, part of RAF Coastal Command. Rooney also was involved in a famous strike against the German Heavy Cruiser Lützow (ex-pocket battleship Deutschland) on 13 June 1941. Taking off on a mission on 30 August 1941, just two minutes after take-off, the plane crashed into the mountains with the loss of all the crew. Gerald is buried at Leuchars Cemetery Scotland. 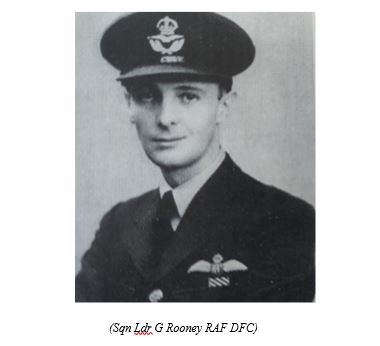 Given its population, Gibraltar paid a heavy price in both World Wars with the sacrifice of its young men in the service of their country. Although most of these are acknowledged and recorded both in the memorials here in Gibraltar and at the National Memorial Arboretum in England, in my research (as well as that conducted by the late Eric Canessa and published in his book “They Went To War”), it is evident that a few have been omitted. It is hoped that this will be corrected soon.