By Tony Jones, PA Court Correspondent
The King has commemorated the late Queen’s lying in state by attending a plaque unveiling ceremony to mark the place in Westminster Hall where the nation mourned the monarch.

Around 250,000 people are believed to have filed past Queen Elizabeth’s coffin, draped in the royal standard and adorned with the Imperial State Crown, ahead of her state funeral in September.

Charles and his siblings, the Princess Royal, Earl of Wessex and the Duke of York, also paid a poignant tribute to their mother the Queen by staging a silent vigil around her coffin during the lying in state.

The King returned to Westminster Hall to meet parliamentary staff, from chefs to security officers, who helped keep Westminster Hall open during the five days the public were able to pay their respects. 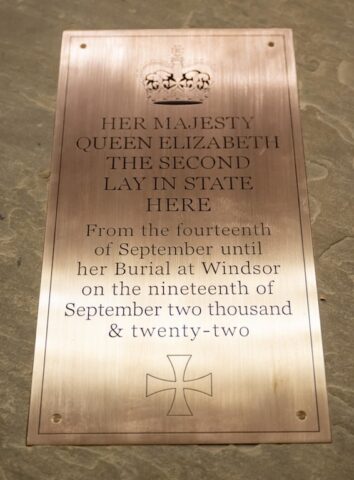 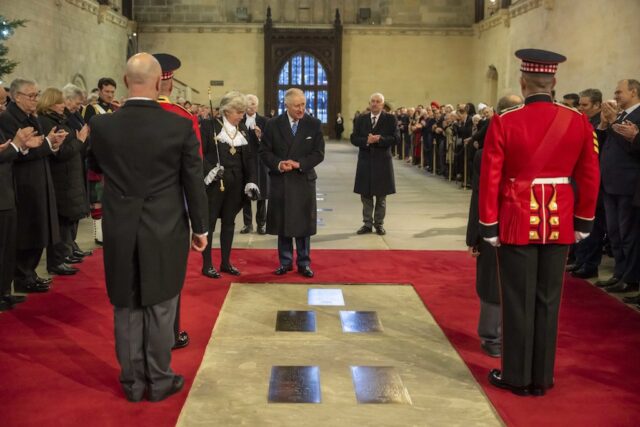 And he pressed a button to light up two ornate beacons decorated with bronze sculptures of heraldic beasts outside in New Palace Yard, gifts from parliamentarians to the late Queen to mark her Platinum Jubilee.

Lord McFall, Lord Speaker of the House of Lords, hosted the visit alongside Commons Speaker Sir Lindsay Hoyle and he described the people who met the King as having done an “heroic job” allowing Westminster Hall to function as a place of pilgrimage for the nation.

Lord McFall added: “Catering staff cooked over 2,000 miles a day and the security alone was terrific, we had 10 rows of airport style scanners screening people.

“There was a lot of gaiety and laughter in the queues as people made their way in but as soon as they got here there was such a solemnity about it, a certain cathedral element to that.”

He highlighted the gift from Parliamentarians as he paid tribute to the late monarch: “We must not forget the Queen’s 70 years and this will be a majestic tribute to the Queen.”

Prime Minister Rishi Sunak, Labour leader Sir Keir Starmer and dozens of peers, MPs and parliamentary staff from the Palace of Westminster watched as the plaque marking the spot where the Queen’s coffin had been laid was unveiled by two members of the military and two Parliamentary staff.

Earlier the mood had been lighted when the King picked up a walking stick dropped by Tory peer Lord Suri as he briefly chatted to those waiting for the ceremony to begin.

Charles also turned to another group and joked that they were “frozen stiff“ which drew laughter.

The Commons Speaker and his counterpart in the Lords asked Michael Ellis MP, who organised the Queen’s Diamond Jubilee stained-glass window in Westminster Hall, to lead the project to mark the Queen’s Platinum Jubilee.

Mr Ellis chatted to the King after the new beacons were unveiled which featured the lion of England, unicorn of Scotland, dragon of Wales and Irish elk of Northern Ireland, created by sculptor Tim Crawley.

The politician said afterwards: “The King loved it, he said they looked really beautiful and he asked about the Welsh dragon.

“He was very pleased the button worked.”