Most fuel removed from wreck of OS 35 after challenging weekend

By Brian Reyes and Eyleen Gomez

Salvors have succeeded in extracting most of the fuel oil from the wreck of the OS 35 during non-stop work over a weekend fraught with challenges and setbacks, and amid warnings that some future pollution from residues on board is likely "unavoidable".

On Friday, having emptied the vessel of its diesel stores, the salvage operation focused on a stern tank that contained around 90 tonnes of low sulphur fuel oil used for the ship’s propulsion.

It was this heavier oil that caused concern earlier in the week following a small spill from two vents that had been capped but popped when the vessel’s hull “crumpled”.

The hull cracked a day after the ship was beached 700m from Catalan Bay after colliding with the liquefied natural gas carrier Adam LNG in the Bay of Gibraltar in the early hours of Tuesday morning.

The Captain of the Port, John Ghio, took the decision to beach the vessel because it was at risk of sinking along with its 24-man crew after sustaining a 10m by 4m gash in the collision.

The Adam LNG, which suffered only minor damage to its bulbous bow, is currently berthed in the Crinavis shipyard in Campamento for repairs. 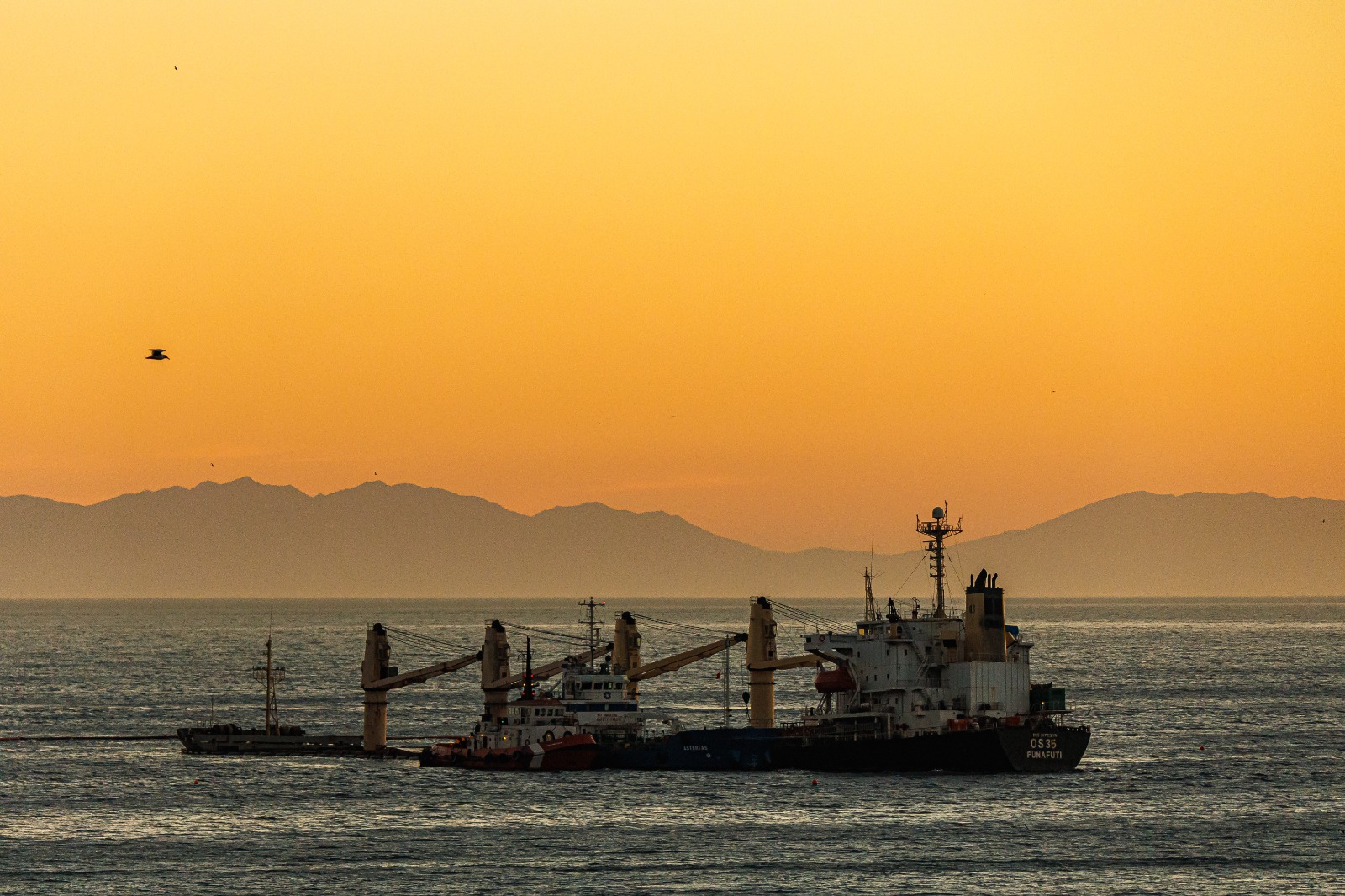 On Friday, as a long slick of oily sheen stretched from the wreck to Europa Point and around into the bay, there were concerns pollution from the wreck would have a major environmental impact.

But as clean-up operations continued at sea and on land through the weekend, the pollution was finally far less than originally feared as wind and tides allowed support boats from Gibraltar and Spain to corral large patches of sheen before they reached land.

Red flags went up around the coastline as a precaution on Saturday but, by Sunday, most beaches here and in La Linea were opened again to bathers, with booms put in place to protect the shoreline as much as possible.

Opposite Catalan Bay, the salvage operation on the wreck was fraught with difficulties and challenges.

Overnight on Friday, the work on the aft fuel oil tank progressed well but, by midday Saturday, the operation slowed after the engine room of the OS 35 flooded.

That meant that salvors were unable to use the ship’s own equipment to help in the operation, as divers inspected the hull to find the source of water ingress.

On board, salvors worked to empty the engine room and pump seawater one of the ship’s cargo holds to add buoyancy and mitigate the impact on the hull’s integrity. They have since patched the damaged cargo hold.

Working through the night, they managed to stabilise the situation and, by Sunday, had identified the water ingress in the engine room as coming from a manhole that had not been totally sealed and was leaking due to the stress on the hull. 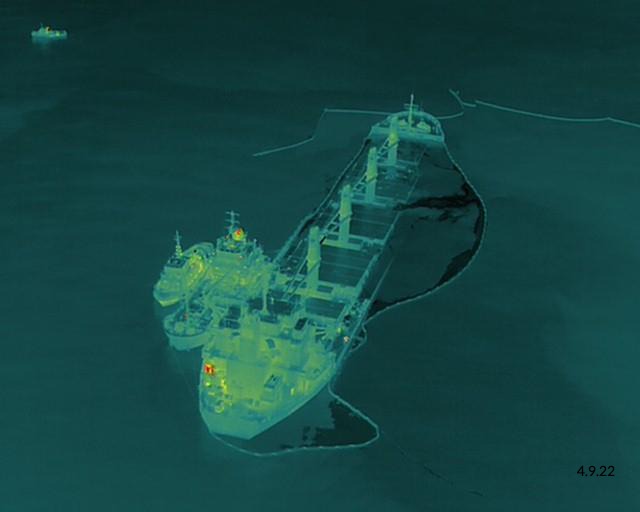 With the manhole sealed, the salvors were able to finish emptying the aft fuel tank and focus fully on extracting the remaining fuel from the forward cargo tank, a complicated operation because this section of the wreck is submerged.

Very slow extraction began on Saturday from the centre starboard section, where the bulk of the remaining oil – some 80 tonnes – was believed to be located. Salvors estimate the forward tank held some 126 tonnes in total.

Initial assessments suggested that the tank was damaged by a minor crack that was letting water in.

“The extraction from this tank therefore needs to be done by relying on the pressure of the water entering the tank pushing the oil upwards toward and through the tank vent,” the Gibraltar Government said on Saturday.

“This is a slow process that is managed carefully in order not to increase the amount of water that is mixed in with the fuel when extracted.” 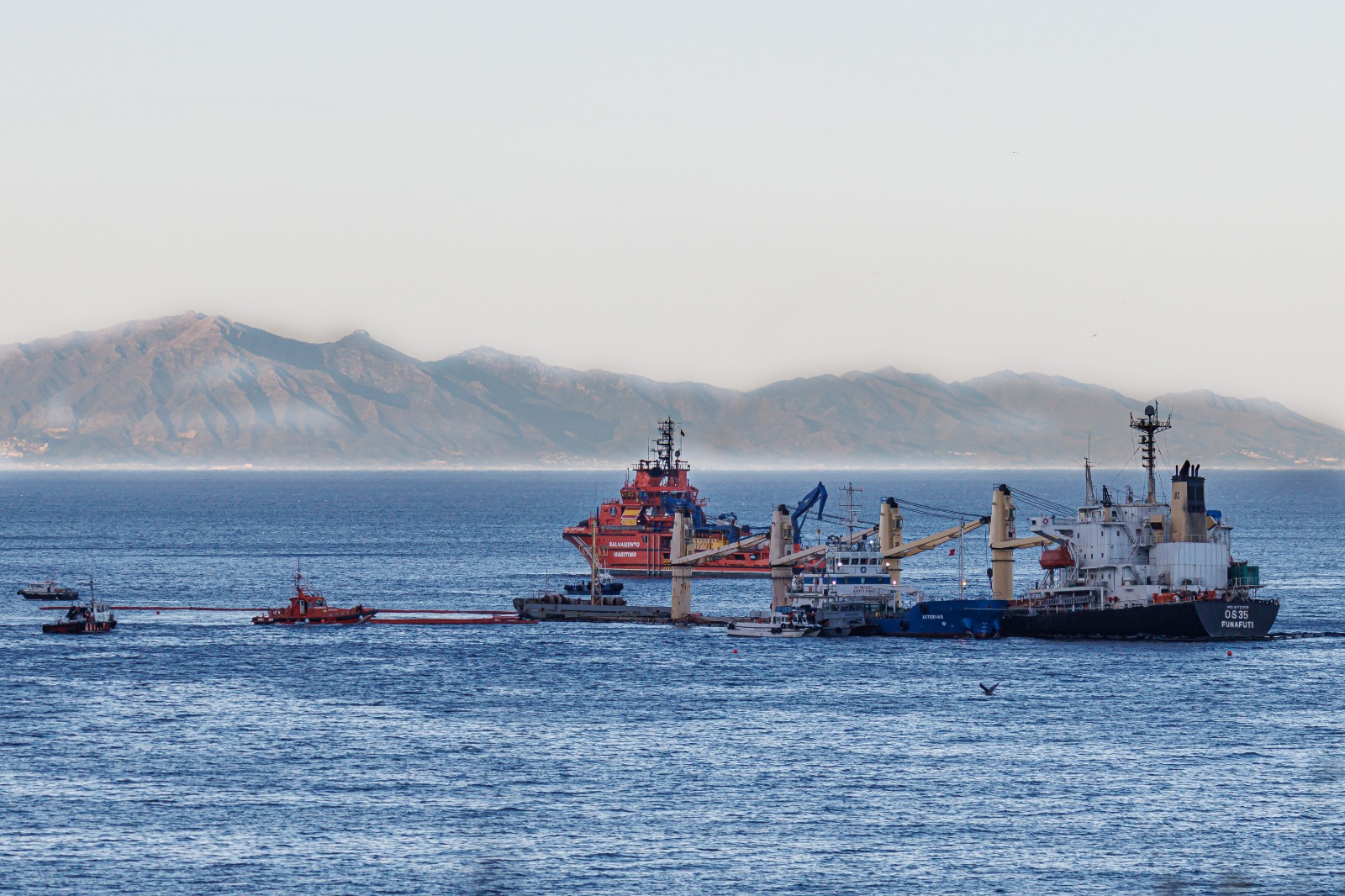 But by Sunday afternoon, some 41,000 litres of fuel and water had been extracted from the central tank, with the work continuing into the evening and overnight to pump out what is left.

Exact figures will be provided today but early indications suggest most of what can be removed using pumps is now of the wreck.

The OS 35 was carrying 215 tonnes of heavy fuel oil, 250 tonnes of diesel fuel and 27 tonnes of lubricant oil when it was beached.

Work to extract the lubricant oil also started on Sunday.

At the same time, salvors worked to remove other potential contaminants - chemicals, food, loose items – and drew up plans to clean the fuel tanks as much as possible in order to remove residue and any remaining oil in a controlled manner.

This is crucial because, while the weather has been good so far, the ship will likely remain beached for many weeks, if not months, and a storm could open up a new set of challenges, potentially breaking the wreck up further.

“It is important that salvage teams take advantage of every available minute of the good weather for this and thereby avoid as much contamination as possible if the weather turns,” the Gibraltar Government said.

While the salvage operation is under way on site, a separate team is considering longer-term options to deal with the wreck.

That could include trying to refloat it to tow into a sheltered area, although given the ship’s condition this option seems unlikely.

The more probable outcome is that the wreck will have to be scrapped on site. 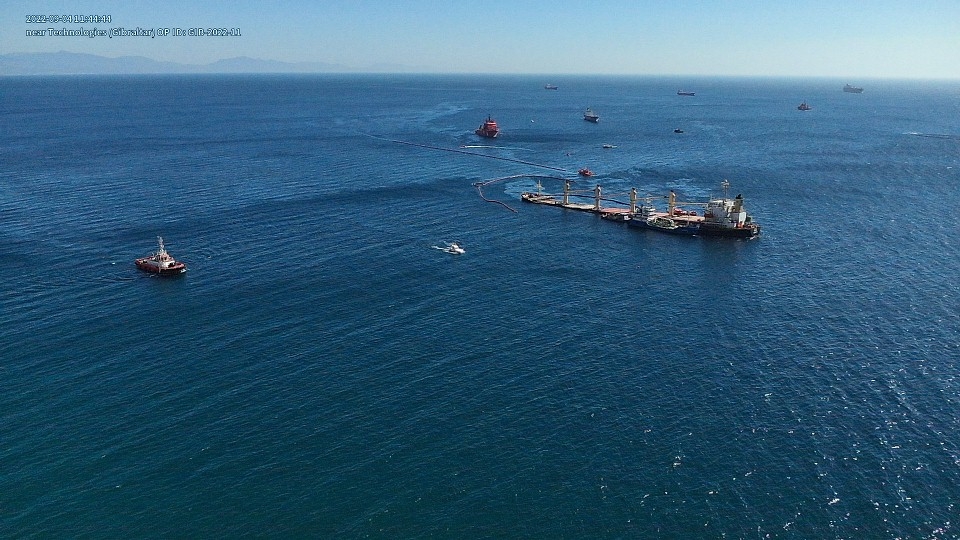 Estimates as to how long that might take range from anywhere between six to 20 weeks, an operation that will be further complicated by the fact the OS 35 is fully loaded with a cargo of steel rebars.

Chief Minister Fabian Picardo, who along with the Governor, Vice Admiral Sir David Steel and other members of the Gibraltar Contingency Council, was being briefed regularly through the weekend, said nothing had been ruled out at this stage.

“All options for removal are being considered,” he told the Chronicle.

Over the weekend, measures to contain any oil seeping from the ship were bolstered with a second containment boom around the wreck, a “complex operation” in which two large Spanish state-owned salvage tugs, the Luz de Mar and the Clara Campoamor, played a key role.

A 500m exclusion zone has been established around the wreck and legislation published in the Gazette allowing police, customs, port and environment officers to enforce it.

Spanish assets including helicopters and aircraft continue to support the operation in close coordination with the Gibraltar authorities, providing resilience at sea and surveillance from the air to track patches of drifting oil sheen. 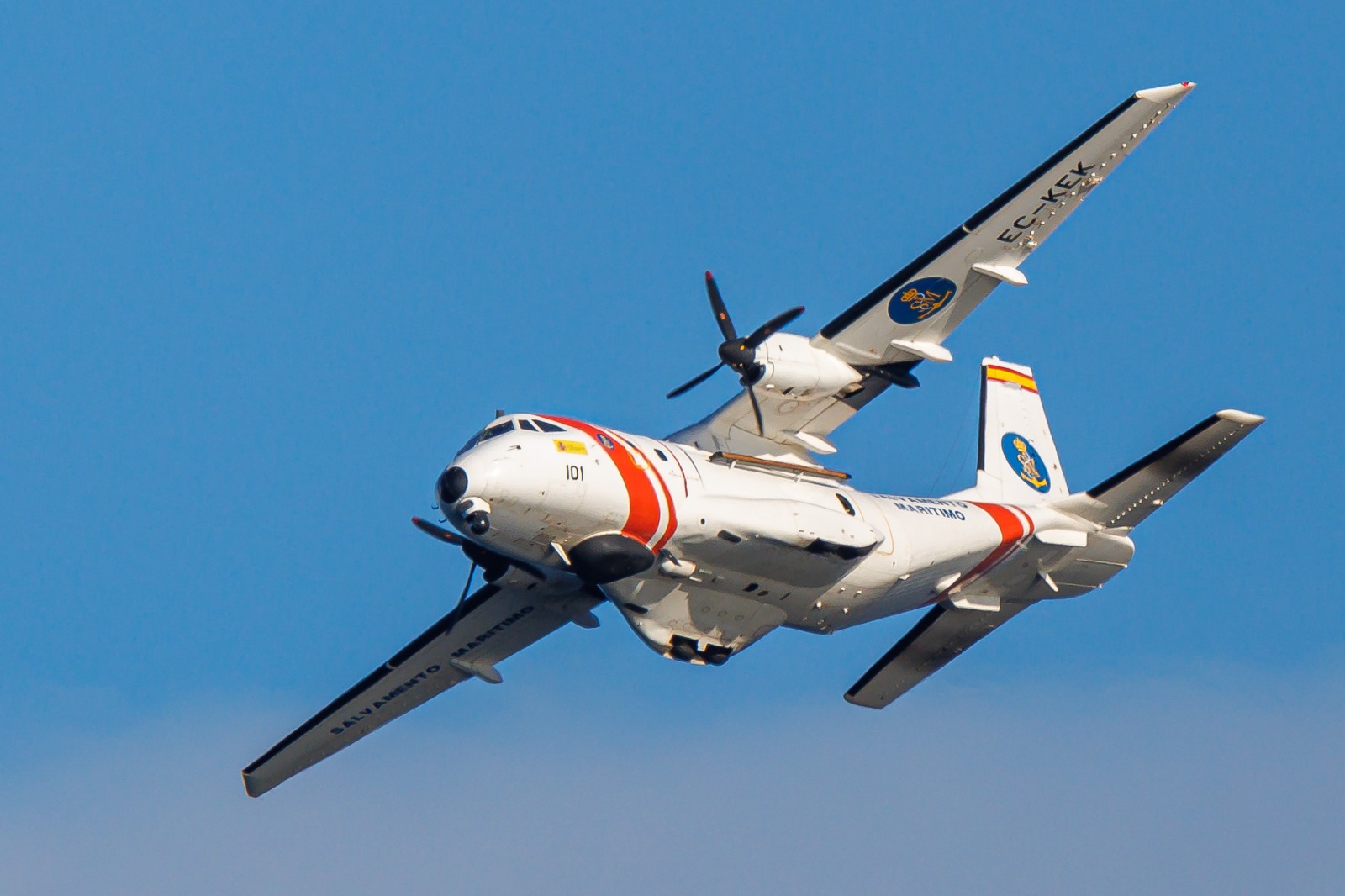 Reports from those flights indicated that the bay was clear of oiling or free-floating sheening on Sunday.

The situation on the east side had also improved significantly, although there were still some patches in the area.

On Saturday, against the backdrop of some criticism of Gibraltar’s response to the incident, the Spanish Government’s top maritime official praised Gibraltar’s decision to ground the OS 35 in shallow water on the east side of the Rock.

In an interview with El Pais, he said beaching the vessel had been the correct decision and meant salvage and anti-pollution operations would be easier.

“We can talk about details, but the manoeuvre was not incorrect,” he told El Pais.

“Everything is easier when it’s close, the same when it comes to containing pollution.”

“The visuals are more dramatic and troublesome, but it’s better.” 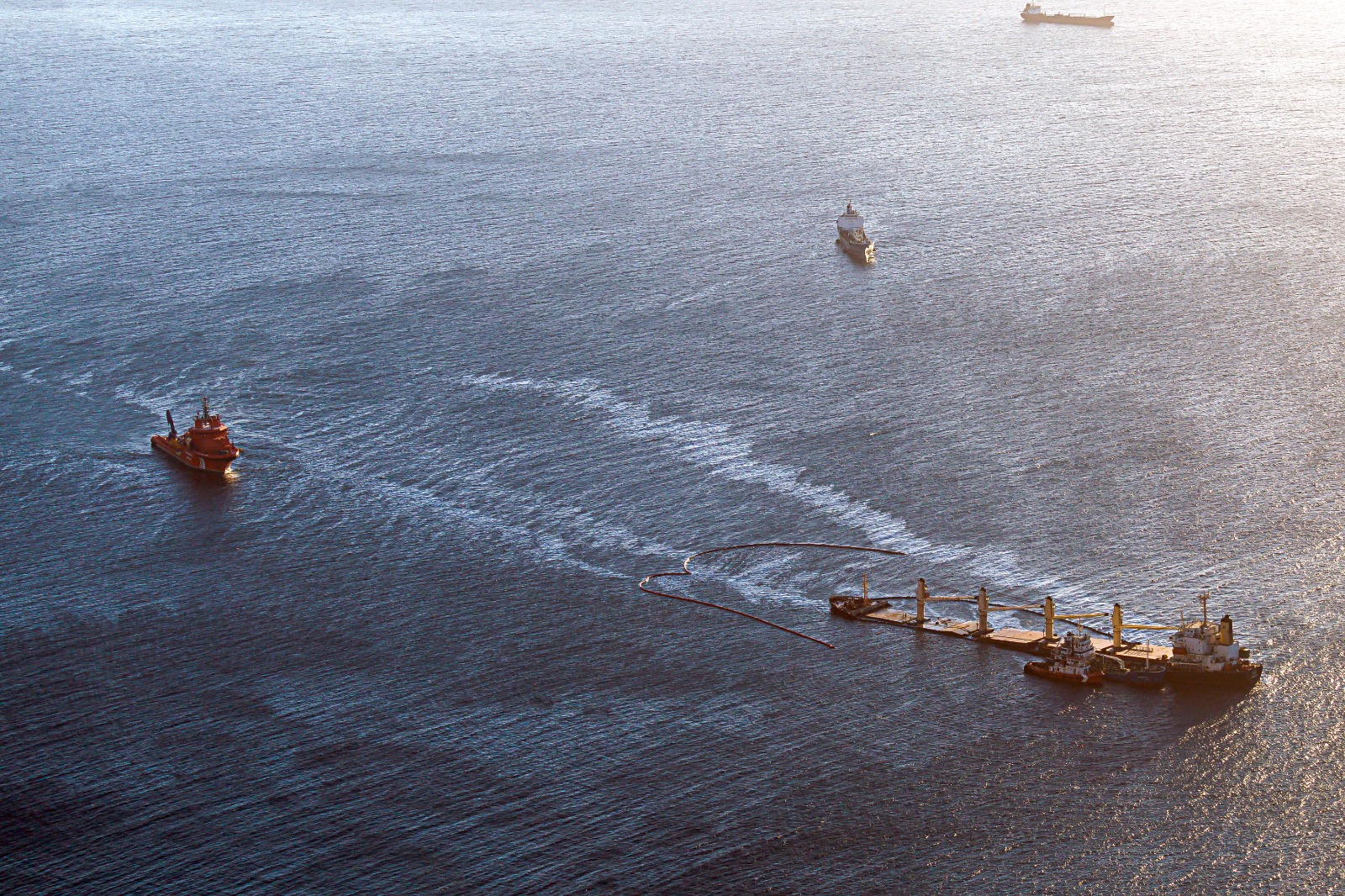 Despite the positive progress on the wreck and the mammoth clean-up operation at sea and on land, the Gibraltar Government issued a stark warning that further pollution was likely in the coming days and weeks.

Even after the tanks are emptied, residual quantities of fuel oil and the vessel’s “crumpled” hull mean continued seepage of small quantities of pollutants are “almost entirely unavoidable” until the wreck is removed.

“The deployment of booms in layers around the vessel will prevent to the highest possible level the amount of seepage into open water but they will not provide a watertight layer of containment, which it is not technologically possible to provide,” the Gibraltar Government said. 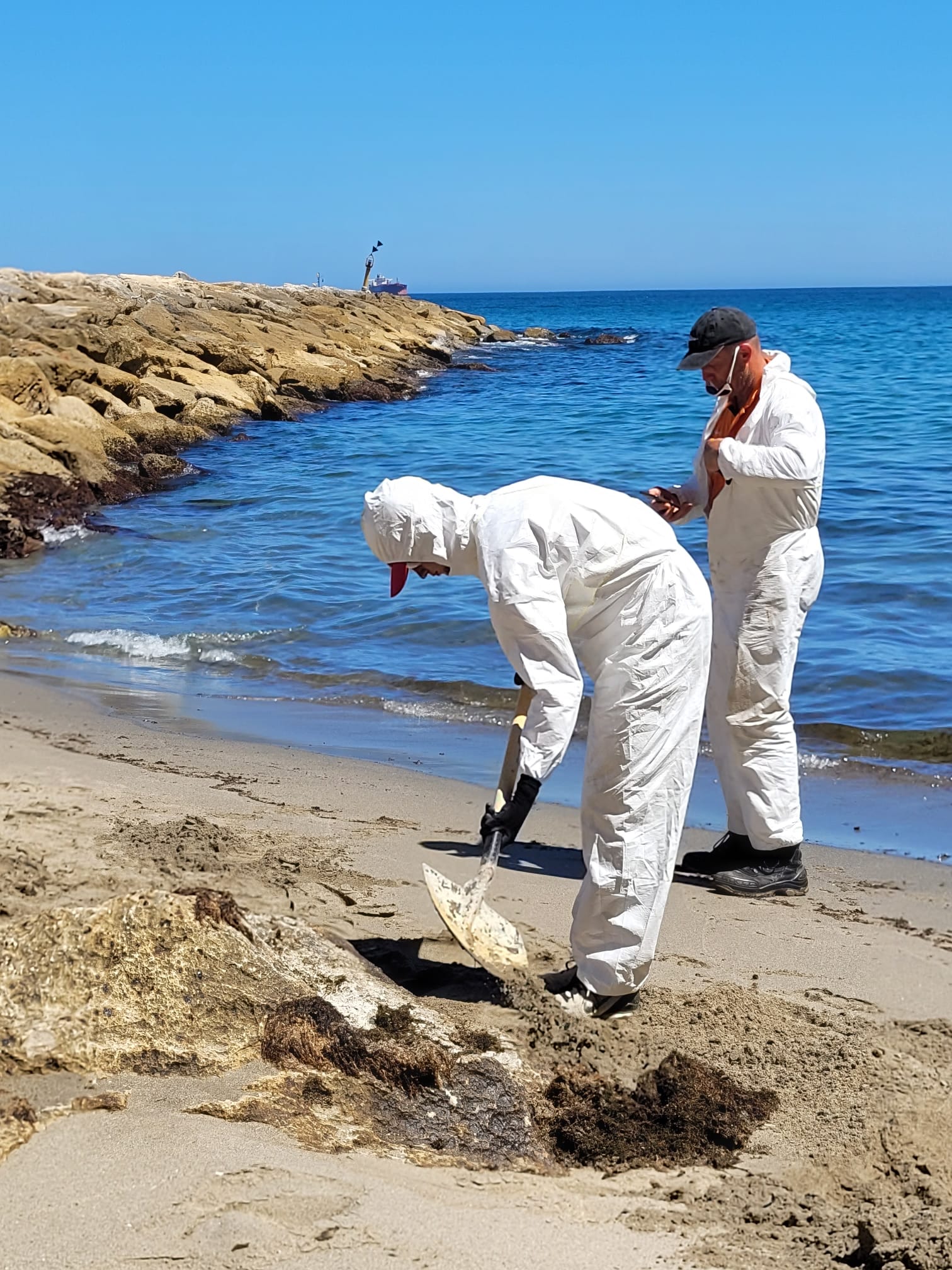 Throughout the weekend, teams from the Department of the Environment, supported by local environmental NGOs and teams of volunteers, monitored the coastline and carried out cleaning operations where necessary.

In Sandy Bay and Little Bay in particular, globs of black oil had washed up on the beach shore and on rocks.

Some oily patches were also found at Gorham’s Cave and there were reports of some gulls and Mediterranean Shags soiled with oil, although as this edition went to press none had been discovered in distress.
Montagu Bathing Pavilion was also closed due to oil sheening.

“It’s been a great effort by all volunteers in assisting authorities in the removal of oil contaminated material from different areas in Sandy Bay,” said a spokesperson for the Environmental Safety Group.

“Evidence of black tar splattered on coastal rocks was upsetting to see.”

“The oil stuck to layers of sand and seaweed, which made its removal very challenging.”

“Further spill prevention is key here and we hope news of improved containment of remaining fuels as these are removed from the vessel continues apace, safely and cleanly and ends as soon as possible.”

“Volunteers left [after Sunday’s cleaning] in the knowledge that they may well be called back.”

AquaGib conducted diving inspections at Little Bay and in Waterport and confirmed that the salt water intake inlets for its reverse osmosis plants remained unaffected.