Music lineage through the generations

My interest in music and the vital part it plays in my life has always filled me with curiosity about local musicians in Gibraltar’s past and present.

I began this journey with my parents and their own involvement in the Agrupacion Artistica Calpense (my great-uncle Gustavo Mascarenhas who was one of the founding members) and then in my early days at Radio Gibraltar, when not yet 20, I produced and presented a programme called ‘Musicalrock’.

Today I feel proud these programmes form part of the Rock’s musical history. I was fortunate to interview the likes of Pepe Noguera, Francis Caruana, William Gomez and Hector Cortes, all sadly no longer with us. But their memories are there for the taking.

I also got to interview some of our prolific songwriters of the sixties and seventies and in particular the song writing partnership of Guy Palmer and the late Ronnie Israel. For a long time now I have wanted to revisit this interview and add to it.

I remember being in the audience when Guy and Ronnie came second in the1973 Gibraltar Song Festival with ‘Tu’ sung by Louis Vinet.

The winning song that year was ‘Por el camino aquel’ written by Gomez/Cortes and sang by Francis Chipolina. I remember sitting on the right hand side of the auditorium in St Michael’s Cave and I wanted ‘Tu’ to win but it came a very close second.

I still remember thinking, how can that be? Guy and Ronnie had success not just locally but also in the days of Cavan and the Castlebar song festivals in Ireland... remember ‘Padre’? And of course then there was their success with Jade when they penned ‘Nina no me comas el coco’. But this is not where I want to begin or the story I want to tell today. 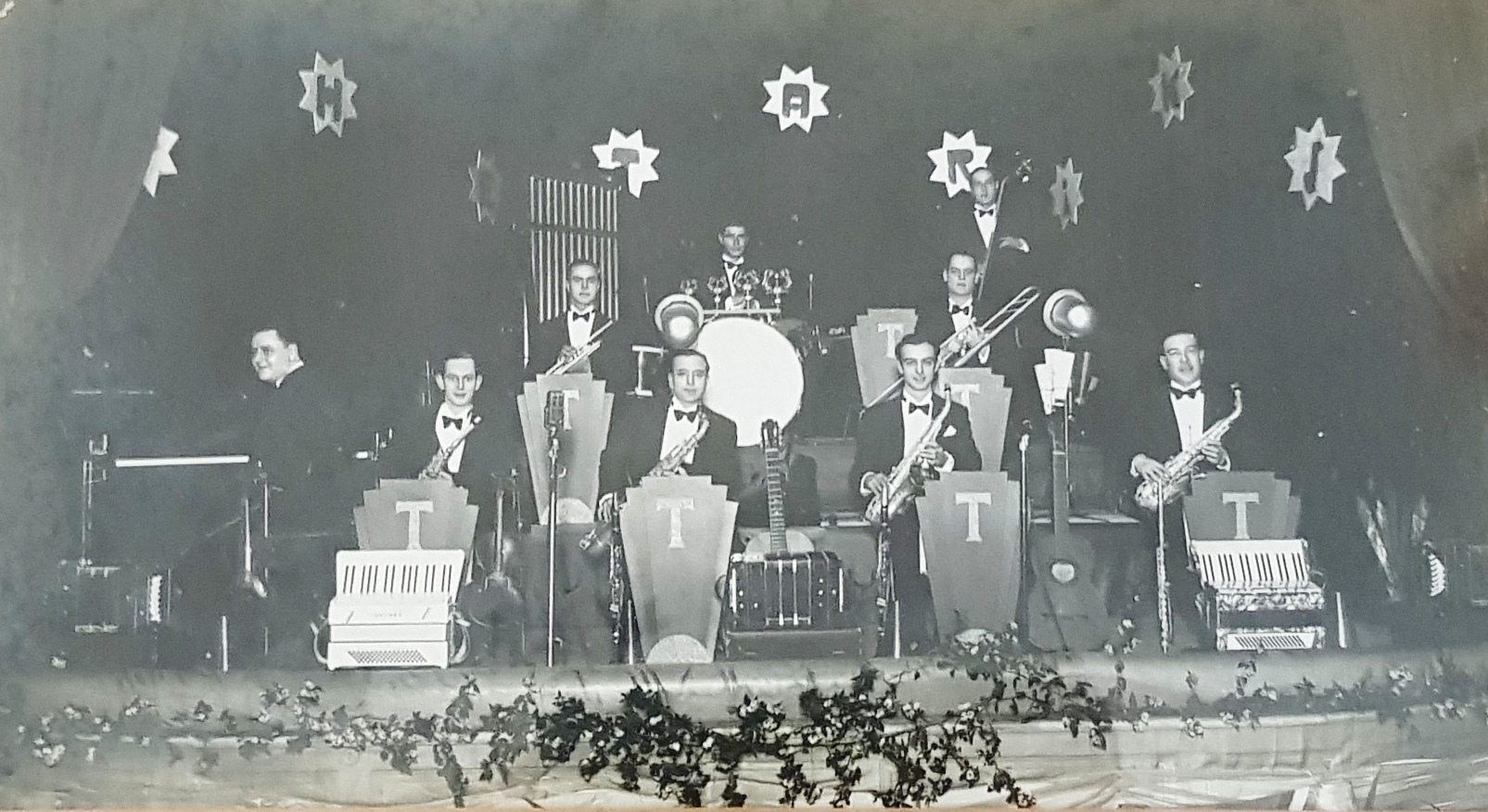 Sitting at my table is my great friend Guy Palmer. I have always lived just around the corner from him and he is someone I always enjoy long conversations with. It’s never two minutes. We mainly talk about music today, Eurovision and old tunes of yesterday. There are times we also try to put the world and Gibraltar to right or at least onto a better path.

Guy’s own music journey is long and varied both as a musician and a song writer but it begins with his father Agustus Palmer who was also a great musician. It certainly runs in the family... his son Guy of Melon Diesel fame and his son Nigel also well known in music circles.

This I know will not be an easy table chat just keeping to the subject will be difficult and neither of us are ever lost for words, in fact we can go on for hours and we do ... I gave in after a while, ‘there’s just no keeping this one short’, so this is the first of Guy’s table which I can assure you will pile on the memories. 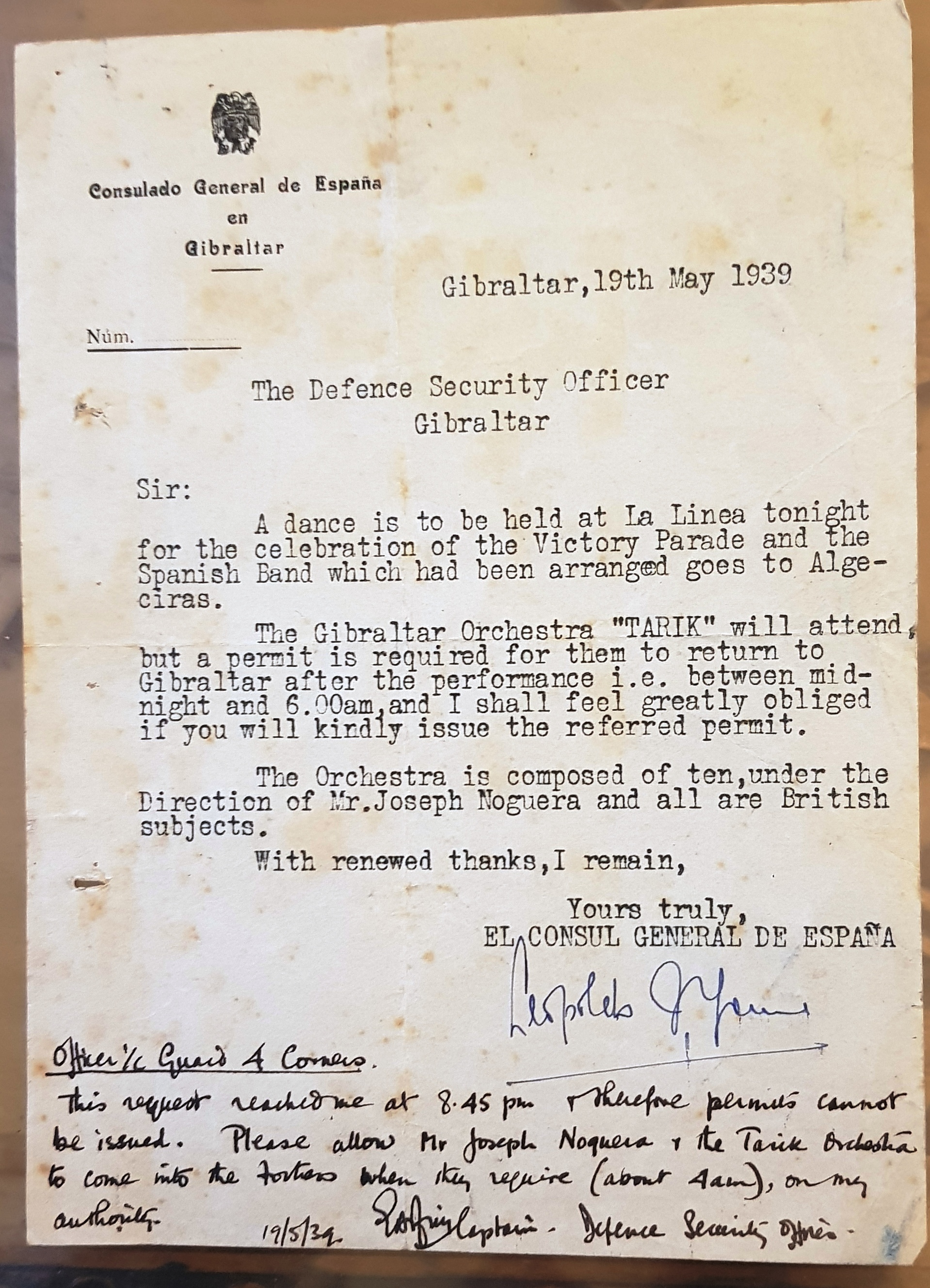 For him music has always been there. He knew he wanted to make music himself. His guitar his first love.

He took Spanish guitar lessons with the well known ‘el barbero’. A Spanish barber who taught many Gibraltarians in the fifties and sixties.

This man came in from Spain and taught flamenco and classic basic teachings. But Guy did not last long. He was listening to the sounds coming out of the UK and America: Tommy Steele, Elvis Presley and Buddy Holly. 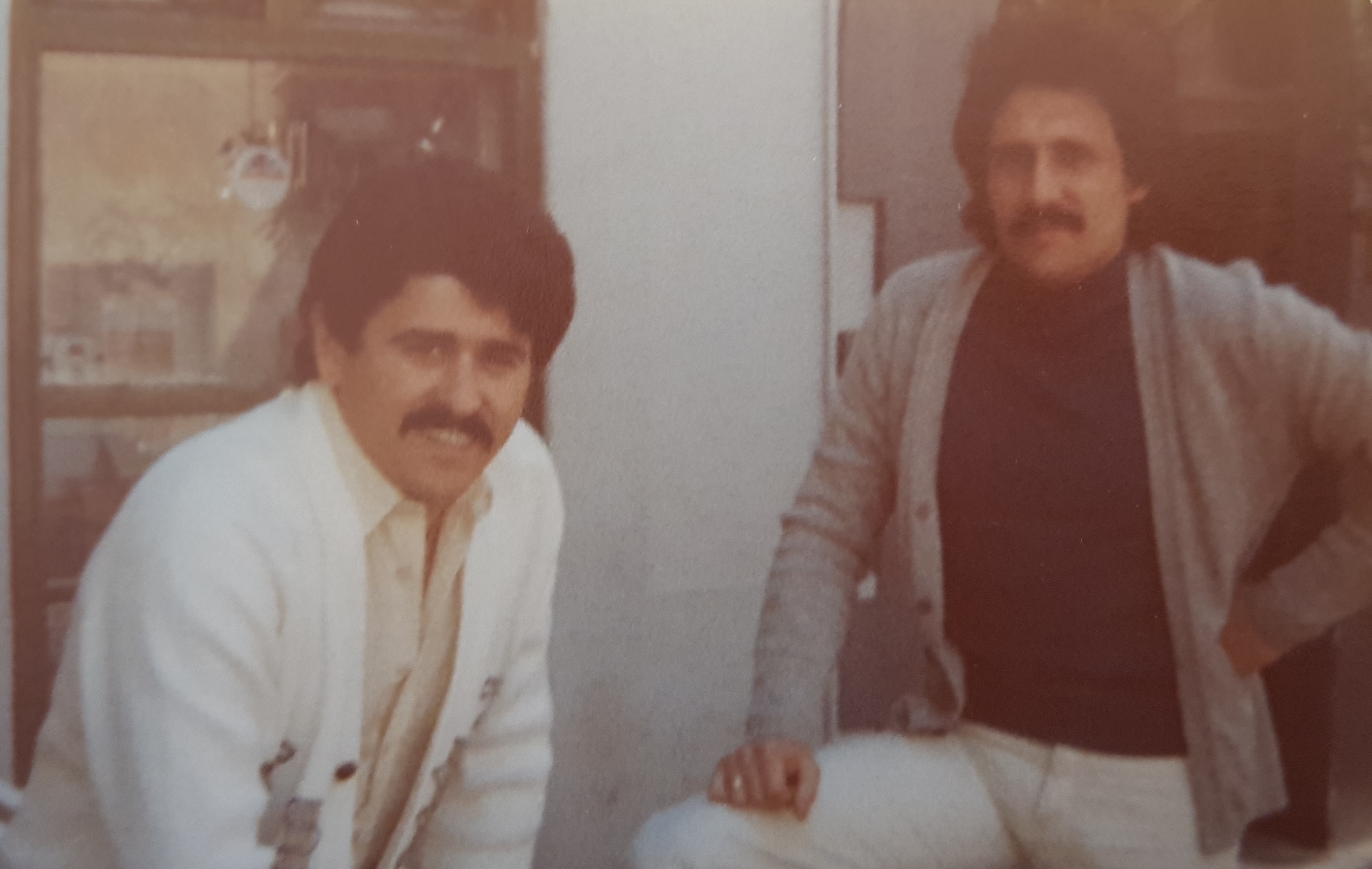 “Their music really hit me and I knew that the music I was learning was not what I wanted to do. This was not what they were playing. They were not playing the arpeggios but bashing away at the guitar with a plectrum. They were projecting themselves and they really made an impact.”

Guy plays by ear he does not read music but remembers his father Agustus could read music perfectly like many of his generation.

“He was a first time reader and hardly ever had to rehearse his part on the flute. He would be given the sheet of music and he would just play. He started learning the instrument at a young age and was taught by a regimental musician stationed locally. He would go on the bus from City Mill Lane to South Barracks to his lessons, not easy in those days. By the time he was 20 he was playing in several bands.”

At the start of the First World War Agustus Palmer was 11 years old. In the 1920s around the age of 14 he begins to play the flute and also masters the guitar, the accordion and the alto sax. In fact most musicians in those days were versatile and could play several instruments. 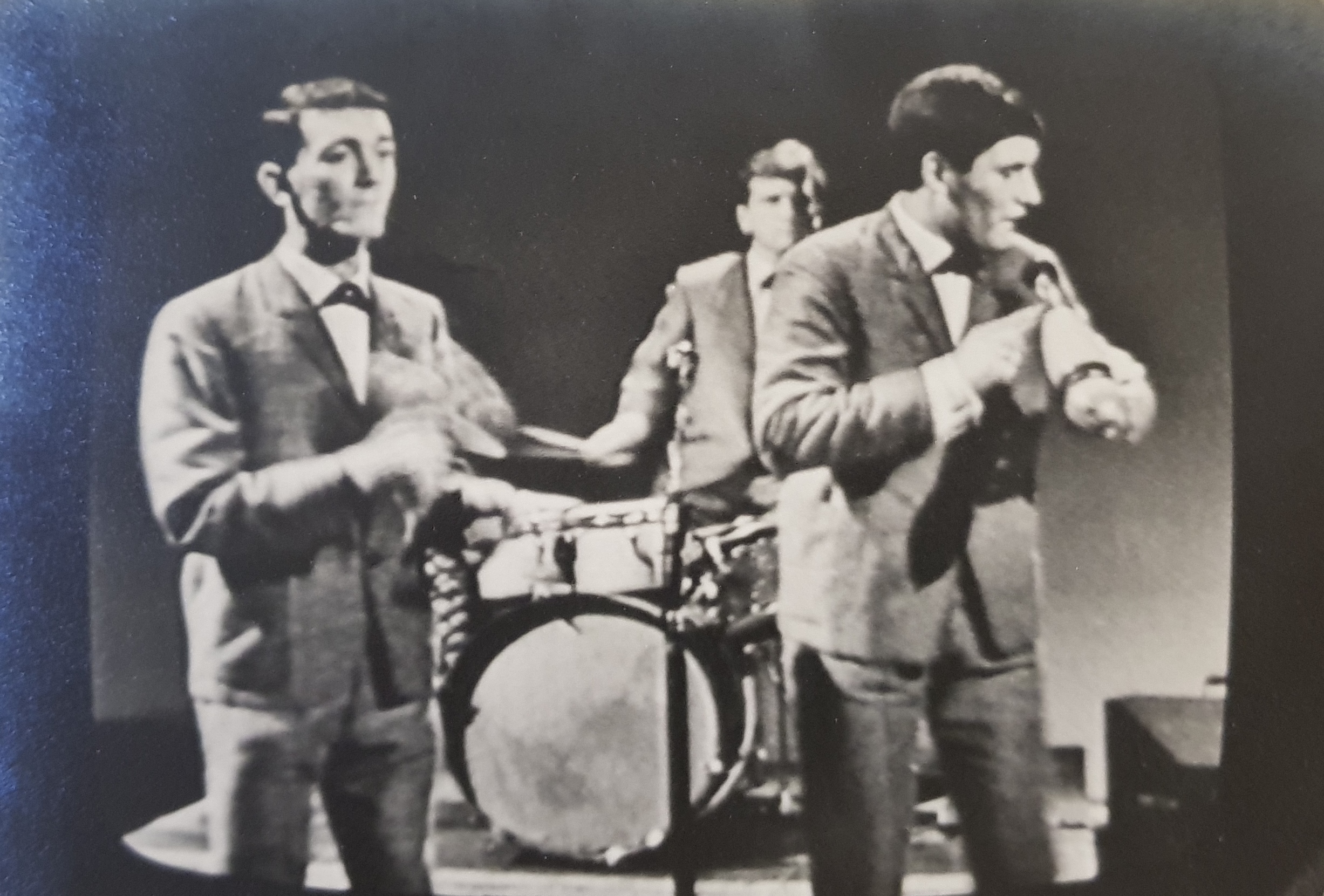 At a young age Guy’s father suddenly found he needed to provide for his family when his older brother left for America. He not only had a day job with the then Telephone Exchange but he also played music where he could after work.

The first known band Agustus played in was in 1931. It was the Sunbeam Band. Their debut was on 1 June that year at the Cafe Universal but they also played at the Trocadero and Winter Gardens.
“They loved their music but for them it was work and my father with other musicians would often accompany the cabaret acts, the dancers and chorus girls at the many music venues.”

Agustus Palmer would also have played with the Agrupacion Artistica Calpense orchestra when it was created in 1923. He would have formed part of the bands which took part in the religious processions and then eventually would play in the Gibraltar Symphony Orchestra when it was set up during WWII.

“My father played with every possible band and orchestra throughout the years until the creation of the ‘Tariks Dance Orchestra’ which would enjoy a very long residency at The Assembly Rooms – that was the place to go dancing then. The band was very popular between 1936 and 1938 and there can be no doubt they were the best band locally at the time.”

At the end of the Spanish Civil War they were invited to play in La Linea as part of the celebrations because the main band in the town had been called to Algeciras.

Guy still holds a copy of the letter sent to the Defence Security Officer in Gibraltar from the Spanish Counsel on the Rock seeking a special permit so the orchestra comprised of 10 musicians, under the direction of Joseph (Pepe) Noguera, could return to the Rock between midnight and 6am. The frontier gates then closed at midnight. Permission was granted.

Then during WWII with the thousands of troops stationed on the Rock it was not surprising that Agustus was actively playing in all the main cabaret venues. This was when he played with a combination of Spanish musicians and those from the regiments stationed locally and who would play in civilian clothes to entertain the troops.

One of the many anecdotes handed down by his father was the time he was playing in the Cafe Universal during WWII. The major hit of the day was Glen Miller’s ‘In the Mood’. The Services personnel only knew this song and all they wanted was to hear it time and time again.

“My dad’s band had to play ‘In the Mood’ most of the night, if not all of the night. One night there was a brawl between the Canadians and Australians and a soldier was hit and head went through the drum skin and he ended up with his head being banged by the foot pedal of Pepe Noguera’s drum kit. He could not stop the beat because if he had the situation would have got even more out of hand.”

Before, during and after the war there was a lot happening musically on the Rock.

“He used to take me and sit me in front. I always wanted to go and I used to see people like Pepe Noguera playing the drums, Pepe Luis Diaz on the double bass, always impressive and with tremendous ability.

“My father was lucky to be surrounded by such good musicians like Juan Bado on clarinet, Arturo Howes on trumpet, Tommy Scott on trombone and Pepe Noguera on drums and as director.

“They played everything in the book from the Tango to the Pasodoble, the Charleston, the Foxtrot and of course the Boogie Woogie which proved so popular during the war.”

Guy is keen to point out this was before rock ‘n’ roll.

“Instruments then were acoustic or brass and there were no electric sounds. We can easily forget this. These musicians had to know what they were playing.”

He recalls how later when he started to learn the guitar and heard his father practising he would try and accompany him without him knowing.

“One day he caught me and asked what I was doing. He could not understand it when I said I was accompanying him... ‘what did you say? You were trying to accompany me?’ he questioned... and rubbished the fact that I was playing by ear and not reading the music. But later on he gave me tips and helped me and came to accept this was a new era in music and musicians who for him were not ‘literally’ musicians also had a place to play in the music world because their capacity for composing and playing without even knowing a note of music was possible.”

Little did Agustus know that his own son would influence future generations of musicians and form part of some of the leading bands on the Rock for more than two decades and even compose music himself... remember the Echos, the Terriers, Seen ‘n’ Heard... and then there’s football... and there’s a whole lot more but let’s leave that for next time.