The recent video clip of PC Steve Peach playing boogie-woogie piano went viral so he was an obvious choice to be a featured officer.

‘That video was just a fluke,’ said Steve.

‘We had gone to St Joseph’s First School to talk to the kids about Online Safety and I saw the piano sitting in the corner of the room. It just seemed a good way of getting the kids’ attention so I just played a few bars of boogie-woogie and someone filmed it. The last time I looked, that video clip had been viewed around 15,000 times on Facebook.’ 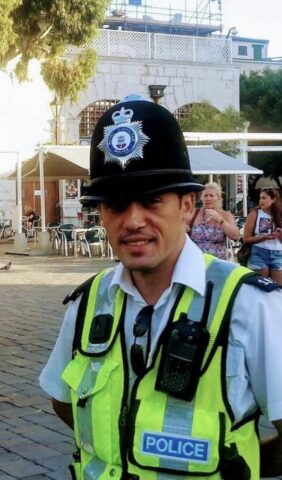 As a young boy growing up in south east London, Steve wasn’t sure whether he wanted to be a policeman or a musician. His father, Kevin, had a variety of jobs in the music industry, indeed, for a while he was even a member of the New Bay City Rollers, a band who might be remembered by our older readers, especially any Scottish ones. When Steve was 8, the family moved to the Rock to be close to the family of Steve’s mother, Rosemarie.

After his education at St Joseph’s and Bayside, he had a couple of short-term jobs before getting the career he had always wanted – he joined the RGP in 2010 when he was 26.

‘Since Training School, I’ve had a variety of jobs. I started, as we all did, by walking the beat but since then I’ve been in the Neighbourhood Policing Team twice and I’ve been a Schools Liaison Officer and in both these jobs I worked closely with the Youth Club and staff.’

'I’ve also worked in the Control Room at New Mole House which was a job I particularly enjoyed because you see and hear everything that is going on – you are at the centre of everything. You can be taking incoming phone calls from the public whilst trying to listen to our officers on their radios. There is a second radio channel which is used by other agencies so information is coming at you from all directions – and usually, senior officers and the Media staff are constantly asking to be kept informed so it can get pretty busy at times. When you’re working in the Control Room, there can be a lot of responsibility if you are directing officers how to react to an incident.

Some of these officers can be inexperienced so the pressure is on you to give them the best instructions.’
‘During my time in the force there have been several things that I remember with pride. On one occasion, Sgt Kevin Fortuna and I rescued a Cub Scout who was on a float when he was swept out to sea from Eastern Beach. We ran down to the rocks at the Caleta Hotel where we jumped into the water and we were able to pull him ashore.

‘There have also been a few domestic incidents which I feel we handled very well and those also gave me a lot of job satisfaction.

‘At times, I have acted as Station Officer and Patrolling Sergeant but, so far, I haven’t applied for permanent promotion because I still enjoy the job of a PC. I don’t rule it out in the future though!

‘As for the downsides, I try not to dwell on the bad things. Sometimes, like any other job, it can be frustrating. Police officers are often criticised by the public but sometimes we are criticised for things that are outside our control. People criticise the laws – but we don’t make them, we are just there to enforce them. Being such a small town, police work in Gibraltar can be challenging. We grow up alongside the same people who we may need to deal with in the street so it’s always important to be as respectful and professional as you can be.

‘And, of course, shift work can be tough, both for your personal life and for your family but, overall, it’s a good job. I go home most days feeling that I have helped a lot of people. This is definitely a lifetime career for me.’

And what about his piano-playing talents?
‘There was always music in my family. My grandfather player a bit of boogie- woogie piano, my mum was musical and, as a professional musician, my dad was often away touring with some band or other. He bought me my first guitar when I was only about 4 and I always wanted to copy him.

‘We always had a piano at home so I started to play stuff from a very early age.’

Amazingly, Steve cannot read music. ‘But I can listen to a song and then quickly learn to play it on the piano.’
‘For a few years, I was too busy with my job and with my young daughter. I used to do some cycling in order to relax but I’m now starting to enjoy my music again. I’m the lead singer and play keyboards for a band called 24Seven and, whenever the job allows, we play gigs in the area.’

‘As a kid, I always wanted to be a police officer and I loved to play music. So my advice to anyone is ‘Follow your dreams and never give up.”’

It sounds like Boogie Woogie Steve has really followed his own advice.

To see Steve Peach at the piano, follow the link to: https://www.youtube.com/watch?v=Dm37lsRklKs