Gibraltarian student Oliver Whitmore has been selected by the Commonwealth Youth Association (CYA) to represent Gibraltar at a meeting of the UK Youth Parliament which will assemble in the House of Commons chamber later this week.

This is the first time that anyone from Gibraltar has participated in the event.

Mr Whitmore was chosen after an essay competition the theme of which was the most important issue affecting young people in Gibraltar.

The meeting will take place on Friday and will include representatives of the UK Overseas Territories who will each have a two minute slot to raise the most important issue affecting young people in the respective territories today.

The speeches will be delivered from the despatch box and the session will be streamed live on Parliament TV. 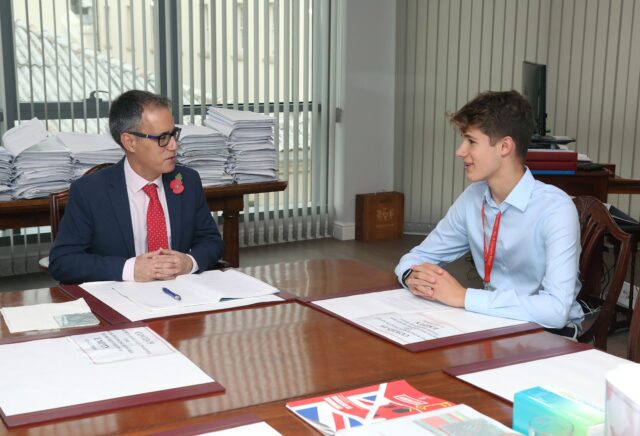 Mr Whitmore met with a representative of the CYA for guidance and advice beforehand, and also with the Deputy Chief Minister Dr Joseph Garcia.

“I wish Oliver well in his role as an ambassador for Gibraltar. I too was very impressed with his work and I am sure that he will do Gibraltar proud during the meeting and with the many contacts that he will come across there,” said Dr Garcia.

“This demonstrates both the eagerness of our youth to represent our country abroad, as well as the strength of our relationship with the United Kingdom and with the Commonwealth family. The Government is very grateful to the Speaker of the House of Commons Sir Lindsay Hoyle for the inclusion of young people from the UK Overseas Territories in this event,” he added.